Expansion of UNSC: an imperative 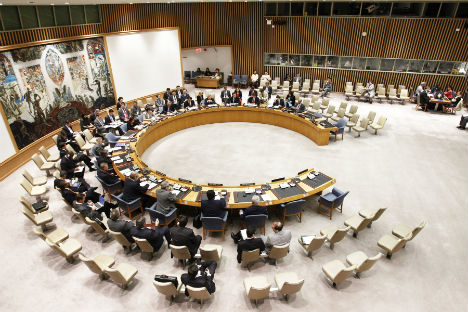 The most powerful world body should be expanded to respond to the emerging realities of the world. Of course, there are complexities in the process of expansion, but there are ways to get them round.

Can one of the most powerful world bodies be expanded to respond to the needs of the emerging world order? Lots of debates have taken place in this context. Countries all over the globe do not deny this emerging imperative, but the crucial question then rises why this has not been realized? As deliberated in the 8thintergovernmental meeting of the United Nations last week, the G-4 (Brazil, India, Germany and Japan) countries further reiterated their demand to expand the crucial body or the world has to confront the challenges at its ‘own peril’. One can juxtapose this assertion with the joint statement issued by BRICS leaders in their summit meeting in New Delhi last month, where they reiterated the importance “they attach to the status of Russia, India, Brazil, China and South Africa in international affairs and support their aspiration to play a greater role in the UN.” Interestingly, out of four members of G-4, two are included in the BRICS grouping, one of the most evolving bodies with rising prowess in the global arena.

A valid question may be asked – what prohibited the transformation of the United Nations Security Council since last sixty and odd years? The world has changed dramatically since then. The concepts of bipolarism and unipolarism have been made to disuse, and in its place the world has witnessed the rise of regional organizations and emerging powers. During the cold war, this body witnessed high politicization on ideological grounds. However, as the later developments suggested, this body was made prone to a statist agenda. The world has undergone a retinue of transformations since the end of the cold war. While the brief initial years stoked the myth of unipolarism to last long; such a myth vanished soon. The US power declined and as the financial crises displayed, the global balance of power shifted from West to East. The rise of powers like China, India, Russia, Brazil and South Africa (members of BRICS grouping), and the strengthening of regional cooperation formats such as SCO, ASEAN, APEC, and the increasing synergy of bodies like G-20 have indicated that the proliferation of global power is an inevitability, and the flow cannot be stopped by any power. The BRICS economy at its present rates of growth will likely surpass the economy of the developed north particularly that of the G-7 in near decades. As the BRICS leaders in the recent New Delhi summit insisted, the global order needs reformation. Whether it is the United Nations Security Council, or the global financial bodies like the International Monetary Fund and World Bank, the global bodies must reconcile to the emerging realities.

India’s permanent representative at the United Nations, Hardeep Singh Puri emphasized at eighth round of inter-governmental negotiations, on the question of equitable representation on and increase in the membership of the Security Council and other matters related to the Council, that the body must be transformed. This emphasis has primarily two components. First, the United Nations Security Council, which has a global nature, must be reformed so that the global governance architecture can be modified suitably to accommodate the rising aspirations. So far, the global governance architecture has been controlled by few dominant countries. It has not represented the diverse countries of the globe. In that sense, it lacks the democratic component. Second, the contemporary reality itself has held the mirror before the countries of the world. And in that mirror, the picture is asymmetric as it does not reflect the emerging realities of the world. Speaking on behalf of G-4, the Indian representative stated, “We the G-4 countries are convinced that agreement on the two key principles of expansion in both the permanent and non-permanent categories and improvement in the Council’s working methods would enable Member States to finally move towards real negotiations. We see the G-4 short resolution as a vehicle towards this outcome.”

The global developments, commonly afflicting the members of the United Nations, range from terrorism and religious fundamentalism to issues of climate change, arms and drugs trafficking, economic crises, for which the United Nations Security Council is poised to play a pivotal role. The unrepresentative character of this body prevents it to play such a role. Even from a pure demographic angle, the population of the world has increased manifold in the last sixty years. The rising aspirations of these people in developing countries and also their rising stakes in global decision making process have not been suitably addressed so far.

It is true that there are complexities in the process of expansion of this powerful body. The rivalry between aspirants and other aspects of geopolitical and geoeconomic calculus too have affected the evolution of a consensus to expand it. While India raises its stakes and demands that it should be included as a permanent member as it is the largest democratic country in the world with a burgeoning economy, its rivals think other way. Pakistan has a contrasting view as it sees India as a factor in prolongation of its conflicts with it. It also stakes claims to be a member, and it may not hesitate to play the religion card, which may appear justifiable from its national interest point of view. Similarly, while countries like Russia has strongly supported India’s candidature for a permanent seat in the Security Council, other permanent members like China has developed a very cautious attitude in supporting India’s candidature. The US too seems to adopt a statist approach in the expansion of the Security Council. The issue is then of coordination, and how the permanent members develop a consensus on this issue, which at present seems highly unlikely.

There can be an alternate mechanism in which the demands for membership of various countries can be dealt with. In fact, there are deliberations to develop such an alternate mechanism, instead of according veto power to newly included members. There can be tiers of membership, in which there can be permanent members with veto powers, and permanent members without veto powers, and there can be members on rolling basis without permanent status. This is undoubtedly a delicate issue, particularly so when the membership of the Council is made an issue in national interest. However, it is better to catch the bull by its horn and address the issue directly, rather than developing an ostrich eye in the manner of old statist thinking. In the context of relations among nations, and in the context of global order, things seldom remain static. The issue of expansion of the United Nations Security Council is no more confined to the domain of prudish debate and discussion. The international politics has come to such a stage, when this complex issue must be dealt with effectively and decisively.