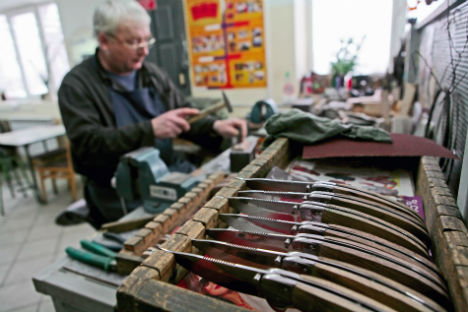 It’s hard to revive the magic of the Damascus steel. But in the Russian town of Vorsma, master craftsmen have perfected a new class of knives which is fondly called “Russian bulat” or “bulat damask.”

Blades made of the legendary Damascus steel have always been admired by real men. According to folklore, Damascus sabres were equally adept at cleaving the finest gossamer silk as they were at slicing through the red-hot barrel of a musket. Held in a stream, the blade would cut the leaves that floated by on the water's surface. The blade could be wrapped around the human waist and yet would retain all its properties on being straightened out.

Unfortunately, the secret of the magic steel has been lost. The pale imitations sold in the markets of the Syrian capital these days do not fool even the most naive of tourists.

However, what the Arabs forgot, the Russians, it would seem, have learnt. At the very least, the Runet bristles with adverts offering knives made of “Damascus steel.” Most of the master “blade smiths” are based in the settlement of Vorsma, the former capital of the Russian jack-knife (today's capital is somewhere closer to China).

A train to Nizhny Novgorod, followed by an hour's ride on a minibus, and I am in Vorsma. I wouldn't have been surprised if a gigantic cardboard knife had met my gaze as I entered this “town of master craftsmen.” But instead I was greeted by a snow-capped statue of Lenin at the entrance of a medical instruments factory. It turns out that Vorsma is renowned not only for its hunting and military knives, but also for its surgical scalpels.

Through the wooden and mainly one-storey village-type buildings, old women wrapped in shawls push self-made sledges — the local way of transporting kids and shopping bags. The usual despondency and desolation of the Russian provinces are lacking here. Quite the contrary, expensive jeeps plough the streets, and the houses are not even lopsided. The fences are tall and solid, the door frames beautifully adorned, and attached to the windows are rear-view mirrors to see who's knocking at the gate — another invention by the artisans of Vorsma.

Since the time of Ivan the Terrible, Vorsma has produced battle sabres for the Russian army. But sabres are no longer in fashion (apart from blunted souvenirs), and so the craftsmen have switched to knives. The local Saro plant makes fighting knives for special forces and ceremonial daggers for military officials, such as government couriers or migration service officers.

Vorsma used to manufacture more than 90 per cent of all jack-knives in the USSR. And not just your average penknives, but blades of the most intricate shapes that made even Kremlin leaders, well accustomed to fancy gifts, blink in amazement. However, most of the local rarities were plundered back in the days of perestroika. A few examples of these “wonder knives” have been preserved at the museum in neighboring Pavlovo. Here you can find on display a pig-knife, a car-knife, a book-knife (Gorky's “Mother”) and even a Lenin-Mausoleum-knife with 97 blades!

Such skill is now a thing of the past. Moreover, folding knives are very labor-intensive. These days a far bigger crust can be earned from forging and polishing simple Rambo-style hunting knives. Well, at least a new technique has been mastered — the production of Damascus knives.

“It's not strictly correct to label our knives 'Damascus',” says bladesmith Vladimir Maslennikov. "We have merely attempted to resurrect the technology that was used in times gone by. For a perfect result, we need different conditions: air temperature, humidity and metal source."

Instead of “damask,” which appears to have caught on, Maslennikov prefers the term "bulat". He even named his own knife-manufacturing firm “Russian bulat.”

Unlike cheap factory-made versions, the “bulat-damask” knife is hand-forged in a traditional ironmongery. The blade material consists of several layers of different steel alloys: spring, ball-bearing and high-carbon. This stack of metal is heated in a furnace and hammered flat. The resulting strip is cut, folded several times and hammered flat again. The process can continue until the metal strip has up to 500 layers!

In some cases, the strip is clamped in a vice and twisted into a “pigtail” to make the hammered pattern on the knife surface more spectacular. The final processing stage involves etching the blade with nitric acid for aesthetic purposes. Every pattern is unique, like human fingerprints. The knife is quenched and tempered in oil because water could cause it to crack.

Different metals wear at different rates, and the cutting edge undergoes the “micropyle effect,” meaning the knife doesn't need sharpening for a long time — it somehow sharpens itself. High-quality knives are the result — beautiful and comfortable to grip. The handles are made of birch bark, wood, horn or bone, and then patterned. We see demand not only in Russia, but also abroad. Why not sell around the world and live happily ever after? It's not that simple.

“I wanted to send a small batch of knives to Bulgaria,” recalls Artyom Okunev, owner of Albatross, a knife-manufacturing firm, “worth a mere $500. Our bureaucrats demanded 15 documents. I told them where to go when they asked for a sanitation and hygiene certificate for the box they were in. I buy boxes from a local shop. If you get them from a factory, the minimum quantity is 15,000! Where would I keep all these boxes?"

Back in the 19th century, not only did Vorsma knives compete successfully with English ones, they are even said to have flooded the markets of Britain itself. In Soviet times, large knives gave way to small folding types. Blades longer than the palm of the hand were considered cold weapons, and manufacturing them could land you in prison (although in their attics people continued making even sabers). Now the law is more relaxed. Even the sinister “Rambo” knife with a huge blade and serrated top edge — the sort made by armourer Anatoly Titov — is not a cold weapon by law. It is more a psychological weapon — pull one of those out and your opponent will die of a heart attack.

“Our problem is that we don't have the personnel. There's no one to do the work, since Vorsma doesn't even have a professional technical college,” says Titov. “We train apprentices on the factory floor. And there aren't many of them. Give it a few years and there'll be no one at all.”

It will probably be a few more years than that. Nevertheless, now is the time to buy a Russian-made Damascus knife before the famed art is forgotten or banned, or the skills and techniques are lost to posterity.