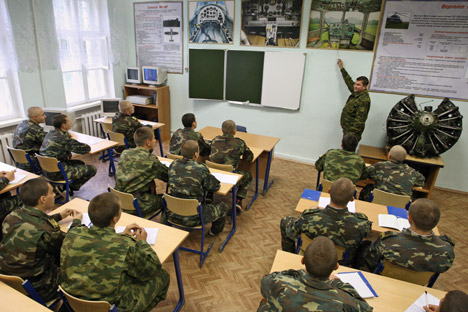 Creation of the unified English language course for all higher educational institutions of the Ministry of Defense is not a one year task. Source: ITAR-TASS

For the first time in the history of the Russian Armed forces the All-army Olympiad on foreign languages among cadets of military universities is being held in the Moscow Military University on April 18-21. In the course of the military education reform, the number of hours assigned on the study of foreign languages, has considerably increased. This has particularly affected the Universities of the Navy and the Air Force.

The All-army Olympiad on foreign languages was the final one in a series of cadets’ Olympiads on several subjects held this year on the base of the educational institutions of the Russian Ministry of Defense. Previous to foreign languages students saw who was stronger in mathematics, computer science, and history.

The Olympiad contains no mention of any specific foreign language in its name, but the choice of English is natural - due to understandable reasons. Today higher educational institutions of the Air Force and the Navy pay special attention to English. Future pilots learn the English language for radiotelephony with the Earth during flights - the regulations of the International Civil Aviation Organization (ICAO) are in effect in Russia from last March. According to these rules Russian pilots and controllers are obliged to speak English fluently.

English is necessary for future seamen in order to be able to conduct international radio during long voyages and to cooperate with the Navy of the US and the NATO countries as well as of their allies from Europe to Japan. For example, it was necessary in the course of joint exercises and operations with the Indian Navy. As a consequence, in the Universities of these arms of the service more hours of study are assigned for language training.

The reform of military education not only concerns the number of hours for linguistic preparation, but also their content. The military refuse the diversity of training courses in favor of a standardized course of "Military English", which may be complemented by various "blocks" depending on the depth of knowledge and profile of the University. This work is conducted by a new structure - the Linguistic Center of the Ministry of Defense. It became a united scientific-methodical center of language training and advanced training of servicemen.

Creation of the unified English language course for all higher educational institutions of the Ministry of Defense is not a one year task. The meaning of the Olympiad is not only a competition between the students (and teachers) of different military schools. It is necessary to find out the difference in the levels of preparation and to determine its reasons. In most cases the reasons lie in lack of practice, misunderstanding of teaching methods, and other gaps in the professional training of teachers of foreign languages.

Difference in the levels of students’ knowledge has its impact, too. Many military schools entrants who have grown up in Moscow and other large cities, speak English fluently enough - up to the level of bilinguals. First of all, this applies to those who have finished schools with profound studying of English (and the number of such schools has significantly increased) and who have been abroad when a child. But the level of foreign language teaching, especially in provinces, can be very different despite the formal increase of hours assigned for this subject. A mark in a school leaving certificate – whether it is a three or a five – means absolutely nothing. As a result, teachers are often faced with the task of quickly putting all the first-year students with absolutely different levels of the English language knowledge on one level. At the same time it is desirable to not reduce the level of those who speak English fluently. Today new methods of teaching are beginning their independent life and are passing their first serious test.

The first round of the Olympiad, which was participated by the students of thirty six Universities of the Ministry of Defense, ended on April 18. In this round cadets talked in English about themselves, their future profession and life, and fulfilled various written tasks. Later the competitors will have to write an essay, pass a competition on the best knowledge of foreign states and their armies, and the final task will be a team presentation on a professional theme. It is difficult to predict which military university will be the best, but in any case all the participants will learn useful lessons.