Russia searching for its course in the South China Sea 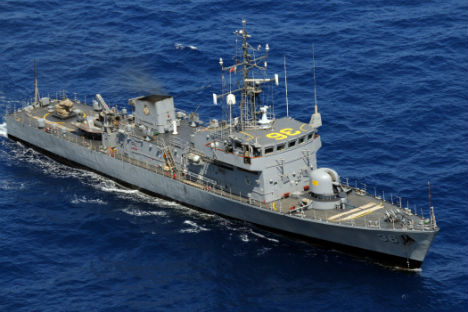 As the USA and the Philippines carry out joint military exercise in the South China Sea, the tension in the region mounts. Russia finds itself being drawn into the territorial dispute between China and its neighbours.

On April 18 the Armed Forces of the USA and the Philippines began a big joint military exercise near the disputable regions of the South China Sea claimed by China. Despite the assurances of the US Military Command that these maneuvers are not aimed against the PRC, experts consider these exercises to be part of a new Asia-Pacific doctrine of Washington aimed at suppression of the growing impact of Beijing. For the first time Russia also found itself involved in the rising disputes over the belonging of the South China Sea regions that are rich in energy resources.

The Balikatan (Shoulder-to-Shoulder) exercise that started on the Palawan Island and its surrounding areas will last till April 27. About 7 thousand men of the US and the Philippines military forces will be repelling mock terrorist attacks who will try to seize oil and gas facilities located in the sea. Besides the American and Philippine armed forces personnel, the military of Australia, Japan and South Korea will also take part in this exercise.

“There is no reason to believe that our actions may threaten anyone. Our task is learning to react to emerging threats and challenges,” Curtis Hill, a representative of the US Command, stated while answering the question about whether Beijing may perceive the Balikatan exercise as a threat to its security. Formerly similar maneuvers invariably evoked disagreeable reactions of the PRC which considered them as attempts of destabilization in the region with the USA involved.

This time the Balikatan exercise concurred with an aggravation of the old territorial dispute between the Philippines and the PRC that nearly resulted in an armed conflict last week. The incident involving ships of the Philippine Navy and a boat of the PRC Coast Guard took place in the South China Sea near Scarborough Shoal which is under the Philippine jurisdiction disputed by Beijing (the Chinese name of the shoal is Huangyan Island). The cause for the conflict was an attempt to detain eight Chinese fishing schooners made by the Philippine Navy flagship – the BRP Gregorio del Pilar – bought from the USA recently. They failed to arrest the Chinese seamen guilty of poaching corals, clams and sharks. Vessels of the PRC Coast Guard arrived at the place immediately and stood between the Philippine destroyer and Chinese boats. A war of nerves between Manila and Beijing continued for several days, both President of the Philippines Benigno Aquino Junior and the US State Department that called upon the parties to “show restraint and search for a diplomatic solution” were forced to interfere in the situation.

Though they managed to avoid a conflict, the tension in the situation with Scarborough Shoal is not loosening. PRC Foreign Ministry spokesperson Liu Weimin stated that “Huangyan Island is an indigenously Chinese territory” and warned: “We call upon the Philippine party not to allow any new incidents”. In his turn, his Philippine colleague Raul Hernandez urged the Chinese party to “stop intrusions and respect our sovereignty”.

Russia is being de facto drawn into the rising conflict over the disputed regions of the South China Sea that are rich in biological resources and hydrocarbons. Last week PRC Foreign Ministry spokesperson Liu Weimin for the first time ventured upon a veiled attack against Moscow. While answering a question about the recent agreement between Gazprom and a Vietnamese public company PetroVietnam about the joint development of licensed blocks 05.2 and 05.3 at the Vietnamese offshore area (for more details about the bargain see Kommersant issue dd. April 6) the Chinese representative practically reprimanded Moscow: without naming Gazprom directly he called upon companies from third-party countries that are not related to the South China Sea to stay away from the disputable regions and not to participate in their development till the territorial issue is solved. In the past the PRC strongly opposed to the participation of a leading Indian public company ONGC Videsh Limited in the development of Vietnamese oilfields.

A special acuteness is added to the situation by the fact that the new controversy between Moscow and Beijing was revealed on the eve of the tripartite meeting of the heads of Ministries of Foreign Affairs of Russia, PRC and India that took place in Moscow. While answering Kommersant’s question about the last Chinese demarches External Affairs Minister of India Somanahalli Mallaiah Krishna who took part in the negotiations called the work of Indian company ONGC Videsh Limited in the region a “strictly commercial activity having no hidden political motive”. The Minister referred to the statement made by the PRC Foreign Minister at the recent ASEAN meeting who was forced to admit that “there can be no restrictions of trade and business activity in the international waters”. According to Mr. Krishna, Indian companies will continue their work in the disputable regions of the South China Sea.

No official reaction of the Russian party to the statements made by the PRC Foreign Ministry has been voiced yet. Nevertheless later in April a joint exercise of the Russian Navy and the PLA Navy called “Maritime Cooperation 2012” will take place in the Yellow Sea, near the Chinese sea coast. This is a planned exercise. However, experts warn: in the current situation of aggravation of the struggle for control over the resources of the region China may well use these maneuvers to promote the thesis that Russia plays on the same side with them. Though that is quite a different question about whether such an interpretation is advantageous for Russia itself.

Russian text is publihsed in Kommersant