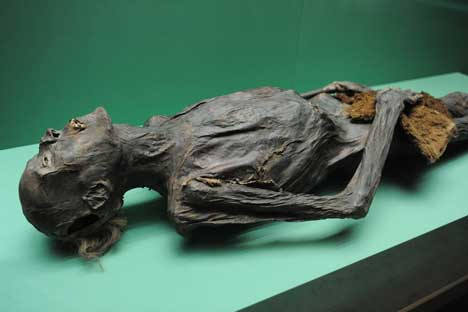 In this latest installment of the Russian Dozen, RIR explores six monuments from the time when Russia was inhabited by early primitive peoples, and six ancient Christian monuments created by the ancestors of the Russians.

Dolmens are ancient megalithic structures, meaning they were built of huge stones or stone slabs. They cover an extremely wide geographical area: from Portugal to Korea and from Scandinavia to Africa. In Russia, dolmens are the oldest structures made of stone and are concentrated mainly in the Caucasus. A few can be seen in the Urals, Siberia and the Far East. The exact purpose of dolmens is still not clear. For example, some Caucasian dolmens are hollowed-out stones with a giant rock as a lid. An almost perfectly round hole runs all the way through this kind of stone house, yet the diameter is not large enough for even a child to pass through. No human remains were found inside. These mysterious dolmens have long attracted fans of all esoteric things, hoping to draw energy or wisdom from the ancient stone memorials.

The term petroglyph is used to describe an image carved in stone. They exceed dolmens in terms of geographical scope, and some date back up to 40,000 years. In Russia, petroglyphs are distributed mainly in southern Siberia (Buryatia and Khakassia), as well as in the Urals. But the most impressive rock reliefs are preserved in Karelia (north of St. Petersburg). Petroglyphs carved in stone on the shores of Lake Onega form a continuous belt stretching more than 12 miles and comprising about 1,200 figures and symbols. The carvings depict birds, wild animals, fantastic creatures, people and boats. The figures are up to 13 feet tall.

It wasn’t only the Egyptians who preserved the bodies of their dead. In Siberia, the practice of embalming deceased elders was also common, mainly among the ancient cultures of the Altai region. Most of the time, however, there was sufficient embalming solution to preserve only the face, which was also encased in a specially designed mask, rendering the true countenance. The craftsmanship of these masks is so precise that they reveal an exact portrait of the ancient inhabitants of Siberia. The real gem of the Russian collection of mummies is the Ukok Princess, who lay buried deep in the ice for 25 centuries. One arm of the mummy clearly bears numerous artistic tattoos.

Kurgans, or burial mounds, are perhaps the most common type of memorial grave. They exist on all continents except Australia and Antarctica. In Russia, they are concentrated in the Caucausus Republic of Adygeya, along the banks of the Volga, and even around Yaroslavl and Moscow. The most famous Russian burial mound is the Maikop kurgan. The objects inside it represent some of the most ancient Bronze Age monuments found anywhere in the world; they are now housed at the Hermitage museum in St. Petersburg. However, such finds are not possible at the majority of kurgan sites: most of the time, the kurgan was heaped on top of the ashes of a chieftain’s funeral pyre. This impressive burial ritual, whereby the body of the warrior was cremated together with his wives, horses and possessions, is depicted in the famous painting "Burial of a Russian Noble" by the artist Henry Semiradsky.

The custom of dedicating idols to the spirits of ancestors came to the nomadic tribes from the steppes of Mongolia. In Russia today, the most famous ancient statues are those erected in the 9th-13th centuries by the Polovtsians, a tribe of Turkic origin, which dot the southern steppes from the Altai Mountains to the Ukrainian border. The title baba stems from a Turkic root meaning "father." However, in the modern Russian vernacular the word is used as a synonym for "woman," and quite a few of the sculptures depict the female form. The Polovtsian babas were not tombs, but in some instances it was believed that they stood as sentries on the border between the worlds of the living and the dead, keeping the latter at bay. Sometimes a group of such statues facing east formed a sanctuary, around which a magic circle was laid out.

The first stone labyrinths of Karelia, built in prehistoric times by unknown tribes, were discovered in the 16th century. Even then, the local Sami people called them "Babylons." Such labyrinths are located near the White, Barents and Baltic Seas. Generally, they are sited on islands, peninsulas or estuaries; sometimes they are scattered in isolation or, as on the Solovki Islands, comprise a large group with heaps of stones and long walls made out of boulders. Their exact purpose is still not clear: theories abound that they were burial shrines. Some allege that mazes were built so that the souls of the dead could not find their way back to the living world; other theories hold that they were a place for the young to perform ritualistic dances. However, it is most likely that the spiral labyrinths were constructed in honor of the gods of the sea, entreating them to provide more fish. Perhaps that is why they are often found in the vicinity of fishing regions.

As soon as it was founded in the mid-9th century in northwest Russia, Novgorod began to compete with the other major political center in the region, Kiev. In particular, this rivalry manifested itself in the construction of beautiful buildings, of which Kiev had plenty. Therefore, when the Orthodox believers in Kiev built a huge church in honor of St. Sofia, decorated with mosaics, Novgorod immediately set about erecting its own “Sofia.” Today, this cathedral is the oldest monument of Slavic architecture in Russia (it dates from 1050). Its narrowness and upward striving (as opposed to the more thickset proportions of Byzantine churches) set the template of Russian church architecture for many centuries to come.

The use of birch bark as a writing material in Ancient Rus had long been known, and even special sticks for such purpose had been found, yet only in 1951 did the first written sample come to light. The period since then has seen the discovery of thousands of birch-bark documents, dating from the 11th century to the 15th century. Their diverse contents range from business records and debt receipts to love notes and children's drawings and writing exercises. The variety of documents and the common names found in them indicate that the people of Novgorod at that time were almost universally literate. Of course, birch bark was used as a writing material in other cities, including Moscow. But only in the unique swampy soil of Novgorod was birch bark preserved in such vast quantities.

The white stone churches of Vladimir and Suzdal, built in the 12th and 13th centuries when Prince Andrei Bogolyubsky moved his capital from Kiev to Vladimir, represent a particular phenomenon in the Russian architecture. The carved decoration is popularly considered to be an authentic example of innate Russian ornamental technique, although according to legend European master craftsmen were sent to work in ancient Rus by Frederick Barbarossa on the order of Prince Andrei. Today, five of the churches still stand: the Assumption Cathedral in Vladimir (which later served as a model for the Cathedral of the Assumption in the Kremlin), St. Demetrius Cathedral in Vladimir, the belfry and part of the gallery at Bogolubovo, the famous Intercession on the Nerl (the most elegant cathedral in all of Russia) and St. George's Cathedral in Yuryev-Polsky, decorated with a solid white stone ornaments, interwoven with figures of saints, human faces and images of fantastic creatures.

Among the unique objects of art that existed only in medieval Russia, the “fire-gilded” gates stand out for their eye-catching beauty. To date, only a few masterpieces of this kind have survived: the gates of the Cathedral of the Nativity in Suzdal, and the gates of the Annunciation and the Assumption Cathedrals inside the Moscow Kremlin. Their gold finish has not tarnished in more than 500 years. But, when admiring such splendor, do not forget that the lustrous shine of each gate cost the life of the craftsman who produced it. Fire gilding is the oldest known method for gilding large surface areas. It consisted of applying a special lacquer to the surface of the metal, on which a pattern was engraved, before covering the whole gate with high-grade gold dissolved in mercury (amalgam) and placing it in an oven until the mercury evaporated. The craftsman had to monitor the oven temperature and the process of evaporation in the furnace, which often resulted in fatal poisoning. The same technique was used in the 19th century, too, in gilding the domes of St. Isaac's Cathedral in St. Petersburg and the Cathedral of Christ the Savior Cathedral in Moscow.

Closely associated with Byzantium because of their embrace of the Orthodox faith, the Eastern Slavic states sought to emulate its prowess in all forms of art. One area in which this is apparent is in the creation of lavishly illustrated manuscripts. Although they were created throughout the Slavic world, it is in Russia that the oldest illuminated manuscript in the East Slavic language has been preserved – the Ostromir Gospels. The manuscript dates from the year 1057, and before the Novgorod Code was discovered on wax tablets in 2000, it was considered the oldest Slavic book in existence. The text of the Ostromir Gospels consists of 294 pages, decorated with miniatures of the Evangelists, initials and headpieces. This year, the manuscript, which is kept in the National Library of Russia, was listed in the UNESCO Memory of the World Register.

The icon of St. George

The Russian icon occupies a special place in the modern cultural world: spanning a thousand years of unbroken tradition. At the early stages of Russian painting, it was almost indistinguishable from contemporary Byzantine icons. Nevertheless, specialists in the field have identified certain traits (for example, the depiction of the eyes) that could potentially be used to separate Russian and Byzantine works of that period. And if their conclusions are to be believed, the oldest Russian icon in existence currently resides at the Assumption Cathedral inside the Moscow Kremlin. It depicts St. George the Dragon-Slayer and was created in Novgorod in the late 11th or first half of the 12th century. In creating this image, the icon painter clearly sought to imitate the Byzantine mosaics in St. Sophia’s Cathedral in Kiev. It is likely that the icon was moved to Moscow by Ivan IV (the Terrible). A written record was kept, but it was only in the 19th century that the icon itself was rediscovered by chance during the restoration of the Virgin Hodegetria icon, which was painted on the reverse side and also dates back to the 12th century.