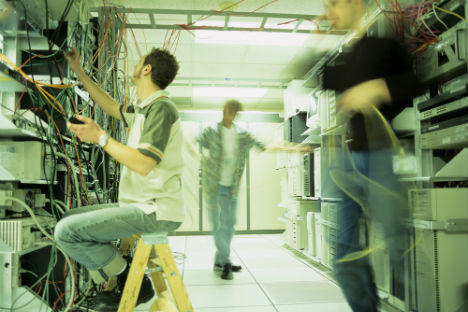 Software developers are enjoying higher salaries than they were a year ago, but their companies' executives continue to convince the government to make IT-friendly policies.

IT companies' executives still continue to feel the pain of hitting their heads against a wall trying to convince the government to make IT-friendly policies. That's the upshot of the annual presentation given Wednesday night by Russoft, an association of more than 80 software product and service companies. Though the firms in Russoft's latest survey reported an average increase in revenue of 30% for 2011, the developers gave middling marks to state support of the IT sector.

Despite bureaucratic neglect, companies in the sector are paying and hiring more.

The survey of 120 companies ― those working in Russia to create software and related services for export, as well as for domestic customers ― showed that salaries rose sharply across various positions. Managers had a pay increase of 45%, from an average of $1,860 per month to $2,700, Russoft survey results showed. Experienced developers saw their salaries rise 50% from an average of $1,600 to $2,400 while entry-level developers had an increase of 24%, from $765 to $950.

The companies also were hiring last year, increasing headcounts by up to 15% on average.

One factor behind the salary jumps was a decrease in federal payroll taxes — also known as the social tax — specially created for IT industry companies via amendments to the federal Tax Code that took effect last year. Their rate was lowered from 26% to 14%.

In a generally very competitive labor market for good engineers, companies that saw their tax burden reduced passed on some of those savings to their employees. Meanwhile, more small IT businesses began to take advantage of the benefit, as the headcount required to get the special rate was lowered from a minimum of 50 employees to 30.

Another success for the industry's government relations in recent months included a meeting in Novosibirsk in February with Prime Minister Vladimir Putin to discuss a proposed protocol ― a measure to be handled by the White House, not the State Duma ― that aims to increase the government's effectiveness in using information technology. Speakers at the Novosibirsk round table where Putin participated included Russoft president Valentin Makarov.

But executives from leading software companies said the government needs to improve education, customs procedures and other bureaucratic elements to make them more attuned to the information technology industry. It also needs to speed up work on the White House protocol, they said.

Andrei Sviridenko, chairman at voice and video software company Spirit DSP, said after the news conference that several IT associations are working on the protocol along with the Economic Development Ministry. Sviridenko, who helped prepare part of the protocol, said contributors include Russoft, developer and programmer group ARPP and ApKit — an association of IT companies whose members include Krok, Kaspersky Lab, Microsoft Russia and Xerox CIS.

With Putin's return to the presidency, there shouldn't be problems in maintaining support for the protocol, Sviridenko said. The "key people" will still be in the government, he said. "They will just be changing titles and jobs."

In addition to expanding formal support of federal ministries, the software developers also have sought — but so far not managed — to have the value-added tax effectively nullified for developers selling directly to consumers. Another unmet goal, according to Russoft's report, is equal tax treatment of both software-service providers and software-product companies regarding export VAT.

A number of IT-friendly measures, including reductions in VAT and corporate income tax, are available at the Skolkovo Innovation Center — the technology hub founded by President Dmitry Medvedev.

Alexander Turkot, the head of the IT cluster at the Skolkovo Innovation Center, said they are not targeting outsourced development. "We aren't trying to work in the offshore industry," not even in research and development, Turkot said in a telephone interview Wednesday.

"We can't compete with China and India," he said, because Russians are far outnumbered.

Russia does have a well-educated base of IT professionals and Skolkovo expects the companies in its IT cluster to make "quality products," he said.

Skolkovo is incubating companies creating their own intellectual property, which they will own, license and market. With offshore projects, when "the project finishes, except for the salaries, nothing remains in Russia," Turkot said.