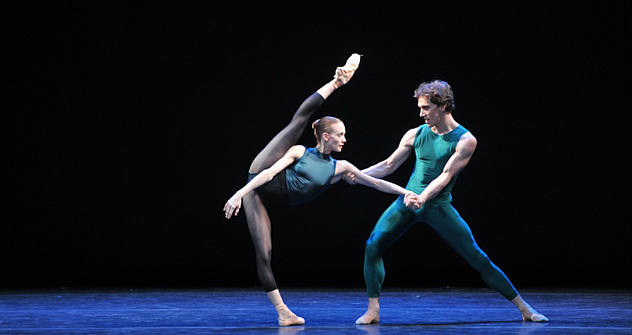 Many American children take ballet lessons as part of their education or for exercise. Few choose it as their life’s passion. In some countries, however, many children dance as their life depended on it – and it some ways, it does.

Larisa Saveliev, a former dancer with the famed Bolshoi ballet, is trying to bridge those two worlds. She is head of the New York-based Youth American Grand Prix (YAGP), a competition that is designed to take young dancers from around the world and give them the chance to study with some of the world’s leading ballet companies.

“The most talented children come from the poorest places,” Saveliev said. “They say the artist should be hungry - there is truth to that. For example, there is crazy talent in China. For them it is a chance to advance and there are so many of them. Americans dance for the figure, health and for education purposes, but in some countries, they dance because it is their only chance.”

Since its founding 13 years ago, the Youth American Grand Prix has awarded over $2 million in scholarships for young talents to study at the world’s leading dance schools, giving around $250,000 in grants annually. It has launched the careers of determined students who now dance with such companies as American Ballet Theater, New York City Ballet, San Francisco Ballet, Washington Ballet and Stuttgart Ballet. For some of them, dancing is a way to escape from tough economic circumstances and into a better life.

Every year, the YAGP ballet competition attracts around 300 students aged 9 to 19 from countries around the world. Students are preselected in semifinals in their home countries before coming to the finals in New York City. When the finalists arrive in New York, they compete in front of judges from Britain’s Royal Ballet School, the Italian La Scala Ballet Academy and Russia’s Bolshoi Ballet Academy, among others.

Saveliev and her husband Gennadi, a dancer with the American Ballet Theatre who helped her launch YAGP, moved to the U.S. in the mid-1990s. At the time, Russia was plagued by hyperinflation and arts organizations were struggling as state support dried up.

“When I came to New York I felt like [I was] at home, '' Saveliev said. “And I love Moscow very much, we often come back. I think I could live eather in New York or in Moscow. ''

Saveliev was passionate about two things: ballet and children. Both of her parents were teachers, which encouraged Saveliev to teach ballet once moving to New York rather than continuing to perform.

As a young dancer in Russia, Saveliev was exposed to local ballet competitions and performances that helped young ballerinas advance in their careers, and it was this experience that inspired her to create a program to expose young dancers from all over the world to high-level competition and training.

However, like almost all non-profits in today’s economic environment, YAGP is struggling every year to break even. Currently, YAPG has four people on its staff and contracts with outside companies to run the events and tryouts.

“If I knew it would be so difficult I would not do it,” said Saveliev, she added that even though the YAGP organization is wider known now, it is harder to find sponsors for the program. It is only Saveliev’s passion for dance and its ability to change lives that drives the competition.

“Sponsors they are like dinosaurs they are dying out,” said Saveliev, “We are wider known now, but it is harder for us to get sponsors than it was five years ago when people knew less about us; it was a different economic situation.”

Saveliev has received several proposals to film a reality TV show at YAGP, but so far she has not been impressed by any of the offers.

The long-term support for YAGP comes from the board of directors, which is made up of people committed to ballet and art, many of whom are also are on the board of American Ballet Theatre and the Metropolitan Opera. Companies connected to ballet, such as producers of ballet costumes and shoes also donate to YAGP, but the competition does not attract big-name sponsors.

If a finalist cannot afford to come to New York for the finals, YAGP sponsors this child. Sometimes the family of one participant pays the way for another finalist. “There is no child that could not come because of the money. We’ll make it happen,” Saveliev said.

One of the organization’s biggest fundraisers is its annual gala in New York, at which finalists in the competition perform on stage with famous dancers. This year’s gala is also sponsored by Russian Standard vodka, the New York restaurant Café Pushkin and the Russian TV channel NTV.

The YAGP competition week culminates in a grand performance, held this year at Lincoln Center on April 27. Tickets range from $45 to $150, but the sales will not cover the cost of the event.

“YAGP is good because it gives opportunity for me and other directors to see students from everywhere in the world,” said Franco de Vita, principal at American Ballet Theatre school, “I give minimum two or three scholarships every summer to students from YAGP.”

Franco de Vita, a dance teacher and now principal at the Jacqueline Kennedy Onassis School at American Ballet Theatre is surprised how quickly YAGP has grown.

“Larisa (Saveliev) has a lot of enthusiasm and vitality, that is the reason for success,” de Vita said. “she remembers names of all her students and all different people, that is very important in the dancing.” De Vita’s school gives five scholarships a year to YAGP participants.

Dallas, Texas native Joy Womack, 17, is now studying at the Bolshoi Ballet Academy in Moscow. She took part in her first YAGP competition when she was 12 and was immediately invited to study at the Kirov Academy of Ballet in Washington, DC.

After studying there for two years, she received an invitation to join the Bolshoi Ballet Academy and even though the state-sponsored academy did not provide scholarships for Americans. Sponsors helped pay for Womack’s education at the Bolshoi Academy and recently won the YAGP European semifinal competition in Paris.

“Larisa Saveliev is very talented, very well connected woman,” said Womack, “ She introduced me to the jury in the competition. A lot of people before did not know who I was before winning that competition. It was nice to have some recognition.”

Womack said that the group of judges was incredible; she received a lot of positive feedback and confidence to push further.

“YAGP is a great launching pad for a career,” said Womack.

For more information and tickets to the YAGP gala, click here.