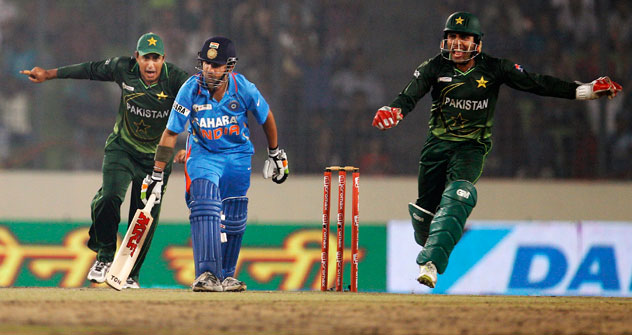 Cricket is often used as a diplomatic tool to foster relations among nations in the South Asian region, particularly in the context of Indo-Pak relations.

Symbols play a crucial role in South Asian politics, particularly in relations among the nations. The recent court order in Bangladesh further corroborates this viewpoint. The court order postponing the visit of the Bangladesh cricket team to play international cricket in Lahore has received strong responses from Pakistani cricket establishment  with the use of terms such as ‘extremely disturbing,’ ‘jeopardizing the cricketing relations’ and ‘shocking,’ which may have wider political implications for the relations between the two countries. The media in Pakistan have also widely covered the developments. It is true that the games like cricket do not solely determine the relations, but they reflect the undercurrents shaping the relations and also partly reflect the situation on the ground.

There are many instances, particularly in the context of Indo-Pak relations, when cricket is used as a diplomatic tool to foster relations. In some cases also the game plays the role of spoiler by developing ‘winner’ and ‘loser’ sentiments across these two nations. It is as if the two cricket teams represent two nations. While from a rationalistic point of view, this may not be explained, but in reality games like cricket play a dynamic role in relations in South Asia. The watchers of India-Pakistan relations are well aware how the Pakistani dictator Ziaul Haq accepted the invitation of then Indian Prime Minister Morarji Desai and visited Indian city of Jaipur in 1978 to watch cricket match between India and Pakistan. Though the visit did not cut much ice in the relations, but it certainly strengthened the perception that such sporting events can be promoted to foster bilateral relations. Such instances in international scene too are numerous. The ping pong diplomacy between the US and China in early 1970s to break logjam in bilateral relations is well known. However, in the context of South Asia, the game has certainly played a special role in determining the relations. Last year in March, Indian Prime Minister Manmohan Singh invited his Pakistani counterpart Yusuf Raza Gilani to watch the semifinal world cup match between the two countries at the Indian city of Mohali. Gilani was highly optimistic about the bilateral relations and his pronouncements during the visit with regard to promoting bilateral friendly relations were given wider space in Indian media. Manmohan Singh’s well known phrase of ‘moving extra mile,’ appeared to have been suitably responded by Gilani, though his powers have been curtailed by other branches of Pakistani establishment. Pakistani President, Asif Ali Zardari during his pilgrimage to India early this month too emphasized during his dialogue with Manmohan Singh on reviving cricketing ties between the two countries.

Pakistan has one of the best cricket teams in the world. But its image in international arena as a peaceful and stable nation has been viewed negatively in many quarters. It is primarily on this ground that the high court in Dhaka, on the case filed by one Dhaka university teacher and a lawyer, postponed the visit of the Bangladesh team by four weeks. Earlier the coach of the Bangladesh team, Stuart Law had expressed reservation against the visit. The attack on the Sri Lankan team in March 2009 by terrorists in the city of Lahore (the place where Bangladesh team was supposed to play two matches on 29 and 30 April 2012; the first one being 50-over match and the second one being the 20-20 international match) too has magnified such an image of Pakistan. Despite heavy security provided to the Sri Lankan team, the terrorists managed to kill six police officials besides injuring some members of the cricketing team. Pakistan was banned by the International Cricket Council as an unsafe place to conduct international cricket. The planned Bangladesh visit, and its possible successful play on the Pakistan ground without any terrorist attack, could have salvaged significantly such a negative image of Pakistan. From that point of view, the postponement of the visit of Bangladesh team would jolt the efforts of Pakistan cricket board to revive its image as a safe cricketing place. From that perspective, the outrage among the members of cricket board of Pakistan including its Chairman is understandable.

This development, which from a sports’ point of view, may not appear that destabilizing but given the fact of the tumultuous past between these two countries such a development will definitely affect the relations. The statements from Pakistan cricketing authorities appear harsh. The former Pakistan cricket captain, Asif Iqbal said, “Bangladesh Board has made a joke of Pakistan cricket … the PCB (Pakistan Cricket Board) should take them to the task because they are responsible.” The Chairman of PCB, Zaka Ashraf stated, “It is astonishing to note that a matter lacking any legal issue has been dragged in the court by petitioners who appear to have vested interest and want to jeopardize the Pakistan-Bangladesh cricketing relations.” The present democratic regime of Bangladesh under Sheikh Hasina has adopted a different strategy from her predecessor Khaleda Zia, and is more interested to promote a secular and growth-oriented image of Bangladesh. Bangladesh on 18 April 2012 opened Pakistan chapter of international forum for secular Bangladesh in Karachi. Pakistan’s former attorney general and also federal minister Syed Iqbal Haider, who was made president of the forum, observed “I’d definitely compliment the people of Bangladesh who have been successful in all respects to get rid of terrorism and militancy that was sponsored by Pakistan at the behest of our establishment.” Hasina’s policies of developing friendly relations with India, and her recent invitation to the Indian war heroes during liberation war of Bangladesh in 1971 in order to award them, may not go well with some sections of Pakistan establishment. This development in cricket relations will likely further jeopardize the relations.

The recent development will further burden Pakistan’s efforts to salvage its image as an unsafe place for international cricketing, and also affect its relations with Bangladesh. It also adds to the argument how symbolism in South Asia has much to do with politics in the region.