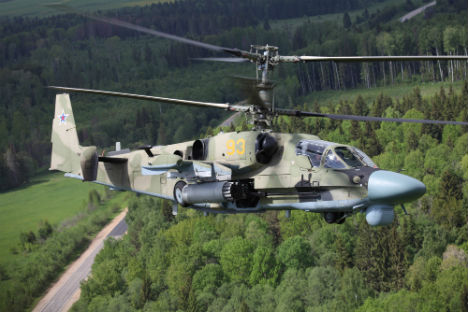 Russia’s helicopter engineering industry is set for a major upsurge with an ambitious plan to deliver 1,000 modernised fighting machines by 2020.

The rearmament of the Russian Armed Forces is acquiring a fresh momentum, with an infusion of more sophisticated machinery and equipment. Thus, military leaders have shifted their focus in recent years to helicopters, an eminently sensible decision. Let us look at the most recent efforts to renew the helicopter fleet, which will ultimately lead to 1,000 new vehicles that have been promised by 2020.

First off, we need to admit that the “rumors of the death” of our helicopters have been greatly exaggerated. The recent notorious tender for supplies of light helicopters, with technical requirements clearly targeting European machines, is considered “void” and terminated. The exact motives behind this decision by the Ministry of Defense are not clear, although it could have been a camouflaged move – when the tender was officially announced, the domestic light helicopter sector was incapable of mass production, to say the least. The Ministry of Defense may have used what was from the start a questionable and controversial tender to provide impetus to the domestic helicopter industry and hint that the country needs light air vehicles. But this is just a guess, albeit a logical one.

Currently, Russia has two new classes of modern light helicopters – the Ansat and the Ka-226 – and one more model, the Mi-34S1, will be coming very soon. All of these helicopters are fully modernised and more than capable of competing with foreign machines. Therefore, if we adopt the “conspiracy” point of view for the recent tender, then we should be expecting another one in the near future, this time for domestically-made helicopters. The outcomes of the future tender are already known – the contract will be awarded to a Russian maker. Trial operation of the Ansat-U helicopter has already started, which is another reason to buy domestically-produced aircraft. They believe this model could eventually replace the Mi-2 training helicopter. Many of the “teething problems” of the Ansat-U have been taken care of as a result of the trial flights at Sokol air base, but some still remain, including the power system – two Pratt & Whitney РW-207K turboshafts. The engines have no serious drawbacks – the only problem is their origin. Therefore, by 2015, it is planned to take measures to replace the imported engine with one designed and built domestically. The Ansat helicopters can then be operated without any problem by security agencies and even the defence ministry.

Last year saw some other notable procurement contracts besides the Ansat. The ministry has already received two of the 15 new Mi-26 helicopters it has contracted to buy. Tests of the new modification, the Mi-26T2, will soon be complete. The T2 is equipped with new digital avionics, which enables it to operate during daytime and at night and reduces the required crew to two pilots. The batch production of the refitted version of the Mi-26, the world’s largest heavy-lift helicopter, will start as soon as the current contract for 15 helicopters has been executed. One should also keep in mind the ongoing Indian tender for heavy transport helicopters – the Mi-26 is currently the only helicopter in the world that meets all of the customer’s requirements. The Mi-8 (and its deeply modernised version, the Mi-171) is still the most successful transport and multipurpose helicopter. The defence ministry has expanded the range of Mi-8 class machines by adding the Mi-8AMTSh (a.k.a. the Mi-171Sh) armed assault version, which is designed to transport troops and provide fire support. This helicopter has the potential to become a “flying infantry fighting vehicle”, the only difference from the Mi-24 versions being that it was originally a transport helicopter.

When it comes to attack helicopters, the Mi-28N and Ka-52 are the two most popular models. This year, it is planned to produce 12 Mi-28N helicopters and about 20 Ka-52 machines. All in all, the ministry has plans to procure about 100 Mi-28N machines by 2014, and within the next seven years, 140 Ka-52 helicopters will be delivered to the army.

The gradual increase in purchases of new machines, which is a direct result of increased funding, will soon make helicopter engineering the most rapidly growing segment of the Russian military equipment industry. In 2011, 265 helicopters were constructed in Russia; the target for 2012 is 300 machines, and by 2015, it is planned to produce more than 400 helicopters annually. Substantial progress has also been made in material supply and pilot training. Over the last few years the deficit of fuel and lubricants has finally subsided, and sufficient amounts of munitions have been supplied for target practice. Training of military personnel has been intensified. Take the air bases of Russia’s Southern Military District, for example. Thanks to priority supplies of new machines and equipment, and the availability of resources, their pilots for the first time in several years had more than 40 flying hours in 2011, including ten hours of night flights.

The current trends in the Russian helicopter industry suggest that the promised 1,000 new machines will be delivered to military customers by 2020. Some of the plans being made now may not be fulfilled for various reasons; however, the 1,000-helicopter target must be met and, possibly, exceeded.