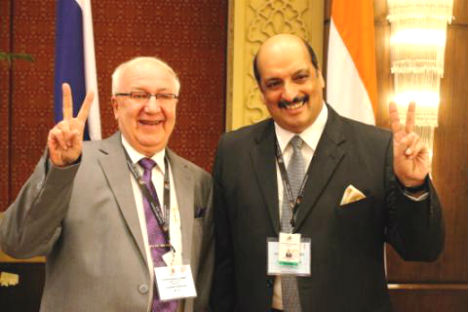 H.E. Mr Alexander Kadakin, Ambassador of Russia to India gave speech to celebrate the 65th anniversary of the establishment of diplomatic relations between India and Russia.

Sixty-five years ago, India and Russia established diplomatic relations, marking the beginning of a long journey of mutual discovery and blossoming of a deep-rooted friendship between the two countries. In New Delhi, the Russian embassy April 17 celebrated the 65th anniversary of the Russian-Indian diplomatic relations with panache in the midst of a galaxy of diplomats, political and social leaders and activists, captains of industry and business and cons of science and culture. It was an occasion laden with nostalgia, good will and warm feelings and it was all the more heartening to do so among friends who have embraced the cause of promoting and strengthening friendship and cooperation between our two peoples. This heart-felt cause has become entwined with the professional career and personal destiny of friends of India and Russia, a sure sign that the India-Russia friendship will scale new heights in the future.

It’s an appropriate occasion to reflect upon blessings that lead us to the historical step of establishing diplomatic relations between our countries in April 1947, even before India shook off the colonial yoke. One of those blessings was a deeply-ingrained sense of spiritual kinship, shared solidarity and a clear recognition of a win-win partnership. Russia and her sister, great India, have been gravitating towards each other since time immemorial. “India’s heart is reaching for the infinite Russia. The great Indian magnet is attracting Russian hearts", wrote ‘Maharishi’ Nicholas Roerich, the exalted Russian artist and philosopher who made India his second home.

That spiritual, cultural attraction of our nations forms the basis of deep understanding between us. Looking back at the path traversed, assessing the achievements and prospects, one feels certain that it was mutuality that has always defined Russian-Indian cooperation, our relationship. It may be likened to the roots of a magnificent banyan, that feeds three main pillars – mutual respect, mutual trust and mutual benefit.

Today we can proudly declare that the amity between Russia and India has long ago become a deep-rooted popular tradition in both countries. “An old friend is worth two new ones”, Russians are fond of saying. An ancient Indian wisdom goes: “Do not cut the thread of friendship; for if it has to be tied again, a knot will remain”. These are the reasons why the mantras “Hindi-rusi bhai-bhai” and “Russian-Indian relations have withstood the test of time", so familiar in political vocabulary, and have not frayed like antique Mughal coins. For us, diplomats, these phrases are like enchanting shlokas from the Bhagavad Gita, sacred and timeless, like miraculous formulae whose vitality and relevance are tangibly proven by the entire history and dynamics of Russian-Indian ties which have reached the level of special and privileged strategic partnership.

It is gratifying and inspiring that no domestic social and economic shocks or sweeping shifts in the international arena managed to shake the tradition of Russian-Indian friendship, to erode the national consensus that has grown up around it in both countries. Throughout decades our mutual ties, while acquiring new substance, have shaped themselves into a unique pattern of bilateral intergovernmental relations unparalleled in the diplomatic practice of the 20th or 21st centuries. One can hardly find another such example in global history!

Strong multidimensional cooperation with India has remained one of the top priorities of Russian foreign policy throughout all these 65 years. The continuity of such an approach was established during the early years of India’s industrialization when the USSR assisted in constructing its first-borns – steel giants in Bhilai and Bokaro, also the antibiotics factory in Rishikesh and the computer lab in Bangalore. It was further enhanced by joint implementation of dozens of other projects, including the launch of the first Indian satellite “Aryabhata” and the first space journey of India’s citizen – Rakesh Sharma. Continuity persists in our joint plans, be it design and manufacture of the unrivalled supersonic cruise missiles BrahMos, state-of-the-art fifth generation fighter jet, construction of the world’s safest units of NPP Kudankulam or preparation of the lunar expedition “Chandrayan-2”. Strong and multifaceted cooperation manifests itself in the arrival of the razor-edge “Chakra”, participation of Russian specialists in the Metro construction in Chennai or use the Russian GLONASS space system in India. There is no other country on earth that would so readily share the best it has with a friend, and it is an undeniable fact.

But it’s not a time to rest on past laurels. The potential of Russian-Indian trade, economic, scientific, technological and cultural cooperation is far from being tapped fully. There are plenty of opportunities for its substantial build-up and diversification. One must display more courage in breaking obsolete stereotypes, in searching and exploring new vistas and horizons. One must always search for investment projects actively engaging private business, for greater direct ties between Russian and Indian regions. The Consulate General in Mumbai and the local chamber of commerce and industry have come up with a very good initiative – on April 23 the first Russian-Indian Trading House was opened in India’s financial and economic capital Mumbai. It will aim to stimulate business between small and medium enterprises and companies of the two countries. It is a great gift on the 65th anniversary of Russian-Indian diplomatic relations.

In this context, it is appropriate to commend the art of diplomacy. It’s also fitting to remember and laud diplomats, who have made an invaluable contribution to shaping the principles, consolidating bilateral Russian-Indian interaction, which has become a mighty factor and an efficient tool in international politics. It is important to recall the 1971 Treaty of Peace, Friendship and Cooperation, the 1986 Declaration on Nuclear-free and Non-Violent World as well as the fundamental Delhi Declaration on Strategic Partnership of 2000, signed during my first ambassadorial tenure here. These documents created the precedents unheard of in the world diplomacy, set new principles of shaping international relations and effectively tackling modern challenges and threats. Accumulated experience helps us to fruitfully cooperate in multilateral formats, to work on creating a more balanced and just world order, as was amply shown during the BRICS summit last March and the recent foreign ministers’ meeting of Russia, India and China in Moscow.

This jubilee is a milestone event for me personally. If you have my experience, you willy-nilly believe in the magic of numbers so highly revered in India. This magic shows the obvious symbolic correlation between the two events – the establishment of Russian-Indian diplomatic relations 65 years ago and my birth in 1949, when the Constituent Assembly passed the Constitution of India! These dates seem to have illumined and blessed my journey. At the age of six I disappeared from home and was found asleep on a chair in the club of the neighbouring agriculture academy where Raj Kapur’s “Awara” screening had ended. Then, in high school, immortal works by Jawaharlal Nehru found their way to my desk. How precise was Khwaja Ahmad Abbas when he wrote that – had not Nehru been absorbed in politics, he would have been one of the most profound writers of the twentieth century. In my student days, 45 years ago, I began to familiarise myself with India and fell in love with her forever. Till now I consider her my karma bhoomi – the land of destiny, prem bhoomi – land of love, and maitri bhoomi – land of friendship. I was lucky to witness and participate in all major events in bilateral relations since 1971 – from Indira and Rajiv Gandhi to Atal Bihari Vajpayee and Manmohan Singh; from Leonid Brezhnev to Vladimir Putin. I am proud to have been entrusted with representing Russia here once again and I appreciate the opportunity to carry on the mission of so many of my Russian and Indian colleagues.

I have to confess – I like a lot of what epitomises India, first of all, her great people. And the country itself, as put in Kalidasa’s “Meghaduta” – from the Himalayan ranges and sacred cities on the banks of the holy Ganges to the magnificent palaces and forts of Rajasthan,  bustling streets and ancient temples of the South, from the exuberant vibrancy of colours in national dresses to the spices of traditional cuisine. In India I have many old, good, genuine and loyal friends whom I cherish.

Once I heard you weeping…

I have found you, my many Indias!

May I reveal one secret: the lawn in front of the hall in the Russian embassy harbours two towering cactaceous trees brought by me from the Roerichs’ Kullu Valley and planted here almost forty years ago. They have turned from small sprouts into strong trees branching intricately upwards, gazing at heavens above. In monsoon, at nights they blossom with flowers of transcending beauty, multiplying in number each year.

Let the friendship and strategic partnership between Russia and India grow, thrive and blossom! Let us, through the chakras of our souls, direct the mighty chariot of our cooperation into the future, with its wheels - chakras spinning eternally. One such Russian-made "Chakra" has been just inducted in the Indian Navy in Vishakhapatnam.

To modify a quote from my friend, prominent diplomat, politician and novelist Shashi Tharoor’s book "Great Indian Novel," the stories of the Russian-Indian amity “never end, they just continue somewhere else. In the hills and the plains, the hearths and hearts, of India” and Russia.

This article is an edited version of the speech given by Russian ambassador to India Alexander M. Kadakin at a function held in the Russian embassy in New Delhi April 17 to celebrate the 65th anniversary of the establishment of diplomatic relations between India and Russia.