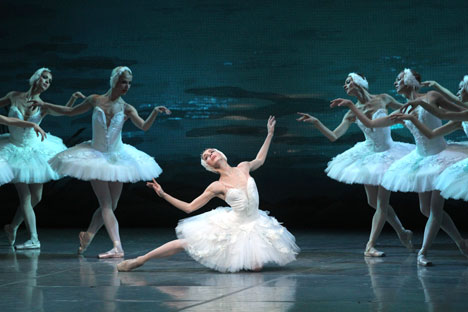 Swan Lake was first performed at the Bolshoi Theatre on 4 March 1877. Source: ITAR-TASS

Very few dance forms personify the elegance, grace and agility of Russian youth more than ballet and very few cities in India crave for world class performances in ballet more than Mumbai. Quenching the Indian megapolis’ thirst for ballet on a warm and humid mid-summer evening, the Gzhel Dance Theatre, one of Russia’s leading choreographic collectives staged a 2–hour performance bringing the music, colours and movements of Russian Ballet to life. The dance theatre, which takes its name from a small town in the Moscow Region, performed in the city as part of the on-going celebrations marking the 65th anniversary of diplomatic relations between Russia and India.

The jam-packed auditorium of the Russian Centre for Science and Culture in Mumbai witnessed a performance that included excerpts of Pyotr Tchaikovsky’s Swan Lake and Frederic Chopin’s Illusive Ball. Ballet lovers also got a glimpse of Tchaikovsky’s Capriccio Italien and Leon Minkus’ Don Quixote. The visual treats for the crowd included a series of beautiful ensembles, duets and solo performances by the theatre’s star artists such as Nina Koloskova, Dmitri Kirilin and Anastasia Ershova.

The night, however, belonged to Alexander Smolyaninov, who wowed the audience with a series of acrobatic and gravity-defying movements laced with finesse in renditions of Don Quixote. Smolyaninov, who is a graduate of the Gennady Ledyakh School of Classical Dance, has also performed with the Bolshoi and in 2009, was a laureate of the International Ballet Competition in Moscow.  Another highlight of the evening was the ‘California Poppy,’ a solo performance by Ekaterina Kondratieva, just before the curtain call. Kondratieva’s performance would have made Anna Pavlova, the great Russian ballerina of the late-19th and early-20th century, proud.

While classical ballet was the theme of the night, the Gzhel troupe is equally famous for folk and modern dance. Gzhel achieved national acclaim in Russia when it became the first ballet troupe in the country to perform all three forms in one concert.

The Gzhel Moscow National Academic Theatre of Dance is the brainchild of Russian choreographer Vladimir Zakharov, who was awarded the prestigious ‘People’s Artist of the Russian Federation’ award in 1992. Gzhel was formed to promote Russian ballet and culture and has performed in over 60 countries. The troupe was formed with “passion to show the spectators - through the means of dance and music - magic phenomena, traditions and customs of Russian folks' everyday life, her rich spiritual world, ingenuity and the creativity of Russian craftsmen and aesthetic feelings coming from the deep of the so-called Russian Soul,” Zakharov says in his website.

Gzhel’s high profile team of dancers and ballerinas include Ludmila Korkina, another recipient of the ‘People’s Artist of the Russian Federation’ award and over 15 dancers who have the title of ‘Honoured Artist of the Russian Federation.’ The troupe also has its own orchestra (which unfortunately did not tour India with the dancers) specialising in Russian folk instruments, led by vocalist Vladislav Tumanov.

Zakharov, who is also an academician, has had a chequered career. His first foray in choreography was with the Volzhsky National Russian Folk Choir in Samara in 1969. His passion for choreography even took him to what was then East Germany in 1975, where he spent 5 years as the Chief Choreographer of the Soviet Army Dance and Song Theatre in Dresden. Also among Zakharov’s achievements is the opening of a University of Dance, attached to the State Academy of Slavic Culture in Moscow. However, the choreographer dedicates most of his time to the Gzhel dance troupe.

The town of Gzhel, which is 52 kilometres south of Moscow, is one of the country’s hidden cultural gems, famous for its blue and white ceramic pottery. The town has been associated with pottery since the 14th century and its ceramics have often been compared with Dutch Delft. Gzhel was also famous for producing its own porcelain in Czarist Russia, a much-needed alternative to the expensive imported porcelain from China. The costumes worn by the troupe at the Mumbai concert were designed and created by the sewing workshops of the Bolshoi and the Stanislavsky-and-Nemirovich-Danchenko theatres and reflected the colours of Gzhel’s ceramics and handicrafts.

The Gzhel team staged two performances in Delhi before coming to Mumbai and Zakharov was full of praise for the Indian audiences. “I’ve always known that the Indian people have long been interested in ballet and it was an honour to perform in front of such knowledgeable audiences,” the choreographer said amidst loud cheers during the curtain call. Zakharov added that the troupe would be happy to perform again in the country, emphasising on “do vstrechi (till our next meeting)” instead of a “do svidaniye (goodbye).”

The festivities marking the anniversary of the Indo-Russian diplomatic relations will continue across the year in Mumbai. The Russian Ambassador to India, Alexander Kadakin will be in Mumbai on April 26 to inaugurate an exhibition of St Petersburg’s Hermitage Museum at the Russian cultural centre. The Russian mission will also inaugurate a business centre in India’s financial capital to promote private sector trade and investment between the countries.