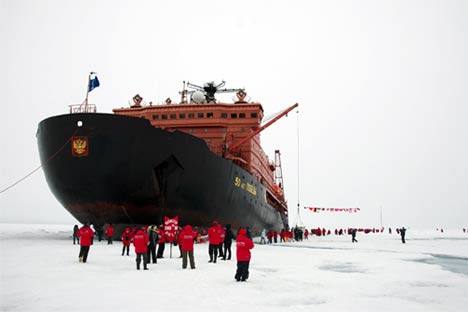 The Arctic region is expected to be the disputed territory between the world's powers. Source: Geo Photo

Global warming is making the polar regions of the Earth more accessible, and while the possibility of armed conflict is limited, all regional players are preparing for such a scenario.

The opening of the Arctic as a result of global warming only interested academics and journalists until recently. Now, however, it attracts the attention of politicians and military leaders.

The possibility of the revival of the Cold War in the Arctic is being increasingly discussed in both global and regional media. Meanwhile, the chiefs of the general staffs of the countries of the region have begun holding regular meetings on the issue of maintaining peace and security in the Arctic.

The latest meeting, which took place in Canada on April 12-13, was attended by military leaders of all Arctic powers, including Nikolai Makarov, chief of the Russian General Staff. The meeting took place against the backdrop of military revival in the region: Both NATO countries and Russia have conducted military exercises in the Arctic. The NATO Cold Response exercises, which took place in March, were held in the area between Sweden and Canada, with the participation of 16,300 troops. The exercises did not take place without incident: Five Norwegian soldiers were killed in a crash when a C-130J military transport plane crashed into the western slope of Mt. Kebnekaise in northern Sweden.

Russian soldiers have also conducted exercises. The 200th Motorized Rifle Brigade stationed near Murmansk has also performed military drills in the Arctic. Its T-80 tanks, which are the most adapted to Arctic conditions because their gas turbine engines are much easier to start in the cold than conventional diesel ones, were engaged in maneuvers. Ships of the northern fleet, airplanes and helicopters of the air force and naval planes all participated in maneuvers.

The air force also conducted separate maneuvers in the north of the country. The Ladoga 2012 exercise was held April 9-15 at the Besovets Air Force Base in Karelia and included the participation of more than 50 airplanes and helicopters. During the exercises, pilots shot down more than 150 aerial targets.

The Russian and NATO maneuvers are both in pursuit of one goal: With the growing accessibility of the region, all the key players want to demonstrate their capabilities and at the very least gain extra points through the kind of information-psychological confrontation that largely determines the outcome of today's diplomatic conflicts. Of course, no one wants an actual war, least of all the United States, which has most of its military forces tied up in another part of the world. But the active acquisition of polar resources, territorial disputes and the imminent expansion of navigation along the Northern Sea Route make the Arctic a very important region.

The atmosphere at major maritime crossroads has always been difficult: witness the Mediterranean, the Horn of Africa and the Strait of Malacca. If the Arctic becomes such a crossroads, and this seems very likely, then conflicts will quickly appear. How they will be resolved depends on the willingness of the parties to defend their interests.

Russia has expressed its readiness in both its military operations and its plans to expand its Arctic infrastructure. Twenty border posts will be built in the near future in order to protect and exercise some control over the polar domains. Some of these posts will be located next to the nine centers planned by the Emergencies Ministry and the Russian Ministry of Transport, which must be deployed according to the program for the development of the Northern Sea Route. The other frontier posts will be located on islands. Uninterrupted communication with the "mainland" will be provided through the Arctic satellite system, which is being deployed specifically for this purpose.

Frontier posts will act as the first layer of protection of Russian interests in the Arctic. If necessary, they can be supported by the Northern Fleet, a part of the air force and Arctic Brigades of the Ministry of Defense. Almost all of the countries of the region already have or are in the process of forming Arctic contingents that are adapted for operations in the region.

For the time being possible conflicts in the Arctic remain the subject of theoretical debates and of computer games – in particular the recently released game Naval Warfare - Arctic Circle, which conceives a war between Russia and NATO in the Arctic using naval and air forces.

Currently the world's leading players are too busy fighting the global economic crisis to make this story a reality. But the situation could change, faster than we think.