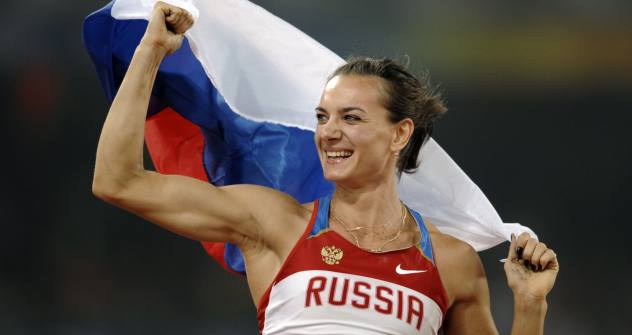 At the start of the year, many commentators predicted that the Russian pole vault champion Yelena Isinbaeva would retire because of a string of setbacks, notably injuries and poor form. But Isinbaeva has confounded her critics by recapturing her best form and, at the age of 29, she is not only determined to carry on with her career, but has set her sights on a new world record and winning another gold medal at this summer’s Olympic Games in London.

One of the most harrowing memories of Isinbaeva’s career was when she buried her face in her hands at the 2009 Berlin World Championships after her third failed vault. Her coach, Vitaly Petrov, who also trained the legendary pole vault world champion Sergei Bubka, was crestfallen, and her loyal fans were dismayed. But then came another  setback at the Doha Indoor World Championship in 2010 when she failed to win the gold medal.

Fans had become so used to her imperious form that a simple win without breaking a record was disappointing. Suddenly, she was failing to win competitions, let alone set new world records .

What went wrong? Everyone needs a rest from time to time, but it seems that Isinbaeva needed more than rest to return to form.

When she dismissed former coach Yevgeny Trofimov, with whom she had worked successfully since late 1997, after the Athens Olympics in 2004, it came as a shock. Trofimov had led her by the hand to the Olympic gold medal in Athens in 2004 and their relationship had flourished, bringing sporting glory.

Isinbaeva wanted to learn a new jumping technique under the guidance of new coach Petrov . She was of fered two talented foreign managers who committed her to lucrative contracts. She would take part in a competition one day and rush off to a remote part of China to fulfil key contractual duties the next, only to face another commercial tour a couple of days later.

Moving from her home in Volgograd to Monaco to be closer to the tournaments seemed to be a sensible thing to do. Here, she could train all year under an azure sky within a stone’s throw of her new house. But she missed her friends, sisters and parents, and none of the other Russian athletes were there to keep her company.

Was it realistic to hope that her coach Petrov could entirely replace her friends and family? She was not a recluse by nature, but she was spending far too much time alone in Monaco.

Under Petrov, Isinbaeva perfected the new jumping technique. She had set her first world record of 4.82m back in 2003; she took gold in Beijing in 2008 with a new world record mark of 5.05m.

But then came the setbacks. After Doha in 2010 she announced: “I have decided to take an indefinite break.” It seemed even Isinbaeva could not defy nature and her ageing muscles. She was spending more time on the treatment table and missed several tournaments. The new jumping technique was turning out to be a success and Petrov was making steady progress in improving her performance. But she was no longer threatening to break records and the bar was often knocked to the ground.

After going home to Volgograd in spring 2011, Isin- baeva decided she did not want to return to Monaco. She did not even want to train any more and was considering retirement. However, on Shrove Sunday (the Orthodox day of forgiveness) she telephoned Trofimov and asked him to meet her.

Related: Keshavan aims to shine at the Russian Winter Olympics

The trainer had by that time forgiven Isinbaeva for her decision to replace him and had been watching his former charge’s career with interest. They met in a small, deserted restaurant. Isinbaeva did most of the talking. She was crying: she had left her home in Monaco, and she wanted Trofimov to be her coach again. If he refused, she would retire from the sport she loved for good.

Trofimov realised that it would be wrong of him to let such a talented athlete end her career and said he would think about it.

On March 8, International Women’s Day, a popular holiday in Russia when women traditionally receive gifts, Isinbaeva was sitting at Trofimov’s dining table with her parents.Coach and athlete had been separated for five years, but the man who had turned her into a champion at a such an early age believed he knew what was missing and what could be done to help her rediscover her winning ways .

It seems that, like most people, Isinbaeva could not stand being away from her friends and loved ones for long. Once in 2007 when she was living abroad and seemed to be happy, I asked her about the rumours that she was going to take foreign citizenship; she took it as a serious insult. “Never, not even for 100 million greenbacks,” she snapped. If there is such a thing as a true patriot, then Isinbaeva is one.

Since her return to Russia, Isinbaeva has worked very hard and is starting to find her form.  Although she failed to win a medal at the World Championships in Daegu, South Korea last year, this year she set a new world indoor record of 5.01m in Stockholm and won gold at the World Championships in Istanbul. It was at Crystal Palace, London, in 2005, that Isinbaeva became the first female pole vaulter to clear 5m. But who knows if she will have as much success in London this year; she has had many injuries and disappointments. Some commentators in the Russian press have said she will take gold , but I’m not prepared to stick my neck out and predict that she’ll win in London.

Inevitably, many strong rivals have appeared in the past two years. One of them is Britain’s bright hope Holly Bleasdale who, at the age of just 20, can jump higher than the Russian could at the same age. Bleasdale recently smashed the British indoor record in Lyon with a clearance of 4.87m to become the second highest female pole vaulter in the world – after Isinbaeva .