Back to the Kremlin 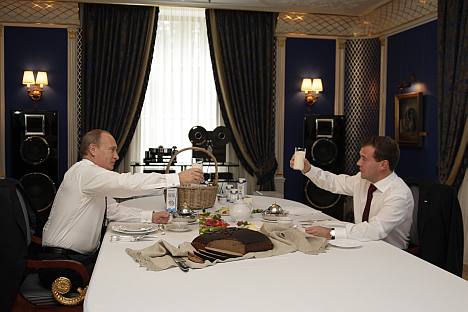 Vladimir Putin will become president of Russia on May 7. Russia Now takes a closer look at the ceremony and the privileges it will afford him.

On May 7, Vladimir Putin will once again become president of Russia after an hour-long inauguration ceremony. After having previously served two consecutive four-year terms of office, this time he will be installed for six years.

In spite of its rich history, modern Russia is still a young state. In the 20 years since its new political biography began, new political traditions have evolved.

Putin’s first inauguration ceremony was held on May 7, 2000, and subsequent inaugurations – his again in 2004 and Dmitry Medvedev’s in 2008 – have followed on the same date. Every president is given a fixed term under the constitution: even if the presidential election had gone to a second round, the inauguration ceremony for Russia’s head of state would still have taken place on May 7.

That date will remain unchanged in 2018, unless Putin leaves office before his term expires – as did Russia’s first president, Boris Yeltsin. In such a case, the inauguration clock hands would be moved and a new count started – in the hope that such an upheaval would not recur in the future.

The American word “inauguration”, which came to Russia under Boris Yeltsin, took some time to take root in Russia. It is a foreign-sounding word that was at first difficult to pronounce for Russians. So, when journalists covered the event in 1996, they preferred to say that Boris Yeltsin was assuming office and not that he was being inaugurated. They were afraid to get it wrong. Now, though, the term has become part of the Russian language and of Kremlin protocol.

Unlike in the United States, the president’s spouse does not stand next to the president during the ceremony, but looks on from the side; she is essentially surrendering him to the civil service. This is also the case for both speakers of the two houses of parliament and the Constitutional Court chairman. The First Lady’s husband becomes the head of state – and family automatically recedes into the background.

The nearly 2,000 guests at the ceremony – who include MPs, government ministers, presidential administrators, governors, cultural figures, political scientists, media representatives and diplomats – often feel a sneaking sense of sympathy for the person who is about to take the oath, because it can be rather lonely at the top.

The seating arrangements of the guests depend on their social and political status, with those lower down the hierarchy watching the events from a screen.

The ceremony takes place in and around three Kremlin halls. The would-be  president starts his path to the pinnacle of power by walking along the red carpet amid the breathtaking grandeur of the Grand Kremlin Palace.

First, he walks through the magnificent St George Hall. Commemorating Russian military glory, the St George Hall has seen emperors, heroes of the 1812 war, leaders of the Soviet Union and  participants in the 1945  Victory Parade. It is still  the place where government decorations and state prizes are awarded.

Several minutes later, the future president enters the St Alexander Hall, named in honour of the Order of St Alexander Nevsky founded in 1725 by Catherine the Great. After losing its magnificent interiors in the Thirties, when it was refurbished to house sessions of the Supreme Soviet of the USSR, this hall was restored to its former glory in the Nineties.

The next destination is the St Andrew Hall, the former throne room and main imperial hall in the Kremlin, where he is met by the head of the Constitutional Court, the master of ceremonies. From there, the main action begins.

In the short history of the inauguration ceremony, there has not been a single president of Russia who has not felt nervous covering that path. The inauguration of Dmitry Medvedev in 2008 was the first time the ceremony was attended by a former president – in this case Mr Putin – and his presence provided moral support for the new head of state.

Before that, both Boris Yeltsin and Vladimir Putin handed over power to themselves – either because they were elected for a second term or because they didn’t assume power from anyone else. Boris Yeltsin became Russia’s first president in 1991, and in 2000 Putin simply had the word “acting” removed from his title of acting president, after the resignation of Mr Yeltsin.

It now looks as if the presence of the former president,  who will even deliver a short speech, is likely to become a new tradition.

The actual inauguration takes place fairly quickly. The symbols of presidential power – the standard, the president’s official badge and a special copy of the constitution usually kept in the presidential library between inaugurations – await the future head of state. He recites a brief oath, vowing to serve his country, with his hand on the volume of the constitution and not the Bible, as is the case in some countries.

Within minutes, the country acquires a new head of state, who makes a short speech immediately after being sworn in. This is a set tradition. As a rule, the inaugural address reiterates what the president promised during his electoral campaign. When Vladimir Putin famously said: “The president in Russia is more than a president” in his first inauguration speech, it had a particularly symbolic ring in the St Andrew Hall, the former throne room.

When all the speeches have been made, the president makes the same journey back through the Kremlin’s three halls. A brief parade of the presidential regiment takes place while the new president prepares for the evening reception, where there are usually 1,000-1,200 guests.

With rare exceptions, heads of foreign states are invited neither to the ceremony nor the reception, as this is considered to be an internal Russian matter. Incidentally, history was made at the 2008 reception, when the presidential band performed Smoke on the Water specially for President Dmitry Medvedev, who is an ardent Deep Purple fan. Nothing like it had ever been heard at such events before.

Thereafter, the president moves into his new office, which is located in the former Kremlin Senate, a building commissioned by Catherine the Great and constructed from 1776-1787. (In his time, Lenin chose to have his office in Kremlin Building One and Stalin  followed suit.) This seat  of power has a fairly  ascetic look, a tradition  inherited from the Soviet leaders: wood-panelled walls, bookshelves, a huge table at which conferences are held and the president’s writing desk.

The presidential staff are located near their boss, as they refer to him behind his back. But their exact location depends on their post. Those who are very close to the president, including important aides and advisers and the presidential guards, sit in Building 14, connected to Building One by an underpass. However, Building 14 is currently under repair, so all the presidential advisors have moved to Staraya Ploshchad, the former headquarters of the Central Committee of the Communist Party, where lower-ranking members of the administration have their offices.

Contrary to a popular  misconception (which owes its existence either to analogy with the White House in the US or to the Stalin era when the party elite lived inside the Kremlin), the present Russian leaders only work in the Kremlin, and live several miles outside the Moscow city centre in the most prestigious neighbourhood.

Each of the three Russian presidents – Yeltsin, Putin and Medvedev – received their own residence. These properties, which are on the state balance sheet, need not be vacated after the expiry of a presidential term. This will save Mr Medvedev the undignified rush to move home that the outgoing British prime ministers have to face as they bundle their belongings out of 10 Downing Street – before their successor smugly usurps their living quarters.

Since Yeltsin’s death, his widow, Naina, has lived at the residence they were given when he was head of state. Likewise, when Dmitry Medvedev became president in 2008, Mr Putin stayed in his former mansion surrounded by pine trees at Novo-Ogaryovo; Mr Medvedev lives nearby in Gorky. These properties are not just residential houses but complexes equipped for work; they even have guest houses. The president spends a considerable part of his time working at home rather than in the Kremlin, and it is to this location that the new Russian president will repair on May 7, after his inauguration.

Along with all the presidential paraphernalia, which includes the standard, Air Force One and the nuclear suitcase, Putin will receive two more things: the presidential ID, which he is unlikely to ever have to use because there is not a single person in the country who does not know his face; and colossal responsibility for the important decisions he will have to take over his next six years in power.