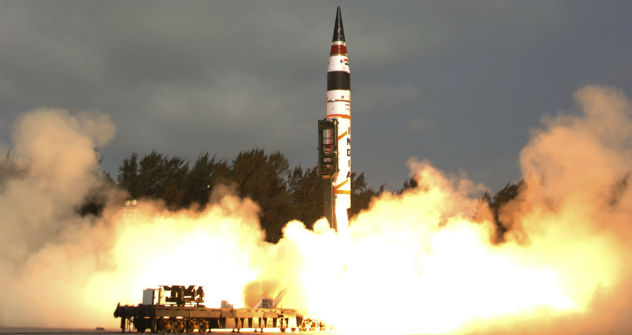 Agni-V is an intercontinental ballistic missile developed by the Defence Research and Development Organisation (DRDO) of India. On 19 April 2012 at 8.07 am, the Agni V was successfully test-fired by DRDO from Wheeler Island off the coast of Odisha. S

India’s strategic missile programme is stunted because the political leadership lacks the nerve to okay a true ICBM.

Now that the celebrations are over, it’s time for the hangover. Okay, let’s get this straight – India’s brand spanking new Agni-V is not an inter-continental ballistic missile (ICBM). I’m not making this up – by definition a true ICBM must have a range that’s over 5500 kilometre. India’s latest Agni falls well short of that mark. Definitions cannot be tweaked at the whim of politicians or flacks, which brings us to the ominous conclusion that India does not have an ICBM today and won’t have one in the near future.

I’m not suggesting that the Agni-V is a dud. The missile, in fact, plugs a big gap in India’s defence. But first chew on this: in 1971 China test fired the Dong Feng-5 missile that had a range of over 12,000. So 40 years after living under the shadow of the DF-5, India’s political leadership has finally greenlighted a missile that can hit China’s coastal areas – its economic and demographic heartland. Should we be thankful to New Delhi for a missile that is really an extended intermediate range ballistic missile (IRBM) that’s four decades late? Or should we ponder if our political elites have any grasp of strategy?

Going ballistic over a missile

India’s strategic community and the military have been clamouring for decades that to have bullet-proof security, India needs an ICBM that can reach every major country on the planet; that is, a missile with a range of at least 12,000 kilometre.

Now there are many people on the other side of the debate who question whether ICBMs are such a big deal. Their reasoning is that India’s furthest rival is China so there’s no need for a missile that travels further than that country. Plus, they argue, the US and Europe aren’t inimical to India so why provoke their ire by developing missiles that could potentially target these benign fellows?

Such thinking ignores a basic precept of defence – a nation must forever wage peace but keep its powder dry. ICBMs are strategic weapons and without a global-range missile, India will be unable to break out of its regional context. It’s as simple as that.

The ICBM is the doomsday weapon that separates the men from the boys in the global slugfest. While it is true that economic strength plays a key role in shaping international power equations, strategic missiles alone can guarantee fail-safe national security. As the Federation of American Scientists says, “Regardless of the origin of a conflict, a country may involve the entire world simply by threatening to spread the war with an ICBM.”

The supposedly horrendous cost of building and maintaining ICBMs is also touted as a reason why nations should avoid them. However, for decades China has strutted on the global stage on the strength of just 20 silo-based ICBMs. Today, of course, it has nuclear armed submarines and road mobile ICBMs, but those 20 venerable missiles have given it strategic parity with the US and Russia who both possess hundreds of missiles.

Clearly, strategic missiles are one reason (the other being the permanent seat at the UN Security Council) why regional chipmunks like France and Britain continue to talk big whereas Germany and Japan despite their massive economies remain fringe players. Without a credible ICBM force, India will be looked upon as nothing more than a subcontinental bully – a country that aspires to play hardball with the giants but ends up relegated to the minor league.

The problem with India’s missile development programme is that there is no clear strategic policy or urgency regarding deployment. India is the only country in the world that has developed a range of missiles but which remain either on the drawing board or have got stuck at the demo stage.

In the case of virtually every Agni series missile, after a couple of tests the Defence Research & Development Organisation (DRDO) declared that development was complete. The impression conveyed was the missile was ready to be handed over to the army. But then the DRDO went in for an improved version, for the cycle to begin all over again.

Missiles need to be tested dozens of times under all sorts of operational conditions to validate their performance and reliability. Take the Agni-IV, which failed its first test in December 2010. This missile was not tested again until November 15, 2011.

It’s as if the scientists are sent on a long holiday after each launch. This is not how von Braun or Sergei Korolyov worked to build strategic missiles for the US and Russia. This approach will not ensure the reliability of India's missile force, but it drives many Indians, well, ballistic.

Who knows, perhaps the scientists are indeed being sent on extended holidays. The chief reason why India’s ICBM development has proceeded at the speed of snails is intense American pressure. According to the Centre for Land Warfare Studies, New Delhi, in the late 1990s India had to postpone the Agni test flights on more than one occasion under US influence.

It is also well-known that back in 1992 the US had asked President Boris Yeltsin to stop the transfer of Russian cryogenic engines although the complex cryogenic technology is of little use in ballistic missiles.

There are two reasons why the US wants to scuttle India’s ICBM plans – one, America’s hopelessly inadequate (some say unworkable) missile defence systems will have the additional task of monitoring Indian ICBMs. Secondly, plain arrogance – a former Cold War opponent shouldn’t be allowed to develop missiles that could target good ole American folks. America has, therefore, drawn a red line that it will not tolerate India crossing, and that line is the 5000 kilometre mark.

It is in this backdrop that the Chinese, despite their usually shrill rhetoric, were right when last week they claimed that under NATO pressure India had limited the Agni’s range.

Under the sea, under-powered

The same goes for India's nuclear submarine under construction. The Arihant, which will be launched in a couple of years, will also be hampered by the 700 kilometre range of its submarine launched ballistic missile (SLBM).

By its very definition a nuclear-powered, nuclear-armed submarine must be undetectable and strike from unpredictable ranges. It could be lurking in the South Pacific, for instance, and yet be able to launch a missile at New York, London or Beijing, or all three at the same time. However, armed with a short range IRBM, the Arihant will have to get up close – and vulnerable – to the enemy to launch its missiles.

No other country in the world has developed such a short-range SLBM; if India has a new nuclear doctrine we’d like to know what it is. At any rate, after pouring in billions into the nuclear submarine programme, that’s very little bang for the buck.

So why is everyone calling it an ICBM? Two reasons: recently the spat with the army chief has exposed the Indian leaders as irresponsible wimps who have seriously hampered the army’s war fighting capacity. (Where else on the planet can you find an army with a million troops, but with ammunition barely enough for four days of fighting?)

So the political leadership is hoping the Agni-5 with an ‘ICBM’ tag will distract voters long enough so they forget how the same politicians have been eroding India’s combat readiness. MBAs couldn’t have done a better marketing job.

The second reason is that the majority of the Indian public doesn’t care about geopolitical matters. According to a survey conducted by the Delhi-based Centre for the Study of Developing Societies in 1999 – only one year after the Pokhran atomic tests – 53.5% of India's electorate had never even heard of the nuclear tests. Moreover, 35.6 percent of the respondents had never heard of China, India’s leading rival.

The last reason is that the media, whose job is to inform is itself misinformed. Barring a few exceptions, the Indian media is ignorant of defence matters. Many of the defence correspondents are chest-thumping stenographers of the government. Take this amateurish drivel from NDTV a day after the test: “Tipped to be a game changer, Agni-V will make the world fear India.”

If there’s some good news it is that missile development has an irresistible momentum of its own. The DRDO insists it won’t cap the missile programme, and is reportedly developing the 16,000 kilometre Surya ICBM, an anti-satellite missile, a reusable heavy lift rocket and a hypersonic aircraft among others.

Bharat Karnad, one of the authors of India’s 1999 draft nuclear doctrine, told Arms Control Today: “The technological momentum driving the Indian missile programme is going to take it well beyond the 5,000 kilometre range Agni-5 and into producing genuine ICBM category delivery systems, if only to match China.” And he added, “Longer range, more accurate missiles will be developed by India as a technological imperative.”

One can’t but detect a trace of desperation in Karnad’s statement. He and other members of India’s strategic community have long voiced such opinions in the hope that the Indian public will demand more urgency and accountability from the political leadership.