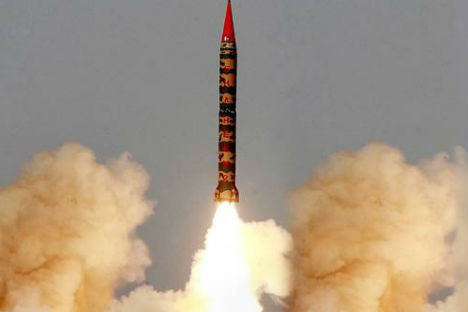 India’s triumphant launch of Agni-V* missile with 5000-kilometer range is hardly a week old and Pakistan announced on Wednesday that it also successfully launched an inter-mediate range ballistic missile into the Indian Ocean. Clearly, it’s a ‘tit-for-tat’.

It seems Pakistan’s Hatf IV Shaheen – 1A has been in the silos for a while already and ready to be showcased in the event of Indians stealing a march in display of missile technology. The announcement by the Pakistani military on Wednesday said, “The improved version of Shaheen – 1A will further consolidate and strengthen Pakistan’s deterrence capabilities.”

India of course will shrug it off as bravado by the little bother – just as China derided its Agni-V. India could say about Pakistan’s missile just about all the things China’s Global Times newspaper wrote, especially these lines: “Even if [India] has missiles that could reach most parts of China, that does not mean it will gain anything from being arrogant during disputes with China. India should be clear that China’s nuclear power is stronger and more reliable. For the foreseeable future, India would stand no chance in an overall arms race with China.”

Replace ‘India’ with ‘Pakistan’, and ‘China’ with ‘India’, and you get the equations more or less alright. Never mind that Agni-V has 5000 kilometers range (China says propagandistically India deliberately kept the range below the ICBM’s standard 9000-12000 kilometre range so as not to annoy the West), while Pakistan’s Hatf IV Shaheen-1 A would have probably only 3000 kms range. However, both are capable of carrying nuclear warheads. Thus, both India and Pakistan could legitimately claim they are developing credible minimum nuclear deterrence – India against China and Pakistan against India.

Of course, China won’t accept India’s aspirations of seeking ‘parity’ with it; nor will India accept Pakistan’s aspirations. If India had an official newspaper, it would have written exactly what Global Times wrote: “Even if [India] has missiles that could reach most parts of China, that does not mean it will gain anything from being arrogant.”

China has reacted that Agni-V is not going to come in the way of the development of cooperative ties with India. India’s attitude to the Pakistani launch is also going to be the same. External Affairs Minister S.M.Krishna struck an upbeat note in the Indian parliament on Wednesday when he positively assessed the outcome of the recent visit by the Pakistani President Asif Ali Zardari to New Delhi: “It was clear from the conversation that both countries consider the dialogue process and the improvement of bilateral relations as being in the mutual interest of the people of India and Pakistan.”

If India hopes that Agni-V would prompt Beijing to bilaterally discuss their missile development programs, it is not going to happen. China would not want to be ‘tied down’ by India. It estimates that its ‘peer group’ comprises just two other world class powers – United States and Russia – and would regard India as an imposter and a mere pretender. On the other hand, India too won’t like to be equated with Pakistan, which it regards as a ‘failing state’ that cannot claim to be a technological prowess of its own, and second, India too looks northward at China as its only true ‘equal’ in the contemporary Asian security scenario.

This 3-legged paradigm is different from the Soviet-American cold-war era paradigm. Simply put, the sort of ‘strategic balance’ that USSR and the United States negotiated is, therefore, not going to appear in South Asia – at least, for quite a while. What is within the realm of near-term possibility is a South Asian variant of ‘MAD’ – mutual assured destruction.

By the way, it is noteworthy that Krishna was speaking a day after Pakistan notified the Indian government its move to test its IRBM. (The two countries are obliged to notify each other of their missile launches in terms of a bilateral agreement.) Krishna obviously conveyed the impression that the dialogue process will proceed despite the missile launch by Pakistan. This is important because the last thing New Delhi would want is the international community reviving the talk about South Asia being a ‘nuclear flashpoint’ or raising dust about the impetuous behavior of the two South Asian rivals by stoking the fires of an arms race.

India is anticipating correctly that in immediate terms, there will be heightened attention on the part of the international community on the regional security scenario in South Asia. Indeed, a study produced by the International Physicians for the Prevention of Nuclear War, a Washington-based think tank, has just warned that a billion people around the world could starve to death if India and Pakistan were involved in a nuclear exchange, saying that even a ‘limited’ war could cause deadly major climate disruptions.

According to the study, corn production in the US would decline by 10 percent and soybean production by 10 percent. The report’s author Dr. Ira Helfand said, “It is not just the arsenals of the US and Russia that pose a threat to the whole world. Even these smaller arsenals [of India and Pakistan] pose an existential threat to our civilization, if not to our species.” These arguments are not new but the current context has new templates – international condemnation heaped on North Korea; situation around Iran; US’ disarmament agenda, etc. Woven into this new phase of western criticism is also the prognosis by the International Institute for Strategic Studies last month in London that arms spending by Asian nations will in 2012 for the first time overtake that of European countries, where the economic compulsions have prompted a slowdown.

Interestingly, despite the ‘unilateralist’ assumption by many Indian pundits that Washington is quietly elated by the launch of Agni-V as a step toward narrowing India’s ‘missile gap’ with China, this may not be the case. In its open reaction at least, the US state department has prime facie equated India and Pakistan. But it is also a nuanced statement. The state department spokesperson Victoria Nuland said in Washington on Wednesday:

"(We give) the same message that we gave at the time of the Indian test: that we urge all nuclear-capable states to exercise restraint regarding nuclear and missile capabilities. We understand that this [by Pakistan] was a planned launch. The Pakistanis have said it wasn't a direct response to the Indian test. But what's most important is that they do seem to have taken steps to inform the Indians, and we, as you know, are quite intent on those two countries continuing to work together and improve their dialogue."

Washington is evidently hard-pressed be neutral and not to annoy Islamabad unduly on yet another front while a delicate phase of negotiations is currently under way to ‘reset’ the US-Pakistan relationship, which is vital for the success of President Barack Obama’s Afghan strategy. There is also a touch of anxiety on the part of the US state department that the ‘tit-for-tat’ missile launches shouldn’t detract from the improving climate of India-Pakistan dialogue, which also is essentially a prerequisite for the advancement of the US’ regional strategy in Afghanistan and Central Asia. (By the way, Washington has resuscitated its ‘New Silk Road’ project as well as its projection of the Organization of Security and Cooperation in Europe as the main vehicle of regional cooperation in Central Asia.)

What is common between Agni-V and Hatf IV Shaheen 1 is that they both signal the growing nuclear capabilities of the two countries and bolster their nuclear punch. Paradoxically, however, they won’t trigger an arms race. Consider China and India. China is not likely to lose sleep over Agni-V. Last week’s launch is not even a surprise as its development has been an open secret for some time and China’s strategic planning would have most certainly factored it in. Again, the fact remains that while Agni-V bolsters India’s deterrence capability and although Indians may have a point in calling its enhanced missile capability a ‘game changer’ in respect for Sino-Indian relations, Beijing has no reason to feel that its own strategic deterrence suffered any erosion as such last week due to the Indian missile launch.

The point is the nuclear dynamic of the region is far too complicated to be viewed through the prism of the Sino-Indian relationship. This is evident from the fact that Indians pundits talk much more about China than their Chinese counterparts talk about India. Besides, China and India also subscribe to similar nuclear doctrines, which put the accent on ‘no-first-use’ and principally aim at achieving deterrence by means of developing a secure second-strike capability. China sees the main threat to its missile capability coming from the US, which is also developing a missile defence system (whose components are being deployed in the Asia-Pacific) aimed at stifling China’s capability to launch a counter-attack, even as the US is also developing long-range precision strike capabilities with conventional weapons that can cripple China’s nuclear forces and command and control systems.

Both China and India countries may be pursuing the same specific capabilities – modernization of missiles, development of operational sea-going submarine-launched capability, etc. To quote Jeffrey Lewis who heads the East Asia Non-Proliferation Program at the Center for Non-Proliferation Studies in California, “I doubt very much that China and India will engage in an arms race, scaled-down or otherwise. Both countries tend to pursue the same specific capabilities, but neither produces large numbers of nuclear weapons or nuclear-capable missiles.”

Lewis told the BBC that both China and India seem to be pursuing what he called a ‘possession’ oriented approach to nuclear modernization: “They are developing in turn small numbers of ever more advanced capabilities held by other powers. Neither country, however, has produced anywhere near the number of nuclear weapons or nuclear-capable missiles that each is capable of producing.”  While the US nuclear arsenal stood at some 2468 operational warheads in 2012 (source: The Bulletin of the Atomic Scientists), China is believed to have a stockpile of around 240 warheads, with an estimated 175 of them being ‘active’. As for India, it is believed to have around 100 nuclear warheads.

From the Indian viewpoint, its concerns are not only the lack of transparency in its discourses with China but also that China holds a lead over India in modernized armed forces. To be sure, India is catching up. Certainly, the deployment of China’s land, air and missile forces on the Tibetan Plateau worries India and it is a matter of time before China’s blue water naval forces make their presence felt in the Indian Ocean.

However, what is absent in the current discourses about the launch of Agni-V is that this development is highly likely to bring the western scanner to probe closely India’s missile development program as a whole in the coming period. Agni-V is in actuality a medium-ranged ballistic missile, which is a theatre weapon, although Indians have crowed that they have joined the elite ICBM club. Looking ahead, India may well work on developing a true ICBM that can reach North America, Europe and Australia. There is already speculation that India’s ‘super secret’ missile program titled ‘Surya’ would have a range in excess of 10000 kilometers. Also, India’s space program is adding to its capability. As a western commentator wryly pointed out recently, “a booster that can place a satellite in orbit can just as well deliver a nuclear warhead.”

Suffice to say, it is entirely conceivable that the time is approaching when the West may begin to regard a looming Indian missile challenge to it that goes way past a regional counter-balance to China. Meanwhile, New Delhi can draw comfort that Hatf IV Shaheen-1A becomes a convenient sideshow that somewhat helps to douse the fire that Agni-V might have created.

* Agni is a Sanskrit word for fire and is cognate with the Russian word ogon and with Latin ignis.