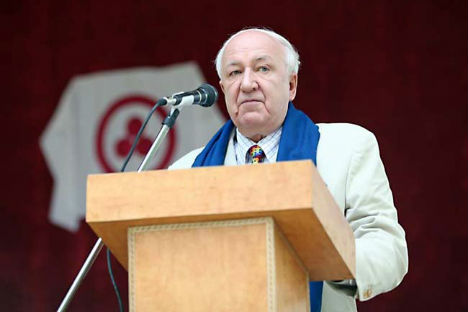 Russia has accused the Himachal Pradesh government of ‘behaving in a rude and uncivilised manner’ over the working of the trust that manages late Russian painter Nicholas Roerich's multi-crore-rupee estate in the picturesque Kullu Valley.

The Russian government last week asked the government of India to take over the International Roerich Memorial Trust (IRMT) and conduct the stocktaking of the museum's artefacts and property.

"The Embassy of the Russian Federation strongly rejects aggressive attempts to take over IRMT, undertaken by officials of the Himachal Pradesh government and representatives of the district administration. The second such attempt took place April 17, 2012," said an embassy statement.

It said the local authorities behaved in a rude and uncivilised manner and harassed Alena Adamkova, curator-cum-executive director of IRMT, completely ignoring her invaluable contribution to the development of the IRMT complex in Naggar, near here, in the past 10 years.

IRMT, comprising five Russians and 12 Indians, was founded on July 6, 1992, to manage the affairs of the estate and preserve the legacy of the painter.

The trust has Russian Ambassador to India Alexander M.Kadakin as a lifetime trustee and vice president, while Chief Minister Prem Kumar Dhumal is the ex-officio president.

Adamkova said on Monday that allegations of irregularities and mismanagement against her by state government functionaries, who are also trustees, were totally ‘unfounded’.

She accused the trust's life member Shakti Singh Chandel, a former Indian Administrative Service (IAS) officer settled in Shimla, of trying to remove her from the estate. On his complaint of financial mismanagement, the state government has ordered an inquiry.

Adamkova has been the trust employee since January 2002. However, her job contract was not renewed after it expired in December 2011.

"There is not even one rupee in my hand. Being treasurer of the trust, the deputy commissioner of Kullu solely manages all financial affairs. I am claiming reimbursement against bills after incurring expenses from my pocket. So, how can I indulge in financial irregularities?" she asked, adding that "even I have not been paid a salary since February".

Adamkova said no stocktaking or verification of the Roerich museum has been carried out since 1996.

"Despite the letters written by the Russian ambassador to India, no store stocktaking took place. Even no meeting of the trust was held for four years together, from 2004 to 2011. This is serious breach of the provisions of the trust act," she said.

The embassy, coming in the support of Adamkova, has asked the government of India to form a special commission, comprising representatives of the state administration and the central government in the board of trustees, as well as Russian experts and embassy officials, entrusted with the task of examining and taking stock of the museum's items and property.

"Considering the high value of the museum artefacts, this will ensure the integrity and preservation of the collection and will help avoid any possible or pre-conceived misunderstandings, claims or counter claims and inconsistent accusations. An appropriate document of transfer must be signed by the three parties before Adamkova leaves the premises and her post," it added.

The embassy said unfortunately no such steps have been taken and the local authorities are making "every effort to remove the Russian curator. Is it done intentionally?"

It underlined the international and civilizational character of the Roerichs' legacy - it does not belong to Naggar, or Kullu, or Himachal Pradesh, not even to India or Russia. It belongs to mankind and cannot be administered by a district or deputy commissioner, it said.

"This indisputable fact should be kept in mind while dealing with all matters pertaining to the IRMT," it added.

The Roerich estate is located in Naggar, 25 km from Kullu town, where Roerich came in 1927 from St. Petersburg and made the tiny village his home for more than 20 years.