Doctor Laughter from India wants to cheer Russia up 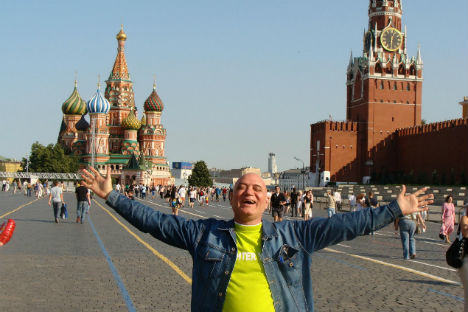 How Dr. Madan Kataria is helping serious-minded Russians release the laughter inside.

One day a doctor from Mumbai went down to the Moscow subway. The scene was a familiar one – miserable people, tired, unhappy faces, the daily grind of everyday life. But this doctor immediately stood out from the crowd – today he had decided to wear different-coloured boots. Dressed in this unusual attire he got into a carriage, then the doors closed and the train trundled off. The Indian doctor started to walk up and down the carriage pretending he was talking on the phone, his hand held up to his ear. Then he made it seem like the (pretend) person on the other end had said something uproariously funny, and he suddenly burst into helpless and infectious giggles. He laughed louder and louder! And by the time the train got to the next stop, the whole carriage was laughing along with him. This scenario could seem improbable, were it not for the fact that this man is a respected professional in his field – someone who is well up to the challenge of cheering up grumpy Moscow commuters.

This man was Doctor Madan Kataria – famous throughout the world as the founder of laughter yoga – now often known simply as “Doctor Laughter”. He has held courses and seminars in Russia several times now – and he has always been very warmly received. His training sessions start with him going straight up onto the stage, turning to face the audience, and then laughing. And for some mysterious reason the people in the audience also start to laugh, and by the end of his visit the room is positively flooded with happy energy.

Russia considers itself very lucky to have played host to Madan Kataria. As everyone knows, Russian people live in a country where the climate is harsh and the living conditions difficult. Russians are often thought to be quite a serious nation, and there is certainly a grain of truth in this stereotype. And what about the mysterious Russian soul? Well it’s just bursting with sadness! Madan has only been to Russia several times, but he didn’t just come here to hold training sessions, he wanted Russians to continue the tradition in their own country. And sure enough, laughter yoga classes, led by Russian instructors, have now started to spring up all around the country.

What is laughter yoga (or hasyayoga), and why is it so necessary in Russia? It all started with a prosaic (and also very comic) situation. One fine day in India in 1995 a small group of people gathered in the middle of a field and just started to laugh. Roars, giggles, squeals of laughter were all you could hear for miles around. Passers-by were curious – what was everyone laughing for, did someone say something funny? Tell us what they said! And the laughing group just answered – nothing, we’re just laughing for the sake of it!

The phrase “laughing for the sake of it” is key to our understanding of laughter yoga. After all, the world around us does not always invoke laughter, especially in a country as complex and difficult as Russia. Doctor Kataria recommends finding the trigger for laughter inside oneself, to laugh without any particular reason for doing so. And we can “just laugh for the sake of it” anywhere and everywhere – at home, on the street, in the office; on our own, with friends, with colleagues.

The most important thing is to get started. And then the body will laugh of its own accord, automatically. Madan Kataria has shown that what activates the laughter is completely irrelevant – it could be a joke that tickles us, or, failing that, we can simply force ourselves to laugh. All laughter is equally good for our health.

A lot of research has been carried out into this subject, and scientists have discovered that, in terms of health benefits, one minute of laughter could equate to 40 minutes of jogging. It is important to laugh as hard as you can for at least 15 minutes. Strong laughter, just like physical exercise, increases our respiration rate, speeds up our heart rate, stimulates various groups of organs within the body and pumps the cells full of oxygen. As a result more endorphins are released into the bloodstream, and this is a great way to relieve stress. Every laughter “session” starts with everyone there taking deep breaths, and as they are breathing out they are told to make the noises “Ho ho”, “ha ha”, and after this everyone starts laughing spontaneously. Laughter yoga doesn’t require any particular physical training, so anyone is free to sign up.

Madan thinks that people in Russia don’t laugh enough and have a tendency to melancholy. On top of this, people everywhere are having to deal with more and more stress in their daily lives. This is why Kataria’s laughter clubs have been met with such enthusiasm all over the world. At present there are more than 16 thousand centres for laughter yoga, spread across more than 50 countries across the world.

A huge number of people benefit from this therapy; it lifts their mood and increases their sense of well-being. Laughter diffuses tension in the body, kick-starts positive emotions and releases our inner creativity, it helps us to be open and happy in the way we relate to those around us.

Today this cheery sport has a growing fan-base that includes A-list celebrities such as Will Smith, George Clooney and Julia Roberts. In Russia, where yoga has long been one of the most popular ways of keeping fit, hasyayoga is also attracting a following. In the USA laughter yoga is used as a therapy in hospices, psychiatric clinics, old people’s homes and even in prisons. In India some schools start and finish their daily routine with a “five minutes of laughter”. In Russia laughter yoga is only just starting to catch on, but who knows – maybe several years down the line all the offices and schools in Russia may start their days with a designated group laughter session...