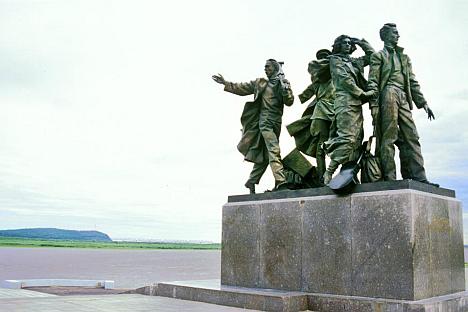 Founded in 1932, Komsomolsk-on-Amur is one of those towns whose very existence begs the question: Why is it here at all? Located on a wind-swept, marshy basin of the Amur River, Komsomolsk suggests comparison with another city in an inhospitable environment, St. Petersburg, founded on a marsh at the mouth of the Neva River. At least Petersburg had the advantage of proximity to the European cultures. Komsomolsk seems distant from everything, and therein lies a partial answer to the question.

In 1930, the Soviet government and its Central Executive Committee declared the development of the Far East territory a state priority. Soviet control over this vast, sparsely inhabited region seemed tenuous. For example, the large Amur River basin had been absorbed into the Russian Empire only in the 1850s as the result of treaties negotiated with the Qing Dynasty and ratified by the Convention of Peking in 1860.

By the turn of the 20th century, the Trans-Siberian Railway had spurred rapid development in new eastern settlements such as Khabarovsk and Vladivostok, but these towns remained vulnerably close to international borders. During the Russian civil war, the Siberian railroad allowed marauding White and Red forces to wreak havoc on settlements and infrastructure in the Far East until late 1922. At the same time, much of the territory was also occupied by foreign troops, particularly the Japanese. For part of the 1920s, Chinese forces also posed a potential threat.

These challenges were undoubtedly fresh in the memory of Moscow’s decision makers in the late 1920s. In view of the tense geopolitical situation in Asia, their goal was to create a new, reasonably secure industrial anchor for Soviet presence in the Far East. In January 1932, a state commission headed by prominent Communist activist Yakov Gamarnik (1894-1937) found a location on the left bank of the lower Amur River at the small Russian village of Permskoye. Nearby was the Dzyomgi camp, inhabited by the indigenous Nanai people. The river’s width at this point was suitable for the creation of a shipyard, a development priority set forth as early as 1931. While the Amur River provided a major transportation route, the new site was also buffered by some 250 miles from the regional center of Khabarovsk, located on the Manchurian border at the confluence of the Amur and Ussuri Rivers. Remoteness was a strategic advantage for the planned industrial center.

In February 1932, the site was accepted by the Soviet government, which also confirmed construction of an aviation plant at Dzyomgi. That was fine on paper, but a critical problem remained: lack of a qualified work force. That spring, a national call went out to the Komsomol (Communist Union of Youth) network, and by April over 6,000 volunteers arrived in Khabarovsk. The first group landed at Permskoye in May 1932.

It is almost impossible to imagine the difficulties that confronted these young people, motivated by an exalted idealism bordering on the fanatic. The backbreaking work of clearing and draining the marshy ground, which was swarming with mosquitoes and other insects, was done with the most primitive tools. Housing was in army tents and dugouts, with a few wooden barracks. Floods damaged much of the work due to improper surveying. Inadequate food, clothing and medical care brought new crises in the fall. The appearance of typhus and scurvy led to a near panic, which was temporarily relieved when local Nanai tribes provided fresh reindeer meat. The onset of winter and the freezing of the river compounded problems of medical care. Truck routes made their way over the Amur ice with extreme difficulties.

And yet the town, officially designated as Komsomolsk in December 1932, held on. Wooden barracks were built, a sawmill went into operation in 1933, and in June the foundations of the shipyard were set. In January 1934, a new group of several hundred construction workers made its way in an “ice march” up the frozen Amur River to the site. In September, another wave of Komsomol volunteers arrived. In May 1935, the first temporary dock was completed and construction began on the aviation plant.

At the same time, Moscow approved plans for a steel plant. In 1935, construction began on a 225-mile-long rail link to the Siberian mainline. It was completed at an extraordinary pace in 1936 And in 1938, design work began on a petroleum refinery, as more groups of workers arrived. Yet the population remained overwhelmingly male. The issue was addressed with still another campaign. In 1937, national publicity was given to a letter by communist activist Valentina Khetagurova (1914-1992), who called for women volunteers to join her in the development of the Far East. Thousands, mostly Komsomol members, responded. Komsomolsk received its first group of 700 young women (“Khetagurovki”) at the end of 1937.

For all of the youthful commitment, however, there was another side to the development of Komsomolsk and the Far East — the use of forced labor from the concentration camp system. Soviet-era publications were silent about the role of gulag inmates, who also suffered from scurvy and typhus, and much else. Belated acknowledgment is now given to the thousands of prisoners of Amurstroi, part of the notorious Dalstroi network, which rapidly expanded with the intensification of Stalinist terror in the late 1930s. Komsomolsk thus represents a characteristic mixture of idealistic appeals with brutal repression and appalling violence. It is telling that Yakov Gamarnik, who had done so much for the development of the Far East and Komsomolsk, committed suicide in May 1937 rather than face inevitable arrest as an early associate of Leon Trotsky.

When buildings more substantial than wooden barracks were finally erected in Komsomolsk toward the end of the 1930s, they resembled the austere, streamlined forms of Soviet 1920s modernist architecture. Building design was usually assigned to Leningrad architects, who for much of the Soviet period were given preference for projects in the northern part of the Soviet Union.

World War II froze all substantial construction, and the new factories of Komsomolsk were devoted entirely to intensive production for military purposes. After the war, Komsomolsk was rewarded for its defense labor with a series of grandiose architectural ensembles in the style of St. Petersburg neoclassicism. To this day, the city has uniquely preserved much of the architectural ambiance associated with the Stalinist and subsequent Soviet periods. Soviet culture is also reflected in the city’s extensive monumental art and sculpture. Yet Komsomolsk also has a new Orthodox cathedral, something that the original planners certainly never envisioned.

Since the collapse of the Soviet Union in 1991, the city’s industrial combines have undergone extensive restructuring to meet new economic realities. The shipyard no longer builds submarines, but survives on more modest orders. The petroleum refinery — supplied with Sakhalin oil – continues to work at a high level. The steel plant also continues to produce in the area of heavy machinery.

The industrial mainstay is the Komsomolsk-on-Amur Aircraft Production Association, now the largest such enterprise in Russia. Its Sukhoi jets are highly competitive in the lucrative international arms market, which shows every sign of expanding. The firm is also developing a mid-level passenger jet, whose commercial potential is still unclear.

With economic restructuring, the population of Komsomolsk has declined substantially, from a high of 315,000 in 1989 to a current estimate of 260,000. Yet the city continues to play a major role in the economic and cultural life of the Russian Far East. Its pleasant appearance has stimulated efforts to preserve its ordered, neoclassical architecture, a reflection of a complex and often difficult Soviet past.