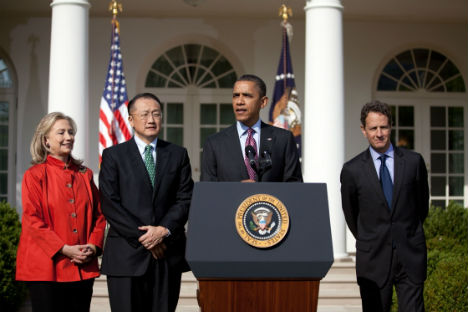 Jim Yong Kim was chosen to head the World Bank being supported by US and Europe. Meanwhile this appointment became a struggle between "spheres of influence" - an expert believes

Jim Yong Kim, president of Dartmouth College and a former top official in the World Health Organization who is perhaps best known for treating HIV/AIDS and tuberculosis in the developing world, was chosen last week to head the World Bank. Kim replaces Robert Zoellick, former deputy secretary of state in the George W. Bush administration, who is stepping down after a five-year term.

With the United States, Japan and most European countries supporting his candidacy from the start, there was never any doubt regarding the outcome of the voting by the World Bank's board of directors. But the voices of those who supported alternative candidates — Nigerian Finance Minister Ngozi Okonjo-Iweala and former Colombian Finance Minister Jose Antonio Ocampo — gained a greater audience than on previous occasions. This time, BRICS member states had hoped to form a coalition to break Washington's monopoly on naming World Bank directors.

They were unsuccessful in forming a coalition, in part because Russia ended up supporting Kim's candidacy. But it is both natural and positive that the coalition failed. The very fact that certain countries viewed the appointment of the World Bank director as a struggle between "spheres of influence" and wanted to form coalitions to promote their own candidates is itself an indication that those countries belong to the so-called Third World. Such countries are typically wealthy enough to forego World Bank aid themselves but not rich enough to provide significant assistance to others.

Both of Kim's rivals were highly qualified ministers who served under very difficult circumstances. As individuals, perhaps no single candidate outshone the others, and all three have very impressive track records. But looking at the broader question and asking which country's representative should head an international organization devoted to fighting poverty, then the answer is obvious. It should be a country that expends large sums in public and private funds on large-scale research into eradicating poverty. It should be a country for which the battle against poverty is not just a political football — as it could be in any country — but the object of serious scholarly and scientific study. By these criteria, it turns out that the head of the World Bank could only hail from either the United States or Britain, the two countries where all of the university programs and research centers devoted to fighting poverty are located. Even the best-known critics of World Bank programs — Joseph Stiglitz and William Easterly — are professors at U.S. universities.

A large percentage of the world's poorest people live in China and India, making the World Bank of greater importance to those countries than to Russia. At the same time, however, if those countries are so concerned about poverty that they take an active interest in who heads the World Bank, why don't they fight poverty directly at home? They can implement whatever domestic poverty-fighting measures they deem best. What's more, if either China or India succeeds in eliminating poverty on the home front, their candidate to head the World Bank will be approved unanimously and won't need a political coalition backing them. Personally, I have no doubt that is exactly what will happen one day.