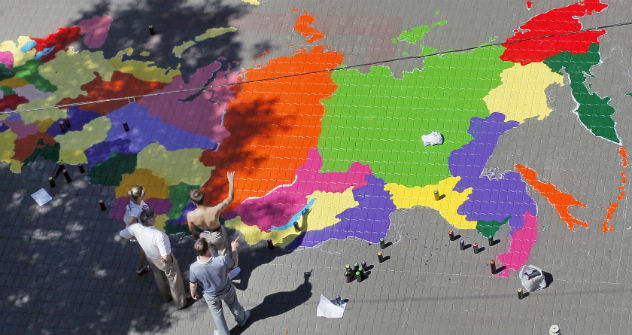 The regions and their relations with the federal center are of primary importance for Russia, the biggest country and a federation with the largest number of jurisdictions in the world.

Journalists sought to capture the cultural, historical and socio-economic diversity of the Soviet Union by describing it as extending “from Finland to Afghanistan.” Now the country does not include the Baltic Republics or Central Asia, but the contrasts between Karelia and Kalmykia or Tuva in present-day Russia are still striking.

The natural and socio-cultural diversity of Russia’s 83 regions is so enormous that effective administration from the federal center is impossible. There are no universal solutions that will work equally well for Chechnya and Chukotka, Kaliningrad and Kamchatka.

Meanwhile, centralization and “unitarization” have been taking place steadily since the year 2000. In a natural progression, the federal-regional pendulum, which swung too far toward the regions in the 1990s, would inevitably return to a more balanced position.

However, it seems that Russia has already passed the peak of centralism and “unitarism,” and the pendulum has been swinging backward since mid-2011. It is extremely important for Russia not to repeat the mistakes of the 1990s and to reduce the amplitude of the pendulum swing to avoid hitting the extremes on both sides.

Vladimir Putin’s first major project, announced the day after his initial inauguration, was federal reform. Anti-federalist in nature, the reform was aimed at creating a new venue—under Putin’s complete control—for greater supervision over the main elements of the state machine, both at the regional and federal levels. It is no accident that military generals were appointed as the first envoys to the seven federal districts established in 2000 (the South Caucasus Federal District, formerly part of the South Federal District, was later added as a separate entity). In the regions, Putin’s new vertical power structure rested on chief federal inspectors. Their main function was to coordinate the activities of all regional federal agency offices except the Federal Security Agency (FSB). The envoys received a status akin to deputy prime ministers and were included in the Security Council.

The president charged his envoys with a growing number of specific tasks. At one time, they had to tailor regional legislation to the federal legislation, select candidates for the position of governor and others, support small and medium businesses, elaborate development strategies and even prepare the regions for winter.

The transition from functions of overseeing regional officials and ensuring compliance with the decisions made at the top to elaborating and implementing economic development strategies was reflected, among other things, in the replacement of generals as envoys with successful managers from among the ranks of governors and mayors. During the 12 years of their existence the federal districts have become part and parcel of Putin’s system—a new floor between the regional and federal levels. There is no reason to expect the system to be dismantled; it will most likely be adjusted to meet new challenges as they arise.

The ratio of federal officials to regional ones in the regions is two to one. The employees of numerous federal departments in territorial divisions (numbering about 60 to 70 per region) and their counterparts from the financial departments of the regional administrations are on the federal payroll.

Although formally, the entire army of federal officials in the regions is subordinate to the relevant federal ministries and departments, in reality all of them, including the executives, have long since become part of the regional establishment controlled by the governors. By the beginning of 2000, when Putin became president, there was only one federal agency—the FSB—that had not fallen under full or partial control of the regional political elite. In light of this, Putin chose acting presidential envoys from among regional FSB executives.

The main reason these executives were loyal to Moscow was the system of horizontal rotation. The purpose of the system was to prevent executives from remaining in the same region for too long, for fear that they would become too involved with the locals and lose loyalty to the central government. These executives were supposed to be rotated from one region to another every four to five years.

The transformation of the regional elite is largely determined by the conversion of the regions from closed into open systems in the 2000s. The elites also became more mobile—both between the regions and Moscow (in both directions).

The horizontal rotation of federal generals in the regions has one major drawback. The vertical hierarchies of different departments lack coordination and fire regional bosses from time to time. Such replacements enhance loyalty at the regional level, but usually at the expense of efficiency. However, when several regional generals are replaced in one go and new arrivals have no solid knowledge of the region they were sent to, the effect may be the opposite—instead of enhancing its control over the region, the center loses it completely.

Power to the locals

There is no alternative to federalism if Russia wants to preserve its territorial integrity without sliding into authoritarian rule. Some aspects of federalism must be restored, and others created from scratch.

The first thing to do is to considerably redistribute functions between different levels of government on the basis of the “subsidiarity” principle, i.e. delegating functions from top to bottom and then executing each function at the lowest level, closest to the people as the source of power. It is also possible to use the principle of competitive federalism with some overlap among zones of responsibility at various levels, which gives people additional room for maneuver. This primarily applies to the subjects of joint administration as defined by the Constitution.

Consistent de-federalization in the last few years has significantly evened out the statuses of the regions, minimizing the differences between ethnic republics and Russian regions. This makes it possible to renounce ethnic federalism with its sophisticated hierarchy of ethnic groups introduced by Stalin, and to build a normal federation of regions in the future. Ideally, the asymmetry in the statuses of regions should be reduced to two types—fully-fledged regions of the federation that are capable of performing all functions independently, and federal territories that receive considerable financial aid from the center, thereby delegating part of their rights to the top.

It is not quite clear what to do about federal districts, although it is probably possible to create a structure whereby a large portion of territorial outposts of federal bodies will be transferred to the district level, whereas the regional authorities will remain in the regions for the most part. The territorial networks used by federal bodies, including administrative courts, should be divorced from the regional networks as much as possible in order to unite both whole regions and their parts. The disparity between the borders of different territorial administrative networks facilitates the cohesion of the country and removes the dictate of regional borders.

The conversion of the Federation Council into a body representing regional interests could be achieved in different ways. It is hardly sensible to restore direct elections of senators, which was the norm in 1993 to 1995 when the party system had not yet taken shape. It is possible to adopt a version of the German model, whereby the regions are entitled to send different specialists to the meetings of the upper chamber as their representatives depending on the problems discussed. It is also possible to endow the biggest regions, which carry the brunt of the financial burden in implementing the chamber’s decisions, with more influence in the decision-making process. They could be given additional votes for this purpose.

It is essential to return overall authority to the local government by providing it with the necessary tax base for financial self-sufficiency. This applies to both capitals where the municipal level is subordinate to the regional one. It is necessary to do everything to develop elements of direct democracy, such as gatherings and local referendums and to encourage initiatives on self-taxation for resolving local issues by allocating additional federal funds to the collected revenues.

The implementation of these proposals is not easy for several reasons: the redistribution of powers between government levels cannot go smoothly, and the country may face unexpected problems. Moreover, some federal officials believe that giving more power to the regions may put the country’s territorial integrity at risk. These apprehensions are justified to some extent, but the ineffective and clumsy actions of the center pose a much bigger threat.

Nikolay Petrov is the chair of the Carnegie Moscow Center’s Society and Regions Program.