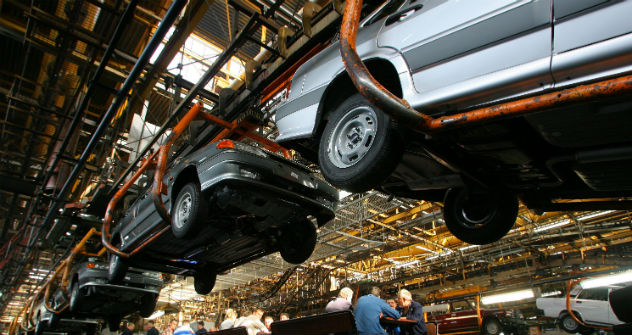 AvtoVAZ is currently updating its range of models and modernizing its production facilities, which could inject more competition into the market. Source: ITAR-TASS

Global production of cars in 2012 is expected to grow by around 7% against 2011. This is largely due to the continuing demand seen in China and India, the recovery of the US market, and increased worldwide demand for premium brands, according to experts at PwC in an updated review of the global and Russian automobile markets. The economic hardships faced by the EU will likely cause a drop in production of light vehicles in 2012 across the region. The lingering uncertainty over the debt crisis and the impact of austerity measures could hold back market growth, they say.

In Q1 2012, sales of new light vehicles grew by 21% in quantitative terms and 51% in monetary terms against Q1 2011. The positive dynamics are related to factors such as increased consumer confidence and the stronger rouble, notes the report.

Sales of Russian brands saw a slight fall, primarily due to the completion of the government's scrappage scheme in 2011. AvtoVAZ is currently updating its range of models and modernizing its production facilities, which could inject more competition into the market. Active growth in Russia’s domestic production of foreign brands caused sales to rise by 56% in quantitative terms and 89% in monetary terms, reads the PwC report.

"Output has increased mainly due to increased production of foreign brands. 10 out of the top 12 global car manufacturers have assembly plants in Russia. Production of traditional Russian brands has seen a slight decline, but this is due to the ongoing restructuring and modernization of production at AvtoVAZ," states the expert report.

The car market underwent a period of resurgence in 2010 and 2011. A government-led stimulus helped achieve a substantial increase in sales. PwC’s analysts say that despite the overall positive trend in the market, quarterly sales in 2011 failed to reach pre-crisis figures.

The end of the scrappage scheme and the dissipation of the low base effect are leading to a predictable slowdown in the car market, highlighted in particular by the results of the past three quarters.

Potential growth in the premium segment

It is striking that in 2011 demand for cars costing more than $100,000 grew 2.2-fold in comparison with 2010. In view of current consumer preferences, PwC expects to see increased demand for premium-segment vehicles.

Development forecast for the light vehicles market in Russia for 2012

Russian brands: under the scrappage scheme, 300,000 vehicles per year were sold in 2010-2011. However, the scheme has come to an end, and this is likely to dent the share of Russian brands in total sales for 2012.

The PwC report also states that imports of second-hand foreign brands currently make up a minor share of the market and do not play a significant role, but potential changes in the tariff structure could have an impact. Imports of foreign brands rose considerably in 2011. 2012 has so far seen insignificant growth and lower imports of new foreign brands, in line with the currency exchange rates. Expert opinion holds that sales of Russian-made foreign brands could grow by up to 11% in 2012.

Growth in consumer demand, government incentives, and investments by car manufacturers in new facilities have all contributed to higher output of light vehicles.

In 2011, 44% more light vehicles were produced than in 2010. More than 1 million of the 1.7 million cars manufactured in Russia were foreign brands.

“We expect this trend to hold firm, and according to our forecasts by 2018 foreign brands will be the main source of production growth. In 2011, 68% of cars sold in Russia were assembled in Russia. We believe that share could rise by 2018," predicts PwC.

Expert analysis points to the BRIC countries as the main factor behind growth in global car production. Europe continues to face economic difficulties, causing output of light vehicles to drop. In Russia, meanwhile, car production is on the up, largely due to foreign brands. In Q1 2012, growth was 18.6%.

"2011 showed steady growth in car sales in Russia, in both quantitative and monetary terms. However, the industry is still short of the pre-crisis levels of 2008," reads the report.

The positive dynamics continued into Q1 2012 — total sales of light vehicles increased by 21%. The experts forecast a slight slowdown in growth and believe that in 2012 sales of new light vehicles (excluding light commercial vehicles) will be around the 2.6 million mark.

"Economic and currency instability makes the Russian market unpredictable in the short term. In the current economic climate, the car market can count on long-term growth, but should nevertheless be ready to react quickly to possible changes," concludes the report.