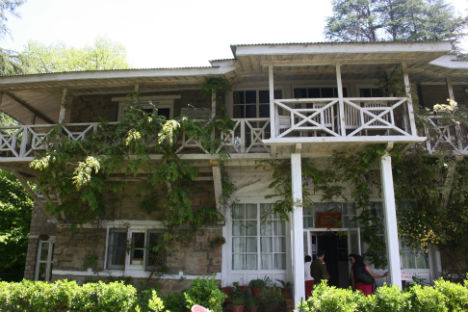 65 years after Nicholas Roerich’s death, his work and legacy continue to play an important role in bringing together the people of Russia and India.

“I always repeat that if you want to see a beautiful spot, ask the inhabitants of a town to point out the most ancient site,” Nicholas Roerich wrote in his book titled Altai-Himalaya. “These people of times immemorial knew how to select the most beautiful places.” The words of the Russian painter, writer and philosopher ring true in this village by the River Beas in the Kullu Valley, where an ancient Krishna temple occupies the most scenic hill top, but Roerich’s penchant for beauty helped him select another scenic area to build an estate, which the writer called home from the late-1920s.

His two-floor house is now a small museum with a collection of over 40 original paintings. Roerich painted most of the masterpieces on display during his famous expedition from the Himalayas through Altai to Mongolia and Tibet. It is hard not to be awestruck by the lights and colours of the mighty Himalayas and Karakorum ranges that have been captured by Roerich in the ‘Study of Mountains’ series of paintings in the gallery.

There are also rare paintings of the Kullu Valley and the landscape of the area that the Roerichs made their home. After Naggar was chosen as the spot to build the ‘Urusvati Himalayan Research Institute,’ the great artist’s son George said, “In this far valley of Kullu blend keen mountain air and warm southern sun. Here, too, wonderfully blend races, languages, religions, arts and the natural phenomena of many diverse climes, to create anew a veritable paradise alike for the scientist who looks only to the present and for him, who reckons man’s and Nature’s story in thousand-year units.” 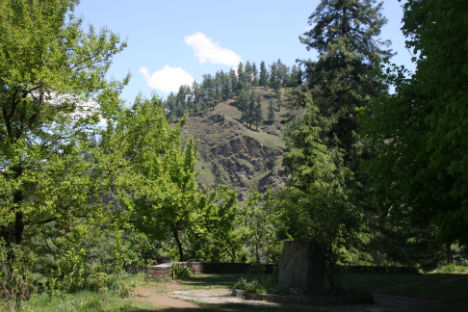 The upper floor of the house preserves the private rooms of Nicholas and Helena Roerich. While the house looks a small Himalayan chalet from the outside, the fragile structure is nothing more than a Russian dacha (summer cottage) transplanted to the Himalayas. There is even a peculiar and pleasant smell in the house, one that is indistinguishable from that of the interiors of a Russian dacha. The studies of both Nicholas and Helena Roerich are well-preserved. The rooms have a stunning view of snow-capped Himalayan peaks, which inspired the family for decades.

The estate also has samadhis (memorial and final resting place) to Nicholas Roerich and his son Svetoslav, who was also a great artist and lived in India until his death in 1993.  The path to Nicholas Roerich’s samadhi on a blossoming green hill is laced with fragrant pine groves, again reminiscent of Russian forests. As is the custom, visitors lay pine cones at Nicholas Roerich’s as a way of paying respect to the great philosopher. The samadhi is on a small corner of the estate that overlooks green hills and snowy peaks. Add a clear blue sky and this is as imposing and beautiful a setting as the painter would have liked for his final resting place in this world.

Helena Roerich wrote about the day her husband was cremated: “The day of cremation was exceptionally beautiful. Not a single breath of wind and all surrounding mountains were clad in fresh snowy attire.” She spoke of the crowds that came for the funeral and how the local people assembled deodar wood and “profusely poured (it) with aromatic oils.” One of those locals was 77-year old Laxman Roopkhety, who was 12 years old on December 13, 1947. “All the men of the village went for the funeral,” he said. “We were terribly sad because a Mahatma left us.”

Nicholas Roerich’s philosophy had tremendous appeal to Kullu’s hill people, whose Hinduism has elements of both Buddhism and Animism. The Russian philosopher’s ‘Living Ethics’ is a fusion of Hinduism, Buddhism, Russian Orthodoxy and other religions and philosophy, a synthesis close to the hearts of pluralistic Indians. In his book Altai-Himalaya, Roerich praises Indian Emperor Akbar, who tried to bring about a fusion of religions to unite the people of the country. So interlinked were his thoughts with Indian philosophy that in 2001, then-Indian Prime Minister Atal Bihari Vajpayee called Nicholas Roerich, one of the greatest “foreign-born Indians.”

The Roerich family also had a collection of folk art, which is on display at the Urusvati Museum, which is on a hilltop near the main gallery. In keeping with the family’s desire to propagate culture and learning, the trust that looks after the Roerich estate is actively pursuing educational activities. The Helena Roerich Art College offers courses for children in Indian classical music and dance, theatre art, folk drama and painting. Being the only art college in the locality, over 130 children come to the college every week for courses in activities as diverse as sitar and harmonium lessons to kathak dances. 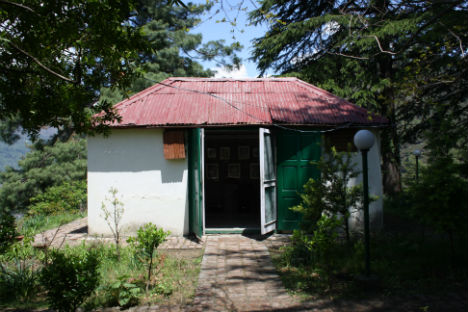 It’s difficult to not notice the Russian presence in Naggar. A stationary shop at the town’s main bazaar sells Russian-language phrasebooks. Most of the cafes near the centre of the town have menus in Russian and a few employees that can manage a decent conversation in the language. A popular cyber cafe even has a Russian flag and a calendar in Russian to go with computers that have ‘Yandex’ set as the homepage.

The cafe at the Roerich estate serves borsch, shii and blini, as well as Russian style potatoes and mushrooms. According to a waiter, the chef trained in Russian cooking comes to Naggar on May 1, for what he calls the “Russian tourist season.”

Anna Smirnova, a Lithuanian citizen of Russian origin, has been teaching Russian to locals in the tourist trade for the last 3 years. “I mainly give Russian crash courses for tour guides and waiters, when I come on vacation,” she says adding that the Kullu Valley is no place for Russian package tourists arriving on chartered flights. “It’s more an intellectual crowd but many speak little English.”

The raison d’etre for a Russian to visit the Kullu Valley is pay homage to Nicholas Roerich.  “Many admirers of the Roerich family come here, but there are several ‘adventure types’ en route to Laddakh who are looking for a nice place to rest in between rough Himalayan journeys,” Smirnova says.

Other Russians are looking at a longer stay in this picturesque Himalayan village. On the road leading up to the Roerich estate, Svetlana Bashlykova, a Russian artist, has set up a gallery with photographs from many of the places in northern India that the Roerich family visited.

65 years after Nicholas Roerich’s death, his work and legacy continue to play an important role in bringing together the people of Russia and India. 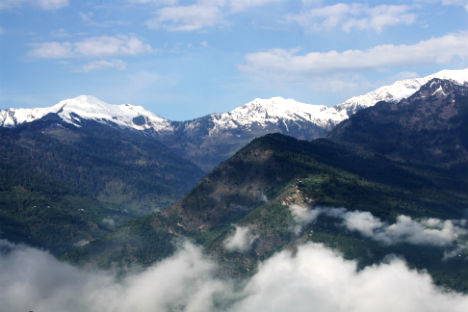