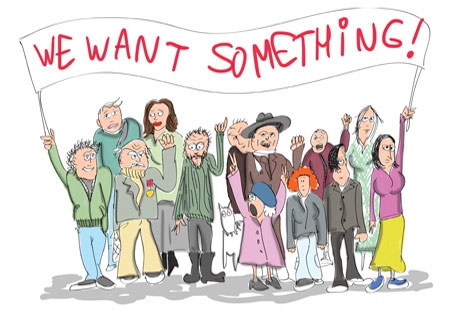 The protest movement in Russia may not be finished, but it also may not bring about the creation of democratic capitalism.

Former Finance Minister Alexei Kudrin believes that another economic crisis could bring about political change in Russia. He said so recently, speculating at the same time that the protest movement in the country had actually not died out at all, and that the masses will take to the streets again if the elite and the government do not offer a coherent economic policy that society can get behind.

Kudrin, a prominent member of the country’s establishment, has created a Committee of Civic Initiatives designed to consolidate political movements of all kinds and “openly oppose actions of the ruling regime notwithstanding personalities and posts.” In addition to Kudrin, the committee includes such men Igor Yurgens, a deputy chairman of the Russian Union of Industrialists and Entrepreneurs, nicknamed the Club of Oligarchs; Yevgeny Gontmakher, head of the Center of Social Policies under the Institute of Economy; and Nikita Belykh, governor of the Kirov Region.

Kudrin’s identification with the opposition is just another sign of the divide in the Russian elite that was non-existent during the first reshuffle in the Putin-Medvedev ruling tandem in 2008. Riding high on a wave of seemingly stable economic growth driven by high oil prices, the Russian elite rallied around the powers-to-be even though it was clear even then that reliance on exports of natural resources would ensure neither sustainable economic development nor liberalization of the regime. The small opposition parties not represented in the Duma did not question the mainstream neoliberal economic policies either. Their liberal members – small groups of Yeltsin-era politicians and human rights activists – mainly protested from time to time against abuses of administrative power and corrupt police. This created an impression in the West that since opposition members were not jailed for years but were allowed to organize protest rallies, Russia could formally be considered a democracy.

As a result, the first massive rally at Moscow’s Bolotnaya square in December protesting not only against perceived electoral fraud but also against Putin’s rule was an unpleasant surprise for the Kremlin. The composition of the gathering showed that the political order of things no longer suits the most active parts of Russian society - entrepreneurs, intellectuals and affluent citizens who constitute the fast-forming Russian middle class – and irritates even a part of the country’s elite.

The rally was supported by Mikhail Prokhorov, an ambitious oligarch who later ran for president. After he won 5.7 million votes, Prokhorov and his party became a noticeable political force opposing the Putin regime. The law on political parties recently adopted by the Duma and signed by outgoing president Medvedev will undoubtedly open doors to new political groups, Prokhorov’s among them, that purport to defend the interests of the general public and business communities on federal and regional levels.

Among such amalgamations, Right Turn, a political movement that will eventually become a party organized by the business association Delovaya Rossia (Business Russia), deserves special attention. The association unites entrepreneurs from 68 Russian regions who belong to 40 industrial business associations. In contrast to big corporations profiting from resource exports, members of Delovaya Rossia are oriented towards the domestic market and are professionally developing their businesses despite the unfavorable economic environment. Delovaya Rossia’s chairman Boris Titov believes that Russia needs democracy, but that it will come only when the now-forming middle class can make the authorities listen to its demands. The group’s liberal ideology, Titov says, already attracts many prominent business people and politicians, including those who are members of the ruling United Russia party.

Two centuries ago, classic political economic demonstrated that the structures of a nation-state are formed by and are fully dependent on the nation’s economic base – the form of ownership of the means of production and wealth creation. Russia now is undoubtedly a capitalist country and its institutional structures serve the interest of the capitalist class, notwithstanding Vladimir Putin’s claims that as the leader of the All-Russia Popular Front he will be “president of all the Russians.”

But Putin and his men have created a system of state-oligarchy capitalism that is in conflict with economic, social and political needs of the actual fast-developing Russian capitalism and the Russian business community at large has now a lot to fight for. A decade ago, Russian entrepreneurs owned at best medium-size businesses. A small number of big businesses belonged to newly rich and unscrupulous bankers and businessmen who befriended bureaucrats during the Yeltsin era and as a result of these connections privatized the most lucrative chunks of public property, particularly the extracting industries. Now, after over a decade of relatively fast growth, when the capitalization of the Russian economy increased from $250 billion to $1.25 trillion, the political clout of these Kremlin-friendly oligarchs who dictate national economic policies has become the main obstacle to diversified and innovative development of the Russian economy. The aspiring capitalist class is beginning to realize that not only their businesses, but the country’s economy and social life are desperate for transformation into a system of democratic capitalism. Hence, the entrepreneurs’ rising support for political and institutional changes to upgrade Russia’s superstructure and coherently address domestic and international challenges.

While private ownership in Russia is not challenged even by the Communists, other basics of capitalism need radical improvement. Among these basic needs are fair competition unhampered by corrupt bureaucracy and courts; most favored treatment for small and medium businesses, especially in the manufacturing and agricultural sectors; tax havens for developers of new technologies and innovative products; government funding of municipal, transport, social and cultural infrastructure; and sufficient budget outlays for education and healthcare.

These demands have not yet become eye-catching slogans in mass rallies. However, the political necessity of these economic and social ingredients that make up democratic capitalism are being realized by the middle class and may be next on the political agenda of movements and parties striving to change the existing regime. So far, the wide public discontent has been centered on such out-and-out abuses of administrative power as falsifying election results.

But now this discontent is expressed not only in connection with national elections. Strong protests against the results of a mayoral election in Astrakhan have shown that the demand for fair elections will be leverage for the opposition in upcoming regional votes across Russia. The March of Millions planned by the opposition for May 6 will also include demands for human rights and the independence of the judicial system. The majority of the Russian people see that more than two decades of Putinism (including the four years of Medvedev’s presidency) have not changed the country’s economic and social situation for the better.

One of the first responses to public demands for democratic changes was the reform of Russia’s political system by dismantling parts of the vertical of power created by Putin during his second presidential term. This reform involved a reduction in the number of members required to form a political party and a return to direct election of governors. Sensing the mood of their superiors, leaders of United Russia are discuss ways to reform its political stance or rebranding its reputation as a bunch of rubber stumping yes-men.

Additionally, the Kremlin could not help addressing such a painful problem as corruption. Medvedev initiated a draft bill to make government employees declare their purchases of anything that exceeds three years worth of combined household income. Meanwhile, Putin called the utilities sector highly corrupt and ordered state-owned companies to end the practice of top executives benefiting from deals with private contractors. Transparency of government purchases, proper governance of state-owned companies as well as tight control of spending in educational, healthcare and other budget-funded sectors are also focal points in the tandem’s make-believe struggle with corruption. The reform of the Ministry of the Interior, whose officers are often accused of abuses of law and corruption is also designed to improve the image of the regime in public eyes.

There is no doubt that Putin and his men would do their utmost to stay in power as long as possible and are ready to offer any concession that would not tie their hands. Putin even hinted that a new Russian government may include members of the opposition. A coalition government or an ad hoc agreement of United Russia with another parliamentary party may become the Putin-Medvedev tandem’s next maneuver. They just can’t afford to lose their political clout and all that comes with it. The fate of former Ukrainian Prime Minister Yulia Timoshenko – now jailed for abuse of power and personal enrichment – is a too vivid example of what can happen to a national leader when he fails to win political battles.

In this context, Alexei Kudrin’s forecast that a new economic crisis could cause a change of political power in Russia should not be waived aside as simply wishful thinking. A repeat of the financial crisis that shook the Russian economy in 2008-2009 would compel the majority of the Russian people to condemn Putinism. The problem is what comes next. So far, the liberal political movements and parties have not yet composed a common political platform to win wide popular support for building a democratic capitalist system. Boris Titov of Delovaya Rossia for instance, believes that if new elections were called, most Russians will vote for the Communists.

Thus the current political discontent in Russia is growing in a situation when there is no unity among liberal politicians that could offer a comprehensive alternative to economic and social policies of the state-oligarchy’s power system. Social turmoil brought about by a new economic crisis may break this system, but would not necessarily result in the election of leaders interested in building democratic capitalism in Russia.