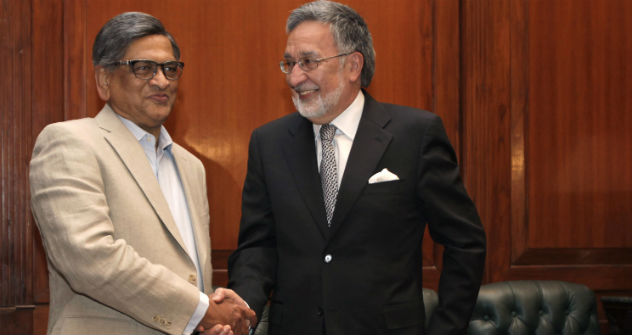 Foreign ministers of India and Afghanistan met in New Delhi 1st of May. There are issues of interest between the two countries, which may lead to a roadmap for the future bilateral relations.

Within six months of signing of the strategic partnership, the first of its kind between Afghanistan and any other country, during the visit of the Afghanistan President Hamid Karzai to India last October, the foreign ministers of both the countries met in New Delhi yesterday to add sinew to this relationship. S. M. Krishna of India and Zalmai Rassoul of Afghanistan co-chaired the first bilateral meeting India-Afghanistan Partnership Council on 1 May 2012. Indian Foreign Ministry stated that the “The visit forms part of the high-level engagement between the two countries and provides an opportunity for both countries to review and consolidate the implementation of their strategic partnership.”

There are issues of common interest which bring the two countries closer. Afghanistan is not far from Indian territory; in fact the undivided India was geographically contiguous to Afghanistan. A thin strip called Wakhan corridor separated the disputed Kashmir from Afghanistan. While Pakistan shares long borders with Afghanistan and influences its politics to significant extent, India’s concerns are more confined to humanitarian developments and stability in the region, and to contain the spill over effects of terrorism and fundamentalism. India is one of the largest donors towards reconstruction work in Afghanistan, and as the strategic partnership document signed last year both the countries have further reiterated their commitment to strengthen the relationship. The document in its section on political and security cooperation emphasized that India will “assist, as mutually determined, in the training, equipping and capacity building programmes for Afghan National Security Forces”.

Another issue that strikes the Afghanistan leadership is how to cope with the emerging situation after the withdrawal of NATO forces. The withdrawal issue is wired with controversies, and particularly after the signing of the strategic partnership document between Afghanistan and the US last week, it is likely that the US presence in the region will be prolonged. But, the ground forces will like be reduced. As per reports, by this year end the forces will be reduced to the strength of 68,000 in comparison to about 1,00,000 at present. India is interested to contribute the ‘training and capacity building’ of the Afghanistan forces, and at present various Indian institutions have about 150 slots for the Afghan security personnel. The meeting by the foreign ministers will further strengthen this mutual cooperation by increasing India’s assistance in building Afghanistan forces.

Another worry for India is the possible escalation of violent activities in Kashmir, once the Taliban gains upper hand in the affairs of Afghanistan. The Indian Air Force Chief few days back had expressed concern about such a likely scenario in a Taliban-dominated Afghanistan. The past memories particularly that of late 1980s and early 1990s hurt deep. Aftermath of the withdrawal of the Soviet forces and the victory of the Mujahideen supported by Pakistan and the US, the militant violence in Kashmir was escalated. Such a scenario both India and Afghanistan will prefer to avoid by developing bilateral mechanisms. This meeting of the foreign ministers will be preceded by the meeting of the Joint Working Group on political and security relations, headed by Indian Foreign Secretary Ranjan Mathai and Afghan Deputy Foreign Minister, Jawed Ludin. Both the countries have given emphasis on sharing ‘real time intelligence’ through more active interactions. An Indian Foreign Ministry official stated, “We are working on a new mechanism and from now on the intelligence sharing will be on a more immediate basis instead of through routine letters.” He further added that “Our ambassador in Kabul has already been asked by Krishna to share details promptly with Afghan authorities and ensure follow up action to avert any disaster. He will take up the matter again with the Afghanistan foreign minister when he discusses security issues.” Hence, it is expected that in coming months there will be more interactions between officials of the two governments at New Delhi and Kabul.

Rassoul met top Indian leaders including Prime Minister Manmohan Singh, Finance Minister Pranab Mukherjee and National Security Advisor, Shiv Shankar Menon. He apprised Indian leaders about the situation in Afghanistan, about the country’s future policies and its stance in the forthcoming NATO summit at Chicago. The bilateral interactions between the two countries have become more crucial in view of the last month’s series of attacks in Kabul’s diplomatic enclave and some other parts of Afghanistan. Earlier in the month of March, India had issued an alert to its officials in Afghanistan about impending terrorist attacks in the country. Sections of Indian intelligence agencies consider the alert as a kind of forewarning the attack of April 2012, in which more than 15 people were killed by the attacks. These attacks were claimed by the Taliban. Hence, sharing of real time information, and devising of mechanisms to tackle this problem of instability and violence in Afghanistan dominated the meetings.

International terrorism, organized crime and drug trafficking are some of the issues that was deliberated in detail in the meetings. Despite the decimation of Al Qaeda leadership last year, it is still active in Afghanistan-Pakistan border, and its sister organizations particularly Haqqani network and the Taliban are gaining strength with passing days. These later two groups have vast networks in the region, and even run shadow governments in Afghanistan. One of the major sources of their income is puppy cultivation. Their terror networks are not confined to the region, rather they spread to wider regions of Central Asia (the recent rise of Waziristan based Jundullah militant network in Kazakhstan is a case in point), the neighbouring countries, Kashmir, North Caucasus and other parts of the world. The famed silk route has been used by these organizations to spread their culture of violence and hatred, and for drug trafficking. From this point of view, the bilateral summit becomes a significant one, as it addresses some of the pressing issues confronting South Asia and the wider region of Eurasia.

The meeting will lead to a roadmap for the future in a post-NATO Afghanistan. Peace and stability in Afghanistan is crucial for peace and stability for South Asia and beyond. Though the players appear to appreciate this imperative of conflict and peace in this part of the world, the rigid national interests seem to play road block in developing a regional framework to address the contentious issues afflicting Afghanistan. Bilateral animosities and the past disputed legacy colour the perceptions as well as relations, thus marring future prospects of cooperation. Fundamentalism seems to have trumped over multiethnicism and multiculturalism. Imagining the history in a positive way, in which for instance the famous Sanskrit Grammarian was born in the present day Kabul, and the famous Sufi Saint Khwaja Moinuddin Chisti chose Indian city of Ajmer (recently Pakistani President made his pilgrimage) for his abode, will salvage much of the animosities in the region.