The great game comes to Bangladesh 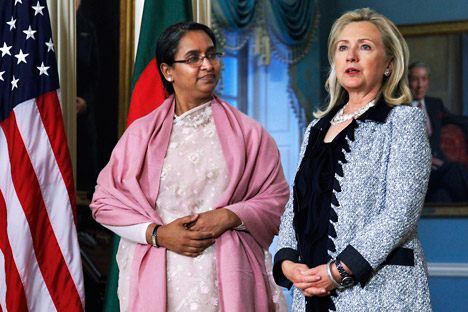 Hillary Clinton visit to Dhaka intrigues Bangladeshi observers. But the most interesting thing here is the strategic coordination that takes place between Washington and New Delhi in relation to Bangladesh.

The two-day weekend visit by Hillary Clinton to Bangladesh underscores an intensification of the United States’ regional policy in South Asia and it cannot but be seen as a related process to the ‘pivot’ to Asia in the American foreign and security policies. Clinton’s visit holds significance across several overlapping templates – US-Bangladesh bilateral ties, India-Bangladesh relations, regional security, energy security and the US’ strategies in South Asia as a whole.

The US state department announcement said that whilst in Dhaka, Clinton proposed to “review robust US-Bangladesh cooperation across the full range of political, economic, and security matters.” The statement gives a deceptive air of ‘routineness’ to the visit. But in actuality, the visit is a rare event – last visit of a US secretary of state was by George Schultz – and indeed Bangladeshi observers are intrigued why such a high-flyer personality like Clinton, who is about to lay down office and apparently contemplating quitting public life altogether, should bother to land in Dhaka in the twilight zone of her distinguished run as America’s top diplomat – and, that too, with hardly any prior notice.

Some imaginative Bangladeshi wits have scratched the bottom of the barrel and come up with the queer thesis that Clinton decided to come to express solidarity with Nobel Laureate Mohammad Yunus who used to head the micro-financing institution known as Grammen Bank and was summarily eased out from that position by the leadership in Dhaka.

In fact, to outside observers, it all but seemed that the US-Bangladeshi ties became a bit too unnecessarily testy when Dhaka chose to ignore the US pressure at the highest level to give an honorable exit to Yunus. Suffice to say, Dhaka wears a somewhat dazed look that Clinton is dropping by, albeit over a weekend.

Bangladesh is by no means smitten with ‘anti-Americanism’ and the elites have a healthy appreciation that a close partnership with the US can potentially unlock the door that leads to the country’s graduation as a middle-income country in a conceivable future. The trade with the US accounts for 40 percent of all of Bangladesh’s exports. And if Washington shows the generosity to do away with the tariff barrier on garments, Bangladesh’s exports will zoom. Market access is all the Dhaka needs, being a competitive performer. Then, of course, Bangladeshi elites know the scale of the US’s influence over the international financial institutions and Dhaka has the brainpower and the absorption capacity to utilize multilateral funding to accelerate its economic development. All that is needed is a helping word or two from Washington with the World Bank or the IMF.

However, it is not entirely correct to say that US has abruptly changed course and set its eyes on Dhaka. A momentum has been building up lately. The first-ever security talks between Bangladesh and the US were held in Dhaka on April 19 focusing on security challenges facing the two countries. The US press readouts on the talks said, “This inaugural Dialogue on Security Issues highlights the robust engagement between the United States and Bangladesh as well as out growing defence relationship.” They added that Washington expected the Security Dialogue to broaden and strengthen bilateral cooperation on a wide range of political-military issues, and enhance cooperation in peacekeeping, joint military exercises and exchanges, counterterrorism, and security cooperation. “The positive and substantial exchanges of the dialogue reflect the breadth, depth, and strength of the bilateral defense relationship, as well as our shared commitment to peace and prosperity in the region.”

The Security Dialogue was not a flash in the pan, either. There has been a steady stream of senior US officials to Dhaka, the last being the Under Secretary of State for Political Affairs Wendy Sherman in April. Andrew Shapiro, US assistant secretary in the bureau of political-military affairs, who led the American side at the Security Dialogue in Dhaka, later said:

“Indeed, over the past decade, the bilateral defence relationship… has become one of the most robust in South Asia. Bangladesh is a key player in maintaining security in the Bay of Bengal. They are an active partner in regional counterterrorism efforts… Our cooperation with Bangladesh is a prime example of how US security assistance can play a critically important role in our diplomatic engagement.

“Bangladesh is also working through a military modernization plan, which includes looking to partners for affordable defense systems...  This modernization effort provides an opportunity for us to expand our security cooperation, especially through our Excess Defense Articles program, which makes U.S. equipment that is surplus to our requirements available to our partners… Additionally, we provide assistance to support Bangladesh’s peacekeeping efforts… And through our training initiatives and exchanges we are helping professionalize its national military forces… In short, our security assistance is playing a critically important role for… the national security of the United States.”

One curious feature of the US-Bangladesh exchanges is that almost all US officials are making it a point to come to Dhaka via New Delhi or to make their return journey to Washington via New Delhi. Evidently, it is not a mere matter of logistics. The pattern shows an appreciable degree of strategic coordination taking place between Washington and New Delhi in relation to Bangladesh. It could be even greater than the intensity and transparency of the US-India coordinated strategy toward Myanmar. The ‘robustness’ of the US-Bangladesh relations runs parallel to an unprecedented upward curve in the trajectory of the India-Bangladesh relationship, which has been lackluster in the recent decades.

Quite obviously, the US policies toward Myanmar and Bangladesh are inter-connected and, in turn, they emanate out of Washington’s ‘containment’ strategy toward China. Clinton’s visit to Dhaka follows her recent trip to Myanmar – and from Dhaka she is proceeding to India. The state secretary’s South Asian jaunt is also sandwiched between the meeting of the US-China strategic dialogue forum in Beijing this week and the forthcoming session of the US-India strategic dialogue in Washington next month. Clinton co-chairs both these forums.

Interestingly, there are reports that Washington is seeking a similar strategic dialogue forum also with Bangladesh. It is strongly hinted that during Clinton’s visit to Dhaka, a joint document may be finalized titled ‘Bangladesh-US Partnership Dialogue.’ A senior Bangladeshi foreign ministry official has been quoted as saying, “Both countries feel that there should be a structured umbrella forum under which the two countries will hold regular dialogue on a full range of bilateral issues like political, economic and security issues.”

Of course, the US regional policy gains by showcasing a robust relationship with a moderate Muslim majority country like Bangladesh. But from the US perspective, geopolitics and energy appear to be the compelling themes of Clinton’s visit. Simply put, Bangladesh’s strategic location enhances its importance for the US to try and bring Bangladesh into the ambit of the US-India axis, which has taken shape in the region. (Myanmar and Sri Lanka become two other similar ‘target’ countries for the coordinated US-Indian regional strategy.)

Unsurprisingly, India is content with taking a back seat as a junior partner (given the sensitivities of its small neighbors) and is letting the US take the lead role in advancing their regional strategy. It is, admittedly, an ambitious project, as it is predicated on a dramatic improvement in the climate of mutual trust among the countries of the region – and in their ties vis-à-vis India – and, more important, on their willingness to serve as surrogates in the US’ containment’ strategy toward China. Bangladesh or Sri Lanka, for instance, have dynamic cooperative relationships with China, which are beneficial for them in every way, including as a counterweight to the perceived Indian ‘hegemony’ in the region. Suffice to say, Clinton’s visit to Dhaka augurs the arrival of the great game in the Bay of Bengal, which has otherwise been lurking so far in and around the Malacca Strait.

However, for a superpower, what is geopolitics without business opportunities? To be sure, a stunning new development has been the resolution of the longstanding maritime dispute between Bangladesh and Myanmar following the verdict given by the International Tribunal for the Law of the Sea on March 14. The tribunal has awarded 111, 000 square kilometers of exclusive economic zone in the Bay of Bengal (roughly the same size as Bangladesh landmass), which gives it the sovereign right over all resources currently available there for exploitation and all resources that may be discovered in the territorial sea around St. Martin’s Island. Interestingly, it was the strong likelihood of newly accessible gas reserves in the Bay of Bengal that motivated Bangladesh and Myanmar to pursue a solution in the international court. There are estimates of various types of mineral deposits in the region as well, including cobalt, manganese, copper, nickel and sulfite.

Moreover, the tribunal’s award also strengthens Bangladesh’s case in its maritime dispute with India on the western side of the Bay of Bengal where India has been insisting on the principle of equidistance instead of equality in demarcating the maritime boundary. (A verdict by the international court is expected in 2014.)

Without doubt, a specific objective of Clinton’s visit is something that that Washington has been pressing for, namely, the conclusion of a Trade and Investment Cooperation Framework Agreement [TICFA]. After some tough negotiations, the document is almost ready for signature. There is compelling reason for Clinton to push for the signing of the TICFA and it could even be the leitmotif of the extraordinary move that Washington made by scheduling a state-secretary level visit to Dhaka at this juncture.

However, it is too early to say that the US-India axis would succeed in blocking China out of the Bay of Bengal. The mystique of the great game is that it is a many-splendored thing. Countries like Bangladesh and Myanmar (or Sri Lanka and Maldives) are also aware of the strategic space that is available to them to safeguard their vital interests in the multi-polar world.