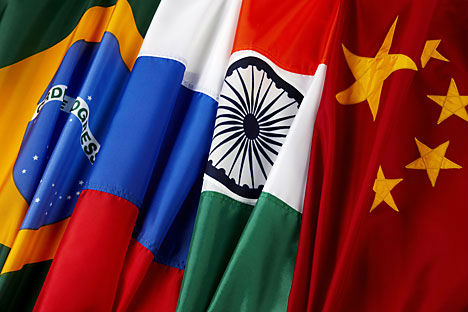 Goldman Sachs Jim O'Neil believes that balance of power in the global economy will change completely in near future, with emergence of new "growth markets" leading to a substantial rise in the wealth of these countries.

We believe that the balance of power in the global economy will change completely in the foreseeable future. The emergence of new "growth markets" which we are now seeing, and which for the most part are still referred to as emerging markets, will lead to a substantial increase in the wealth of these countries.

Let me first give some simple examples with figures. According to the calculations of the Department of Economic Analysis at Goldman Sachs, the five largest economies in the world in 2050 will include the four BRIC countries (Brazil, Russia, India and China) plus the United States. Our experts predict that by 2050 the combined GDP of the Next-11 countries, which, according to Goldman Sachs in 2005, include Mexico, South Korea, Indonesia, Turkey, Iran, Egypt, Nigeria, Bangladesh, Pakistan, Philippines and Vietnam, will surpass the U.S. GDP and will be twice the GDP of the EU. These figures give us an opportunity to see one of the biggest shifts in the balance of power in the global economy. The advantage is being transferred from the "Big Seven" countries, which have historically dominated the world stage, to the dynamically developing countries of Asia. By considering the driving forces of this phenomenon in more detail, we can better understand this process of growth.

One of the key factors of change now taking place on world markets is what we have been expecting to see for a few years now - global economic growth, whose growth rates will be above average. According to Goldman Sachs, the world economy will grow by an average of 4.3% per year until the end of this decade. Such  a growth rate is significantly higher than the average observed over the last three decades. We believe that the four BRIC countries and other "growth markets" will become the main driving force behind the high level of global economic activity. Right now, a consensus has formed that growth rates in the BRIC countries over time are likely to decrease. In addition, the term "growth markets" itself should not direct us to the assumption that the economies of these countries will grow each year. In the future, these countries will go through various stages of the economic cycle, just like all the others. However, the nominal capacity of the economy created by the BRIC countries combined with the high growth rates of the Next-11 countries will provide a powerful stimulus that is capable of fueling high rates of global economic growth. The share of "growth markets" in the growth of the global economy will be very high. According to the latest projections, the eight "growth markets" that Goldman Sachs Asset Management identifies as the four BRIC countries plus the four strongest countries of the Next-11 (Mexico, Indonesia, South Korea  and Turkey) will be responsible for economic growth totaling more than $15 trillion between 2011 and 2020.

If we look further into the future, these historically important changes can be seen even better. Right now, of course, it is impossible to accurately predict the economic development of countries around the world before 2050: trends that are already showing themselves will very likely lead to abrupt changes. Almost all of the "growth markets" have a positive demographic situation and, therefore, should be in a good position in the future to cope successfully with the problem of significantly increasing productivity that will change the model of these economies. Many experts now expect that over the next few decades economic growth in many Asian countries will be determined by an increase in the young urban middle class possessing significant purchasing power as well as by an increase in the demand by this population group for consumer goods and luxury goods. In addition, consumer behavior in emerging markets is likely to become a much more important factor for us. The determining stimulus for the economic development of these countries will cease to be the low-cost production of goods for export, and domestic demand for these goods will move into the foreground. Goldman Sachs Asset Management believes that the eight "growth markets" are capable of increasing global consumption by an additional $800 billion per year by 2025 even without considering other countries.

According to our estimates, the total purchasing power  of the BRIC countries will become comparable to the purchasing power of the entire Euro zone over the next two to three years, and then the BRIC countries will overtake the United States and become the largest consumer market in the world. We believe that this growth will also lead to a significant change in per capita income. In 2050 the G7 countries will continue to be the richest in the world, but income inequality will be significantly reduced. According to current estimates, by 2050 average per capita income in Russia and Korea will be only slightly behind the average of the Euro zone. By that time Brazil will be able to become richer than China, and Nigeria, a country with the largest population in Africa, may perhaps catch up to India. We expect that the greatest growth in per capita income will occur in Bangladesh, Pakistan and Vietnam. It is very likely that in Vietnam by 2050 it will grow from its current level by a factor of 17. The development of consumption will become an important investment topic of this decade.

Of course --- and regularly scheduled summits of BRIC leaders have already given us an example of this - many countries with developing economies base their aspirations to world leadership on the success of their economic models (and improving their people's welfare). Most of these countries are seeking to improve their system of government and corporate governance. Companies from India, South Korea and China have already reached the level where some of them can truly be called global brands. They have brand names and goods that consumers around the world associate with high quality. These companies are among the most successful in those markets where they operate.

In our opinion, changes in these countries over the medium term will also change the behavior of many investors. Rapidly growing countries around the world will become more and more viable alternatives for investors wishing to leave the developed markets (with their consistently low rates of growth, high debt to GDP ratios and aging populations). Even despite the fact that many of the emerging "growth markets" need stability to achieve the success described above, their potential is impressive, and they have a good chance of achieving the projected growth rates.

Russian text is published in Vedomosti