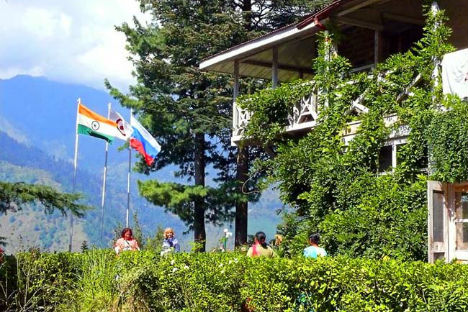 Ajay Kamalakaran discusses Roerich Memorial controversy, recalling the historical aspects which are in favor of conciliation of the interests.

The controversy over the running of the International Roerich Memorial Trust in Naggar, Himachal Pradesh is turning into a major irritant in the otherwise strong cultural ties between India and Russia. Many arguments have been made by both the Himachal Pradesh government and the Russia-backed trustees of the IMRT over the merits of their positions.

Moving away from these arguments, I would like to draw the attention of readers in India to the sensitivity of the issue in Russia with the following hypothetical analogy. Imagine the KwaZulu-Natal authorities decide to take over the trust running Mahatma Gandhi’s Phoenix Ashram near Durban in South Africa.  What if the authorities demanded that the Indian Government or its appointees have no role in the running of the trust and even ask for the Indian Ambassador to stay away from the working of this trust?

There would be pandemonium in the Indian houses of parliament, condemning South Africa and probably an adjournment of proceedings, like we witnessed in December when there was an ‘ISKCON Bhagawad Gita controversy’ in far-away Tomsk. The 24-hour news channels would be spewing hatred against South Africa and KwaZulu-Natal and the newspapers would be printing regular editorials almost coercing the Indian Government to act.

One has to credit the Russian Government and media for behaving in a very mature and responsible manner by not blowing the controversy out of proportion. It is audacious that some petty bureaucrats from Himachal Pradesh have taken objection to Ambassador Alexander Kadakin being in the International Roerich Memorial Trust. The Russian Ambassador has dedicated a lion’s share of his professional career and personal time to bring Russia and India closer together, leave alone his lifelong quest to promote Nicholas Roerich’s legacy.

Roerich means a lot to the people of Russia. For an apolitical set of people, who are confused about historical legacies of its rulers like the Romanovs and Communists, Roerich is some kind of unifying non-political force in the country of his birth. As a philosopher, artist, writer and archaeologist, Roerich has the kind of reverence in Russia that both Mahatma Gandhi and Rabindranath Tagore have in India. Attempts to push Russia out of a place that is the final resting place and long-term home of Roerich will sour cultural relations even between the people of both countries.

After spending a better part of April in the Kullu Valley, I noticed that virgin hillsides are being encroached upon by developers who want to fill the picturesque valley with resorts for a growing number of tourists.  A villager even remarked to me over the last fortnight that the ‘abode of the gods,’ as the Himachal government calls the state, is becoming the ‘abode of the land mafia.’

Recently, the Indian Army complained that the Himachal Pradesh government is trying to take over the strategically important Annadale ground near Shimla, which is the base for launching disaster-management and relief operations, and turn it into a cricket stadium. The army’s Western Command even said, “Rather than initiating measures to bring additional areas under forest cover, the state seems to be hell bent on destroying the meagre existing forest cover, all at the behest of land mafia, eyeing phenomenal profits, which the cricket stadium would bring.”

The Roerich family estate sits on prime land in a region that has several tourist treasures. Local villagers have even hinted that the very land mafia is eyeing the property of the estate and the priceless paintings that it houses. Himachal Pradesh Government officials have rubbished such claims but it isn’t very clear why the state is so eager to seize control of the estate.

A few visits to the estate over the last fortnight and interactions with families who send their children to the Helena Roerich Art College, revealed that the trust has done a good job in advancing the educational and cultural goals of the Roerich family. The estate and the museum are also well-maintained. An annual visitor from Moscow (with no connections to the trust) also insisted that the estate was much better looked-after since the Slovakian curator joined the trust over 10 years ago.  Adamkova, who has been subject to outright harassment from the Himachal government, was very reluctant to talk to me about the controversy. She just maintained that if she was “thrown out” of the estate and Naggar, someone else would carry on the good work and maintain the estate well.

Rabindranath Tagore said, “Patriotism cannot be our final spiritual shelter; my refuge is humanity. I will not buy glass for the price of diamonds, and I will never allow patriotism to triumph over humanity as long as I live.” Just like Tagore doesn’t belong exclusively to India, Roerich doesn’t belong exclusively to any country.  According to media reports, Russia has called for a body like the Indian Council for Cultural Relations (ICCR) to run the trust. Such a demand can in no way be considered unreasonable.

The Russian Government took urgent steps to resolve the row over the banning of ISCKON’s Gita in Tomsk and it is imperative that New Delhi show the same promptness to address Russian concerns. Being an issue of international importance, the Indian Government must play a proactive role in resolving the conflict over the Roerich estate.