Russian toe in the Indian Ocean 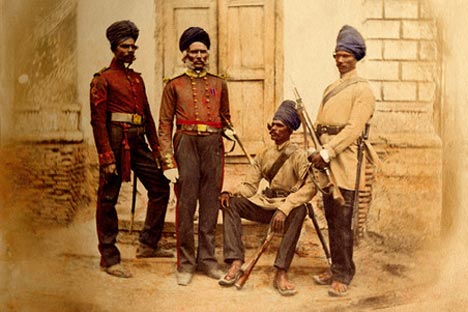 Yet many Russians still have no clue what Great Game phrase refers to, and another widespread name for the Great Game, the Tournament of Shadows, perhaps helps one understand why. Source: en.wikipedia.org

The publication of The Great Game, 1856-1907: Myths and realities of Russian-British relations in Central and Eastern Asia by Evgeny Sergeev shed light on the key geopolitical intrigues in Eurasia that are still influencing the political landscape of the continent.

This story started with an anecdote, followed by various diplomatic incidents and military operations, and it never ends. The Great Game, which at the time had not yet been given this or any other title, was launched by the famous Indian March initiated by the Russian Emperor Paul I: a Cossack force under Vasily Orlov’s command was sent to conquer India but only managed to reach Saratov when the Emperor was “accidentally” murdered and the campaign came to a halt.

This failed invasion might have remained just a historical anecdote but, unfortunately, it aroused fear in Britain. For some reason – no one knows exactly why – the British developed a very strong phobia: Russia was going to come from the North and conquer their India.

All the appeals to reason and thousands of kilometres of harsh desert and mountains separating the two empires had no effect: the British recognised the validity of these claims intellectually but the image of the scalp-locked Cossacks rushing down the Hindu Kush mountain range towards the pearl of the British Empire gave them nightmares.

Naturally, as always, the conviction of the imminence of aggression soon was transmitted to the assumed aggressor. “Why not?” thought the Russians and began penetrating Central Asia.

In response, the British broke into Afghanistan, so the two empires started their dance – timid at first but increasingly more dangerous and later mesmerising. British Captain Arthur Conolly, before he was beheaded in Bukhara, dubbed this dance the Great Game and Rudyard Kipling, the best poet of empires ever, introduced this term into the public consciousness.

Yet many Russians still have no clue what this phrase refers to, and another widespread name for the Great Game, the Tournament of Shadows, perhaps helps one understand why. In fact, the two imperial powers never engaged in direct military confrontation. Fortunately, they confined themselves to pulling strings in other countries and engaging in a never-ending intelligence war – something that no Russian governments under any regime have been willing to disclose.

Hence, most Russians still believe that one of the key Russian field agents, Nikolai Przhevalsky, was exclusively preoccupied with his search for the wild horse that was later named after him.

In contrast to Russia, in Britain, the Great Game has become one of the most popular historical subjects. From the very outset, it naturally became part of the Victorian agenda: take, for instance, Doctor Watson, who returned to England from Afghanistan or Rudyard Kipling’s Kim. In the late 20th century, the topic enjoyed a new wave of public interest, sparked by an incredibly captivating investigation carried out by Peter Hopkirk in his popular science book The Great Game, which sold more copies than many traditional bestsellers.

It was also very popular in Russia. Since its publication, history fans have kept on buzzing: “So, where’s our version of the Great Game?” The lack of any adequate response to Hopkirk is even more shameful given that the Russian side of the Great Game story was way more dramatic, exotic and simply cinematic than the British one.

Russia’s players were, quite often, not Russian at all: the extremely dangerous raids, both legal and illegal, attracted very exotic characters.

Lieutenant Valikhanov, a Kazakh of most noble origins who disguised himself as an Uzbek merchant, served Russia. One of our best agents in Afghanistan was Vitkevich, a native of Poland who demonstrated incredible prowess at learning oriental languages during his exile in Orenburg. The mystery of his death in a St Petersburg hotel the day after a meeting with the Tsar still stirs the imagination of conspiracy theorists. Other examples include Kuropatkin, future military minister of the Russian Empire and antihero of the Russo-Japanese war; the future president of Finland, Swedish Baron Mannerheim; ethnic Buryat Badmayev, who almost outplayed the British in Tibet but became too politicised and close to the Tsar, which ruined his plans; Avar of noble origins Alikhanov, who was demoted to Private for duelling and led a brilliant operation that allowed Russia to annex Merv with no blood spilled. Even the failed Russian dictator General Kornilov headed illegal raids into, Persia successfully disguising himself as a Turcoman caravan leader thanks to traits he inherited from his Kalmyk mother. When he was transferred from the secret service to the “conventional” military, he was already a very high-ranking officer.

Alas, all these stories can only be found in archives, rare articles and conference presentations. We did not have much to boast of: a few biographies of the Game’s active participants and the book Strife on the “Roof of the World” by Alexei Postnikov, which is a rather interesting piece of scientific prose but difficult to read and dedicated to just one episode of the Game, the Pamir matter. There had been no comprehensive works, and The Great Game by TV journalist Mikhail Leontyev does not qualify as such, because it consists of a written compilation of his TV series with all the related drawbacks.

Such a book has at last been published and it presents a very good summary. The point put forward by Evgeny Sergeev may be arguable but one has to admit that, over five years, the author had done a tremendous amount of work gathering information from British sources and investigations, as well as Russian archives.

Indeed, his concept of the Great Game may seem questionable but he is the first to examine the matter in the all-encompassing way. There is apparently not a single relevant topic that he missed. Moreover, this book covers more aspects of the Great Game than most British works (and there are dozens of them). In fact, the author convincingly proves that the Central Asian standoff (to which the British usually limit their studies) was not the only stage for this confrontation. The adversaries constantly shifted towards the East: the Game started in Persia and Afghanistan (if not the Caucasus), moved to Central Asia, then to Mongolia and Manchuria through Chinese Xinjiang and stopped only at the shores of the Pacific.

Yet, despite all its advantages, the book cannot be considered as our long-awaited “response to Hopkirk”. The general public will find difficult in reading it and it is no coincidence that only 800 copies of the book have been published. The Great Game, unlike its British counterpart, is not a brilliant non-fiction novel, as captivating as an adventure story. It is a scientific work with all the drawbacks of this genre.

Like any other typical academic researcher, Sergeev does not even consider the possibility of refraining from professional gobbledygook, which bores the ordinary reader. But this is not the worst part: Sergeev, as a true scientist, is mostly concerned with acquainting the academic world with the new information he was able to dig up. He rushes through the facts studied in other works, assuming that everyone is already aware of them, but this is true only of a rather small community of historians.

So the reader will not be able to find in this book the story of General Chernyaev, who invaded Tashkent, with its several thousand residents, with only a bunch of soldiers under his command and no authorisation whatsoever. Then he strolled down the blood-spilled streets on his way to a sauna, demonstratively and audaciously alone, to show the citizens that a new boss was in town.

Nor one can find here the story of how the two key figures in the “strife on the Roof of the World”, the Pole Bronislav Grombchevsky and the India-born British citizen Francis Younghusband, began corresponding in their later years, in the 1920s. Once they were young and impudent army captains driving emperors mad and causing havoc in foreign affairs ministries. Then the former general lieutenant of the tsarist army and governor of Astrakhan, who lost everything during the Revolution and became a penniless pensioner in independent Poland, was writing to a subject of the British Empire knighted after his invasion of Tibet, President of the Royal Geographical Society, the unrivalled conqueror of Mount Everest and founder of a new religion.

Grombchevsky had a poor command of English and Younghusband did not speak Polish or Russian, so they exchanged letters in Farsi, a language both the former spies spoke fluently. Perhaps “former” is the wrong word, for when Kipling said “When everyone is dead, the Great Game is finished. Not before”, he meant it.

Russian text is published in Lenta.ru