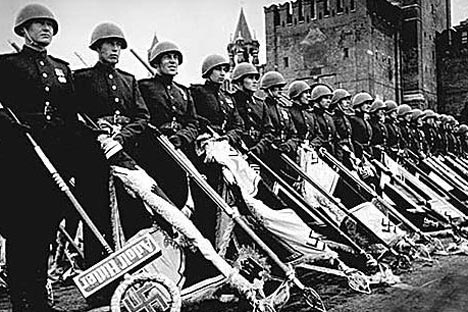 Captured German flags were trown under the Lenin's Mausoleum during the Victory Parad (24.06.1945)

Every profession in Russia has a holiday in its honour, but very few “real” holidays are marked in the country with such gusto and fanfare as May 9, Victory Day.

If the New Year is a festival of hope and March 8, a day to honour the beautiful women of Russia, Victory Day is the most solemn of occasions, when the country remembers the Second World War and the day the heroic Soviet Armed Forces defeated Nazi Germany.

Every city in the former Soviet Union has a memorial for those who laid down their lives in the war that is called the Great Patriotic War in Russia. While official figures of deaths tend to be hazy and debated, it is a well-accepted fact that the Soviet Union lost close to 27 million lives. The war that began for the Soviet Union when Nazi Germany launched ‘Operation Barbarossa’ on the summer solstice day in 1941, permanently created a demographic imbalance in Russia. Most parts of central Russia were flattened by the fury of the war, many women widowed and many children orphaned.

The scars of the war remain even now in the minds of those who lived through that nightmare. “I had less than 150 grams of bread a day, which I ate with sawdust,” says Svetlana Temnorod, a 91 year-old from St Petersburg, who survived the 900-day Nazi siege of Leningrad (as the city was then called). Her husband was captured by the German troops in the front and almost immediately shot dead because of his Jewish roots.

67 years after the end of the war, many who survived those nightmarish years have passed away, but the memories of those days live on in their families. 65-year old Valery Karpov, a resident of the city of Khabarovsk was aghast when he saw a few skinheads in St Petersburg walking around in Nazi war uniforms. “If someone did that in the 1970s, we wouldn’t have needed the police to arrest them and put them in the worst of prisons,” he says. “The public would have lynched them.” Karpov, who was born and raised in Tambov in central Russia, lost 3 uncles to the war. “I grew up at a time, when we had to build the country from nothing and it was in large part, the women who built a lot of the post-war infrastructure,” Karpov says.

The war is a very important topic in history books in Russian schools and the state is particular that the sacrifices made by the Red Army and the Soviet people to defeat the greatest evil known to mankind are not forgotten. Dmitry Verin, a school teacher in Khabarovsk, says his students make small presentations on the experiences that their grandparents had in those days. “This freedom from Fascism and ideologies of hate was hard-fought and the children realise this when they speak to their older family members,” according to Verin.

The world knows of the great May 9 parade held in Moscow every year, which is also one of the most watched programmes on Russian television, but the essence and spirit of Victory Day is felt most in thousands of small towns across the vastness of the country. It’s in these smaller towns that entire families converge with bouquets to the ‘Slava’ Squares, the war memorials with eternal flames. The names of those who lost their lives in the war are engraved on the wall and it’s hard to miss a single surname on these walls as there is probably not a single family that didn’t lose a loved one in the war.

Many in the Russian Far East also lost loved ones in the fight to liberate Southern Sakhalin Island and the Kuril Archipelago from four decades of Japanese occupation. There were also several casualties in the fighting in what was then called Manchuria in China. The memorials in cities like Vladivostok, Khabarovsk and Yuzhno-Sakhalinsk also pay homage to these martyrs who protected the farthest outreaches of the country.

Once the memorial services and the army parades are over, there are cultural programmes, which are a glimpse into the Russia of fairy tales. No programme is complete without some rendition of ‘Katyusha,’ a song composed in 1938, depicting a girl longing for her beloved husband who was away serving in the military. ‘Katyusha’ is one of the most recognisable Russian tunes around the world and there are even Hebrew, Greek, French, Italian, Sinhalese and Malayalam versions of the song.

With the warmer May weather and the summer looming in the horizon, this is a time to go out for barbecues in the countryside. A time to give the summer cottages or dachas a spring-cleaning and set up the flower beds for the warmer days ahead. Traditionally, May 9 ushers in a period of warm weather, late sunsets and an overall excitement in the air. It often takes an outsider by surprise to see how drastic the change in public mood is in the month of May. There is a collective rise in spirits in anticipation of the summer.

Alla Kondratieva, an information technology specialist working in the south Indian city of Hyderabad gets the most homesick around Victory Day. “I loved the time around May 9 in Russia, back in my hometown (Ryazan) because it was the month before the long school holidays, and in Moscow in university, it turned out to be the most romantic month... but here in India - I'm happy to spend it in the air-conditioned office.” Kondratieva and other Russian expats quietly mark Victory Day in countries that weren’t affected on such a grand scale by the war.  In Hyderabad, she watches DVDs of old war films, a staple on Russian national television during the May holidays.

Back in Russia and most former Soviet Republics, very few holidays promote greater unity across ethnic lines and even fewer occasions are looked upon with more pride than the anniversary of the day Berlin fell into Soviet hands and ending years of bloodshed.