Anand versus Boris: A symphony of chess and culture 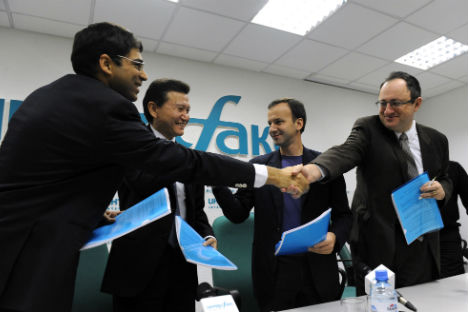 Viswanathan Anand (left) and Boris Gelfand shake hands during a press conference in Moscow last year. Kirsan Ilyumzhinov, president of the World Chess Federation (second from left) and Arkady Dvorkovich, head of the Supervisory Council of the Russian

In a rare event, the world chess tournament will kick-off amid iconic artwork at the famous Tretyakov Gallery (Moscow) on May 10.
Chess and culture are set to create a perfect symphony or mosaic in Moscow on May 10. On that fateful day, the world chess championship will kick-off in Moscow between incumbent world champion Viswanathan Anand and Boris Gelfand (Israel), winner of the Candidates Tournament. The tournament will be held at the Tretyakov Gallery, the celebrated museum of Russian art, which will be hosting a chess championship for the first time.

Anand has been the world champion since 2007, and this will be his third defence of the title. But his recent performance has dipped his ranking to the number 4 in the World Chess Federation’s rankings. Gelfand, who won the right to challenge Anand in the Candidates’ Matches last year, is out of the top 20 entirely. (He is No. 22.)

It is “the first time in the modern world chess championships’ history that the match between the legitimate champion and a legitimate candidate won’t be a fight for the title of the strongest chess player in the world,” Garry Kasparov, the former champion, told 64 Chess Review.

A tryst with old masters: A treasure house of celebrated Russian art

The Tretyakov Gallery is one of the world’s biggest art museums, a treasure house of Russian art. It was founded in 1856 by Pavel Tretyakov, a wealthy merchant who presented it to the city of Moscow in 1892. The gallery is also an important research centre, where exhibits are restored, examined and popularised. Currently, the museum has over 170,000 items created between the 11th and the 21st century, including masterpieces, which are revered internationally. The chess tournament will be held in the Tretyakov Gallery’s Engineering Building. The building has three floors. The first and second floors are used for exhibiting classical and contemporary art. Under the Golden Map of Russia project, the country’s best regional museum collections are exhibited in this building. The adjacent main building holds regular exhibitions as a part of the programme “The Tretyakov Gallery opens its reserves”, featuring works by Viktor Vasnetsov, Valentin Serov and other Russian artists.

Twelve games will be played, plus a tie-breaker, if needed. The player who will score 6.5 first will be the winner. The opening ceremony will be held on May 10 and the next day, the contenders will play with one day-off after every two games. An additional day-off is envisaged before the 12th game. The players will have 120 minutes for the first 40 moves, 60 minutes for the next 20 moves, and then 15 minutes to finish the game, plus an additional 30 seconds for each move starting from the 61st. Initially, the International Chess Federation (FIDE) proposed that London host the tournament, but the British capital withdrew its bid after encountering a slew of organisational problems. Later, a tender was announced.

The initiative behind Russia’s bid and the idea of holding the tournament at the Gallery came from 41-year-old businessman Andrei Filatov, who is co-owner, board director and executive director of the N-Trans infrastructure group, a leading private operator in the transportation services markets in Russia and the CIS.

Chess is more than a hobby for Filatov, who also loves classical painting. He finished a sports school in Dnepropetrovsk as Candidate Master of Sport of the USSR in chess and, in the late 1980s–early 1990s, was a student at the Sport Academy in Minsk where he met and became friends with Boris Gelfand.

The tycoon is not a public figure; his name rarely appears in the Russian media; nor is he linked with chess circles. Filatov himself admitted that he had seen FIDE President Kirsan Ilyumzhinov on just a few occasions. Filatov’s decision to sponsor the tournament (with a prize fund of $2.55 million) was largely prompted by his desire to support his friend Boris Gelfand and promote the Russian art. The billionaire has a reputation as a chess sponsor; recently, he paid for restoration of the tombstone of the celebrated Russian chess champion Alexander Alekhine, who is buried in Paris. Even so, a few people in Russia know about the renovated tomb.

Moscow beat Anand’s native Chennai in the tender. FIDE announced the tender results in August last year. The plan was to hold the tournament at the Skolkovo innovation centre (Russia’s Silicon Valley) outside Moscow, but later, the Tretyakov Gallery idea popped up. On February 20 this year, the Russian Chess Federation and the museum’s administration signed a contract on holding the tournament.

“The union of chess and culture is a good example to follow; we are launching a good tradition,” says Arkady Dvorkovich, head of the Supervisory Council of the Russian Chess Federation and an aide to the president of Russia. “A chess world championship at the Tretyakov Gallery will be a good opportunity to popularise Russian art and stimulate public interest in chess as an educational method for our younger generation,” says Filatov’s business partner Gennady Timchenko, who is co-sponsoring the event.

Ex-world champion Vladimir Kramnik is upbeat. “In 2008, I played against Anand at a big exhibition centre in Bonn. There are always a lot of exhibitions there, many interested and cultured people. It is a perfect venue! Andrei Filatov’s idea is very logical: most of our fans are from the world of culture. All these areas are interrelated: painting, music, chess and science. Take any chess fan, and he’ll be either a doctor of sciences or a musician. It is obvious that holding a tournament in a big, world-standard museum is an important advantage for chess.”

During the Anand-Gelfand competition, many other tournaments will also be held in Moscow involving chess legends. The Russian Chess Federation, in collaboration with the Tretyakov Gallery, has prepared a programme for young players, who will come to Moscow from all over Russia. It includes chess workshops and multi-board games with famous grand masters, along with museum tours and lectures on the history of art.
The tournament games will be broadcast live online. The English language broadcast will inform viewers about the Gallery’s history and Russian painters. The games will start at 3 p.m. Moscow time. Admission for spectators will be free but limited. The museum buildings on Lavrushinsky Pereulok are open from 10.00 a.m. to 7.30 p.m., with admission until one hour before closure. Tickets cost 360 roubles ($12).