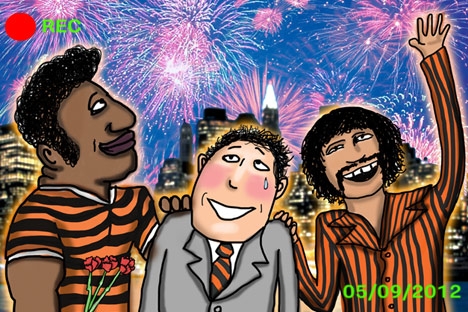 A couple of hours for Victory Day is not a high price to pay for reminding ourselves that the history of mankind doesn’t split along national borders or generational lines.

As someone who moved from Russia to the United States as an adult, I know firsthand the difficulties of adapting to life in foreign country. A new language, new culture, new rules of interpersonal relations, new climate and new food all dawn upon you at once.

An intrinsic, if not fully appreciated, part of the adaptation process is getting used to a new set of holidays. This isn’t as trivial as it might seem: the order of American holidays often challenges the biological clock set up back in Russia. Additionally, the meaning of some of them is not always obvious to a newcomer. Eventually you settle, of course. First, you stop celebrating the official Russian holidays you remember from childhood: the Day of the October Revolution on Nov. 7 and the Day of International Solidarity of Workers on May 1. In the United States, Independence Day on July 4 becomes a proxy for both. Then you stop buying flowers for your wife on March 8 (International Women’s Day), although mandatory attendance at an expensive restaurant on Valentine’s Day may not appear to you to be a sensible replacement. Over time, New Year’s Day, the most cherished holiday in Russia, turns into an extension of Christmas. Finally, you realize that Thanksgiving, a day you never heard of before moving to the U.S. — has gradually become your favorite holiday.

There is, however, a Russian holiday that will always find place on my busy calendar. It’s May 9 — Victory Day, the day commemorating the end of World War II, known by Russians as the Great Patriotic War. I belong to the first postwar generation. As a result, my memory of the war can only be called historic, derived as it was from reading books and watching movies about this part of Russia’s tragic and glorious past. But although I have no memories of the fighting or the deprivations of the war years, I have plenty of my own memories of the annual military parades that take place every year on this day in Moscow’s Red Square. As a boy, I spent the morning sitting in front of a TV set, afraid to miss a blink. And then, there were war veterans filling the streets in the afternoon, their clothes shining with the gold and silver of military decorations. They looked so old to me back then; today, I realize that many of them were younger than I am now.

These days, my 87-year-old mother helps my wife and me remember and celebrate this day. Every year on May 9, the three of us have a celebration dinner. We eat Russian food, drink vodka and listen to my mom’s stories of life during the war. My wife and I already know all of them by heart, so we can always add an important detail that Mom has forgotten since last time. A year ago, she reminded us how one night in February 1943, she was chased by a stranger who apparently wanted to rob her of bread stamps she just received. Without looking back or even screaming, Mom made the run of her life, knowing that should she lose this race, her parents and two sisters would have no bread for the rest of the month. Before dinner is over, Mom always tells my favorite story: how she learned that the war was over. She remembers exactly the time of the day and the street in Vladivostok she was on when she heard the radio announcement by the legendary Yuri Levitan.

Sometimes, we’re joined for dinner by our grown-up, perfectly American children. They are not expected to share the emotional atmosphere of the occasion; sitting around the table and politely listening to the conversation is all that is expected from them. As parents, we take pride in the fact that in contrast to many of their friends — and, I suspect, some U.S. politicians — our kids at least know that in World War II, the United States and Russia were allies, not foes.

This year, Victory Day falls on a weekday, so our kids are unlikely to visit us. I wish they could. A couple of hours every year is not a high price to pay for reminding ourselves that the history of mankind doesn’t split along national borders or generational lines. It’s our common history. And the victory we are to celebrate on May 9 is not only victory for us and our parents; it’s also victory for our children and their future children, too.

For our Victory Day and yours! Cheers!