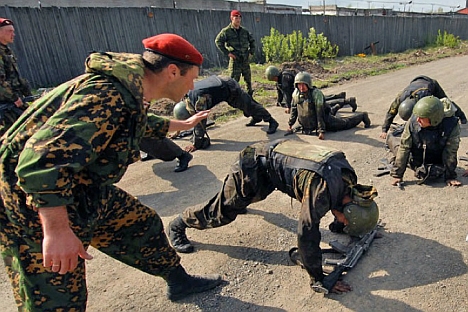 The Russian special forces must survive one of the world’s most difficult competitions to earn the right to wear the crimson beret, the symbol of their status.

The idea of having to pass a special exam that would entitle soldiers to wear the crimson beret originated with Sergei Lysyuk, a former commander of the elite Vityaz special forces unit of the MVD and a Hero of the Russian Federation. "It all started when I read the book “Alpha Team” by Miklós Szabó, a former U.S. special forces soldier," said Lysyuk. "There, the right to wear the green beret was earned by a grueling test, with blood and sweat. The book made a very strong impression on me and led me to think of establishing a test for my division, for the right to wear a crimson beret that was not simply a hat, but became a symbol of a highly qualified spetsnaz commando."

Lysyuk and his friend Viktor Putilov worked out the conditions for testing, including special physical and tactical training. The program has been used since May 31, 1993 in all the spetsnaz units of the Interior Ministry troops.

The Russian competition for the crimson beret usually consists of three steps:

The first is intended to demonstrate physical fitness: a rugged five-mile cross-country race including a final 100-yard sprint. Most of the race course involves overcoming water obstacles – including chest-high swamps of rotting, stagnant water – or forced crossing of a "contaminated" area wearing a gas mask. The cross-country course is full of special obstacles such as minefields, smoke-filled areas and fires. Periodically, a soldier has to crawl under or run through live small-arms fire. Furthermore, a special "psychological manipulation" group is deployed throughout the course. These "psychos" run alongside the soldiers and shout at them, splash them with mud and water and throw smoke-puff charges under their feet. After completing this part of the course, the soldier has to run a sprint: 100 yards, four times. Then come chin-ups and acrobatics.

The second stage begins immediately after the first. Each contestant must show superb skills in firing the RPG-7 anti-tank grenade launcher, the AGS-17 automatic grenade launcher, PK or PKT machine guns, the AK74M automatic, Makarov or Stechkin pistols and the SVD sniper rifle.

The third stage lasts only 12 minutes, but the soldiers often call it "12 minutes of hell." The 12 minutes are divided into four three-minute periods. Each of the four periods is a round of hand-to-hand combat with a new opponent who already wears the crimson beret.

Those who pass all the stages are awarded the crimson beret. The Crimson Beret Council, which exists in every major spetsnaz division, can deprive a soldier of the right to wear the crimson beret for certain offenses. The OMON Berkut in Ukraine and special forces units in Belarus also use the crimson beret test.