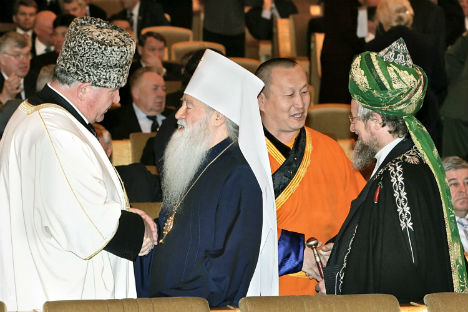 Putin can face similar challenges as faced by India's Prime Minister Manmohan Singh over the issue of National Counter-Terrorism Centre.

In March 1992, in the presidential tenure of Boris Yeltsin, the Federation Treaty was signed by most of the constituent regions of the country. In spite of changes in the political and economic scenario in the Kremlin, the regions mostly retained the old Soviet system of administration headed by the former Communist fiefs backed by the opposing Supreme Soviet (parliament).

Outwardly, the new parliamentary system introduced by Yeltsin in 1993 bore some resemblance to the Indian system, with the State Duma playing the role of Lok Sabha and the Federation Council playing the role of Rajya Sabha. By the time Putin became president in May 2000, the situation in the Russian Federation was somewhat similar to post-independence India, when Home Minister Sardar Patel managed the creation of the Union of India by integrating princely states into a new national identity. The ethnic republics and regions of Russia had de facto turned into fiefdoms, with little or no respect for the federal constitution and civil rights and liberties. To assert Moscow’s power, 83 regions of Russia were divided into seven Federal Districts headed by plenipotentiary representatives of the federal to oversee the uniformity of local laws and their compliance with the Federal Constitution.

A major blow to the power of elected governors was the change of rules for the membership of Federation Council. The governors were to vacate their seats in the Upper House to their appointed representatives, depriving them of their parliamentary immunity.

In order to streamline the Centre-State relations, Putin by his decree of September 1, 2000 also set up the State Council of the Russian Federation, an advisory body comprising heads of the regions. The State Council in Russia plays a role similar to the Chief Minister’s Conferences to discuss issues of national (federal) interests. In the wake of Beslan school hostage crisis of September 2004, Putin abolished the direct elections of the governors of the regions and presidents of ethnic republics and reserved the right to sack regional heads and dissolve regional legislatures.

The country-wide protests over the alleged vote fraud in the wake of the State Duma elections of December 2011 has forced the Kremlin to give up the so-called ‘managed’ democracy and introduce electoral reforms.

The younger generation, which thrived on the stability and petrodollar prosperity of Putin’s earlier innings, is now demanding sweeping political reforms as the place of political parties was taken up by corrupt and inefficient bureaucrats. Electoral reforms proposed by Dmitry Medvedev, the outgoing president, are now expected to give a spurt to political life.

Today, the Federal Centre always has its own way, but eventually Putin could face similar challenges to his authority as faced by Indian Prime Minister Manmohan Singh on the issue of the National Counter Terrorism Centre (NCTC). After stiff resistance by several chief ministers over the controversial powers of NCTC to carry out search and arrests in the states, the Centre has indicated its readiness to climb down. A similar situation exists in the militancy-infested North Caucasus, where many are unhappy over counter-terror efforts of the federal security agencies.

The vote in the UN Human Rights Council by India against Sri Lanka was reportedly under the pressure of Tamil Nadu Chief Minister J. Jayalalithaa. After initial opposition, she has now allowed commissioning of Russian-built Kudankulam Nuclear Power Plant in her state in spite of protests by locals. These examples show that in a federal state the central government would have to be flexible.

The Indian federal system was created on what was left after the colonial authorities and the merger of princely states in the Union of India. The Russian Federation was created on the ruins of the USSR, but on a strong industrial and scientific structure.

In spite of their peculiarities India and Russia are home to diverse multi-ethnic, multi-lingual and multi-religious societies. They can and must learn from each other in fortifying their federal system for the benefit of each and every citizen living in any part of the country. This is a very sensitive issue, especially for ethnic minorities, who have no other home except their country, be it India or Russia.