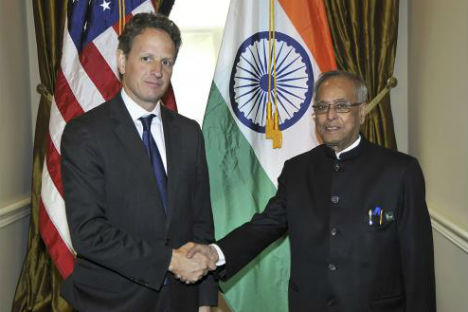 Finance Minister Pranab Mukherjee with US Secretary of the Treasury Tim Geithner in Washington, DC on April 19, 2012. Source:US Department of Treasury

The forthcoming session of the US-India Strategic Dialogue next month has a dense agenda. It tend to take strategic partnership of two countries to a new level.

The Indian commentators explored half a dozen ill-lit avenues at least to find a credible explanation for the sudden decision by the United States Secretary of State Hillary Clinton to visit India at this juncture. On the face of it, the visit appeared superfluous, sandwiched between an exhaustive round of consultations in Washington by the Indian Finance Minister Pranab Mukherjee only last month and the forthcoming session of the US-India Strategic Dialogue next month in the US capital.

Indeed, the US Undersecretary of State for Political Affairs Wendy Sherman too recently visited New Delhi to prepare the agenda for the Strategic Dialogue in June, which will be co-chaired by Clinton and her Indian counterpart S. M. Krishna. What then explains the visit?

Of course, there is no dearth of ‘talking points’. The ever-green topic of Iran; the bleeding wound of Afghanistan; the ‘failing state’ called Pakistan; the unfulfilled promise of the US-India civil nuclear agreement; the wonder that is China; the moribund reform program in India; US’ gargantuan appetite for the Indian market – indeed, US-Indian partnership has a dense agenda. But things still did not add up.

Clinton’s Asian itinerary originally consisted of a visit to Beijing to co-chair the US-China strategic economic dialogue, which was scheduled well in advance. However, Washington belatedly proposed to Dhaka a weekend visit by Clinton on her return trip from Beijing, and then added on a detour via New Delhi with an overnight halt at Kolkata thrown in.

In the event, the South Asian itinerary dovetailed into two major developments on the diplomatic chessboard – Clinton’s visit to Myanmar in December, which introduced a new salient to the US-China rivalry, and, secondly, the conclusion of the US-Afghan strategic pact, which paves the way for long-term American military presence in Central Asia. Simply put, Clinton launched an ambitious enterprise aimed at bringing India, Bangladesh and Myanmar together as an arc of ‘US-friendly’ countries in the southern tier of China.

While in Dhaka, Clinton formalized a US-Bangladesh Partnership Dialogue at the level of the Under Secretary of State, which will be held annually in Washington and Dhaka. Clinton affirmed US’ interest to “maximize” the bilateral cooperation. She spelt out the US perspective: “Bangladesh is ideally geographically situated to serve as a land bridge for trade between the dynamic Asia-Pacific region and the huge economic potential of South Asia. And we are pleased to see the reforms occurring in Burma [Myanmar], because that also holds great benefits… for its neighbor, Bangladesh.” Clinton harped on Bangladesh’s “outreach” to Myanmar and India.

Clinton encouraged Dhaka to harmonize with India’s so-called ‘Look East’ policy and to strengthen its ties with Myanmar. Of course, the unspoken word in all this was ‘China’. Clinton’s halt in Kolkata was an extension of her trip to Dhaka. She urged that India should quickly resolve the Teesta River dispute with Dhaka lest it would “cause all kinds of dislocation the needs to be headed off.” She underscored the great potential for Kolkata to revive to its past glory as the entrepot to the East. The brilliance of Clinton’s strategy is that she could freely proffer advice, but at no cost to the US either.

Clearly, the US hopes to insert itself into the Bangladesh-Myanmar and India-Bangladesh relationships and derive synergy, taking advantage of the progress the 3 countries have made lately in resolving their seemingly intractable disputes. Having said that, the US’ geo-strategy suits all the three regional protagonists as well. For India, any US help in smoothening the rough edges of its relationship with Bangladesh is welcome; for Dhaka, US’ intervention may help push New Delhi to move faster to reach an accord over Teesta. For both, the opening up of Myanmar under US watch provides a window of opportunity to establish connectivity with the dynamic ASEAN region. From the US perspective, huge business opportunities may open up in the Bay of Bengal and in all the three countries. The US-Indian axis also gains in the process by containing China’s presence in the Bay of Bengal.

Curiously, Clinton repeatedly commended the Indian government for being part of what she called the “international consensus” on pressuring Iran. In essence, she disclosed that while the Indian government publically professes disdain toward the US sanctions against Iran, it has dutifully fallen in line with the US demand to cut back on in its oil purchases from Iran.

What emerges is a curious US-Indian symphony over the Iran issue. India is cutting back on oil imports from Iran and is diversifying its oil purchases, which pleases Washington (and the powerful Israeli lobby in the US). But this helps the US to avoid imposing sanctions on India in July. Surely, New Delhi expects Washington to reciprocate its decision to reduce oil purchases from Iran.

On the other hand, India has leveraged Iran’s isolation to its advantage to convert almost half of its oil imports from Iran into barter trade and to compel Iran to step up its imports from India, thus balancing the bilateral trade which was heavily tilted in Iran’s favor. Equally, New Delhi hopes that Tehran will remain grateful too, since India still figures as a major purchaser of its oil.

Besides, Indian rhetoric continues to uphold Iran’s right to pursue a nuclear program as an NPT member country and to oppose any use of force to resolve the Iran nuclear issue. That would be music to Iranian ears. In short, New Delhi is well-placed to have trade-offs with both Washington and Tehran depending on the outcome of the talks between P5+1 and Iran and the fate of the US-Iran standoff.

The most substantial part of Clinton’s talks in New Delhi related to the efforts of the US nuclear industry to secure tens of billions of dollars worth business in the Indian market. Clinton obtained assurances that the US companies will be provided a “level playing field”, which, translated into plain language, would amount to the Indian government finding a way to overcome the US reservations regarding India’s nuclear liability law.

The Westinghouse is reportedly making headway in the negotiations over the sale of nuclear reactors to India. Clinton complained that the US’ competitors (read Russia) had an undue advantage since they enjoyed state support. How New Delhi proposes to create a “level playing field” for Westinghouse vis-à-vis Rosatom remains a point of interest.

Indeed, it will now be for New Delhi to leverage Westinghouse’s multi-billion dollar worth nuclear business in the Indian market to press Washington to expedite India’s membership of the international technology control regimes, which would enable India to access advanced ‘dual-use’ western technology.

Coincidence or not, even as Clinton was departing from New Delhi, Indian government announced its deferment of the proposed General Anti-Avoidance Rules [GAAR] and to dilute many of its provisions. Washington has been lobbying hard for such a decision. The GAAR was meant to strengthen India’s tax laws to prevent foreign investors from avoiding paying taxes on capital gains in India.

Clinton listed 4 “key lines of actions” as the agenda of her discussion with the Indian leadership – expanding the economic ties as “one of the world’s largest trading relationships”; deepening of security cooperation; working together in South and Central Asia; and, promoting a “shared vision for the Asia Pacific.” How the two countries leverage their partnership to mutual benefit while working in these key areas will become clear at the forthcoming Strategic Dialogue is about. Clinton has gone back from New Delhi with a clear understanding of the high Indian expectations.

Krishna, while taking stock of Clinton’s visit, anticipated that the upcoming Strategic Dialogue in Washington next month will be “productive” and will also “outline how we intend to take our strategic partnership to a new level.” Krishna pitched really high, when he said in the presence of Clinton at their joint press conference on Tuesday: “The emerging global trends only reinforce our shared conviction in the importance of this [India-US] relationship for the future of our two countries and the shape of the world in this century.”