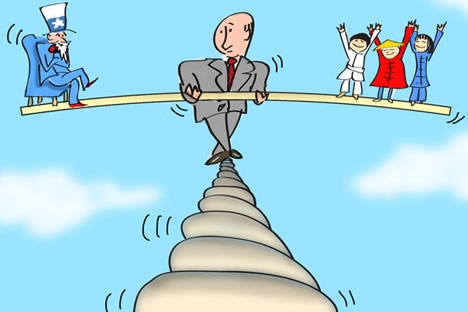 There are few statesmen in the world today who can claim to be themselves a brand. Vladimir Putin is one of them.

Russia’s President Vladimir Putin has had his hat in the political arena for almost 13 years now, during which time he has become not just a symbol of his country, but the personification of a certain type of politics. This is a product of an era of transition, both in Russia and in the world – a period when the political system of coordinates is in flux everywhere, traditional ideologies have been shaken, borders have become porous and blurred while new and puzzling dividing lines are emerging.

Against this backdrop of moral relativism, conceptual incoherence, mixture genres – such as “humanitarian intervention” – and general uncertainty about the future, there is a need for strong leaders who are capable of pursuing their course and casting aside traditional constraints. This is practically impossible in a developed democracy, although it has become almost commonplace to speak about destructive inefficiency of this form of government in times of severe crisis. But societies in transition can afford it: the institutions that limit personal rule have not yet taken hold and popular belief in quick fixes is strong.

If such a leader appears in a small country that depends on external circumstances, he tends to become an outcast (such is the situation in Belarus) or, at best, an enfant terrible (like in Hungary). When it happens in a huge, powerful country with vast natural resources and nuclear potential that by definition plays a leading role in world politics, it can claim to offer an alternative model. Putin is an ideal embodiment of such a model.

Putin as leader is perceived in the world as a stronger and more influential factor than the country he leads. While Russia is widely perceived in the West as a shrinking “petro-state” and a declining kleptocracy, the country’s leader is not in the same category as Mobutu Sese Seko of the Democratic Republic of Congo or Zimbabwe’s Robert Mugabe, much as the Russian opposition would like it to be the case.

He is thought to be a wily, sophisticated and therefore doubly dangerous player who successfully achieves his goals. The demonization of Putin in the Western media and public opinion is the flip side of the fascination with his personality. The reason is that Vladimir Putin is doing what Western leaders cannot afford to do because of to the above-mentioned institutional constraints.

Putin makes no bones about being anti-ideological, which enables him to make abrupt turns in policy when necessary and to use any rhetoric to further his ends. He has no use for political correctness, which enables him to formulate some priorities without mincing his words. His preoccupation with national sovereignty gives him a lot of leeway in the big game: Russia is one of the few countries not bound by commitments within any alliance and thus has a free hand, while being strong enough to translate that freedom into reality. He is guided by the principles of Realpolitik, which is based on the balance of forces in which potentials – and not intentions – count while prestige is a material concept. The approach is often criticized as being old-fashioned, but it is clear and understandable.

Finally (and perhaps most importantly), Putin is (or is thought to be) the undisputed master of his land who can do whatever he likes with it.

All (or most of these things) are unattainable for Western leaders who are hamstrung by ideology (values approach), allied commitments (NATO) and the need to package their intentions in such a thick shell of propaganda that they themselves come to believe in the packaging and confuse it with their true goals. And they depend heavily on public opinion, their constituencies and interest groups.

Putin has another side to him that appeals not to the West, but to the East. He is seen as a leader who can stand up to American hegemony and promote a multi-polar world. That view is based not on objective reality (in practice, Russia for many reasons cannot afford a confrontation with the United States), but on his willpower and an effective communications strategy. That is why the former Third World, including China and India, still see Moscow as a counterweight to Washington even though Beijing, for example, could perform that function much more credibly.

Putin’s perverse kind of popularity in the world is a sign of confusion in people’s minds. It is a mixture of fear of a person who is able to act meaningfully in the midst of chaos and a sneaking hope that this type of alpha male can untangle the confused situation. Will Vladimir Putin be able to preserve this image and, consequently, his weight in world politics during his third presidential term? The paradox is that, to do so, he must maintain an even and balanced level of authoritarianism. Any tilt would destroy the balanced picture. But the political atmosphere in Russia is changing, and Putin will have to react to these changes and probably lean to one side or the other.

A further shift in the direction of Belarus’ Alexander Lukashenko would make Putin a run-of-the-mill autocrat, and there have been many of those, who inevitably get out of touch with reality and lose power. Liberalization would remove the allure of a powerful leader who controls all the internal processes and with whom all deals and agreements should be made. Walking on the razor’s edge is difficult. If Putin makes a misstep, there will be no lack of critics both inside and outside the country who would be only too glad to nudge him off the tightrope.

The original Russian version of this comment is published at gazeta.ru.