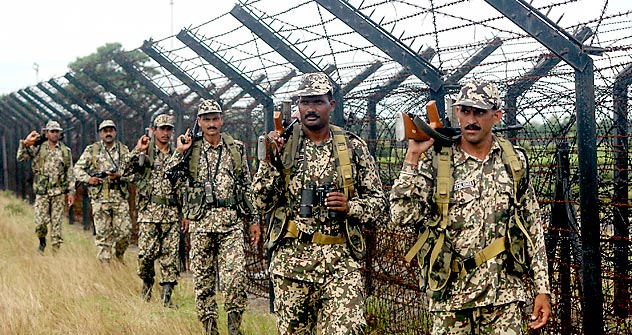 The colonial policy of divide and rule has led to creating rigid borders in South Asia. But in an increasingly globalised world making borders flexible is a key to successful regional integration.

Most of the borders in South Asia are creations of the colonial history, and as the developments of recent past indicate the countries of the region are increasingly realising the futility of these rigid borders and have taken steps forward to convert these rigid lines of separation into lines of contact, communication and cooperation. The plan of India and Bangladesh to open ‘border haats,’ a novel phrase implying opening markets in border areas, or making borders flexible between India and Pakistan particularly in Kashmir, or the already existent flexible borders between India and Nepal, and India and Bangladesh, and the dramatic rise of trade between India and Sri Lanka, have not only strengthened prospects of regional integration in South Asia, but also eventual irrelevance of borders in South Asia in long term.

While speaking at the conclusion of the first meeting of the India-Bangladesh Joint Consultative Commission on 7 May 2012, India’s External Affairs Minister, S. M. Krishna revealed that both the countries are planning to open borders at four border points to commence border markets India and Bangladesh moved faster to strengthen bilateral economic relations. The markets will be opened at Raghna and Kamalpur in northern Tripura, Kasba in western Tripura and Srinagar in southern Tripura. A senior official stated,  “The border haats would be allowed to sell local agricultural and horticultural products, spices, minor forest products (excluding timber), fresh and dry fish, dairy and poultry products, cottage industry items, wooden furniture, handloom and handicraft items.” Interesting here to emphasize is that the West Bengal state of India and Bangladesh (formerly East Bengal of Pakistan) have enjoyed since centuries an integrated socio-cultural identity. Rabindranath Tagore, the world renowned Nobel laureate poet, is well known and valued in both the countries. To further cement the growing bilateral relations, both the countries jointly arranged programmes for the celebrations of 150th birth anniversary of the poet. Tagore wrote national anthem for both the countries. While concluding the yearlong celebrations India’s Finance Minister Pranab Mukherjee and Bangladesh’s Prime Minister Sheikh Hasina pledged to take forward the relations. Mukherjee observed that the goodwill generated during the celebrations “can be used to build on and expand areas of interests between the two nations.”

If one looks at the history of South Asia, of which Indian subcontinent is a major part, one can come across myriad evidences and myriad narratives how the whole region was enjoying an integrated socio-cultural identity since centuries. What India’s first Prime Minister, Jawaharlal Nehru coined in the context of multi-ethic and pluralistic culture of India as symbolizing ‘unity in diversity’ can perhaps be applied to whole South Asia. This synthesis across geographical diversities could be possible due to mixture of races, the invasions (for instance, the famous Mughal rule in India was established by Babur, originally from Central Asia), the cross-cultural exchanges and trade through the famed Silk Route, the influences of religions of Hinduism, Buddhism and Islam had made the whole South Asia a cross hybrid of culture, which was highly tolerant, peaceful and eclectic. In fact, there are numerous instances in which religious differences were transcended by human passions of love, cooperation and peaceful existence. The famous Saint of Kashmir, Nuruddin (Muslim name) had also a Hindu name (Nuruddin). This religious tolerance was best reflected in Sufi preaching and Saints, who were equally popular and revered across religious divides.

The colonial policy of divide and rule, and also the mutual suspicions among religions partly fermented by colonial policies provided a severed jolt, or almost shattered this integrated personality of South Asia. This shattering or fault line was most clearly visible in case of India and Pakistan, where the Radcliff line created two new dominions, who since then remained almost in a state of constant war, with contentious issues like Kashmir showing no signs of wearing out. The borders grew rigid and inflexible with the passing of years. Not only that, the borders shattered the culture of the people, and divided families and their values, and also scuttled the earlier existent social and economic connections. However, the trend of past one decade has shown signs of optimism, as the leaders of India and Pakistan have realised the futility of violence, and the values of peace and cooperation. The onset of globalisation, which emphasised on increasing intermingling and cooperation across borders, and also developments like collapse of the Berlin wall, set the trend for immateriality of borders and the realist paradigm governing interstate relations. The past decade, particularly in the context of India, is highly instructive in this context as both the countries agreed to open border in Kashmir at two points, Srinagar-Muzaffarabad and Poonch-Rawalakote, in a move to make border flexible and bring back to the people the sense of empowerment. This turn in the policies of both the countries not only dawned peace in the region, despite temporary setbacks, but also have led local people to demand to make the whole border flexible and open.

Such a wider approach for peace and development can wean away much of the ill will and animosity generated since the past decades. The experience of opening routes in Kashmir is already positive, and this can be replicated in other areas. The opening of borders between India and Bangladesh too will accrue positive benefits and will gradually help develop better understanding towards full-fledged cooperation in all areas, including in the areas of energy, transport corridor and water management. There is a huge Bangladesh population in India, and they can play an active role in this trade and commerce ventures. India-Nepal border is already flexible, and there is large population of Indian origin in Nepal particularly from the areas of Uttarakhand and Bihar. Whether it is the religious connections of Hinduism and Buddhism (Buddha was born in Nepal but died in India), or the negative connection of Maoist violence, India and Nepal have a lot of common areas to work together. In the context of Bhutan, India has played an active role to boost its economy by investing in the region and by contributing to its national budget. The same flexibility too has applied to Sri Lanka. Since last year, the bilateral trade has registered a growth of 65%.

It is true that neither the old mentality of colonial domination, nor the policy of coercion or intimidation, will work in an increasingly globalised world towards regional integration in South Asia. The framework of cooperation must be based on the quintessential principles of friendship, cooperation, peaceful coexistence and mutual benefit. It must be a relationship between equals, not between senior and junior, nor between big brother and small brother. Bodies like SAARC failed due to these obstructions, and also due to mutual distrust and hatred between India and Pakistan. While regions like Europe and South East Asia have moved forward to make relations deep and highly successful, South Asia has lagged far behind. It is time that South Asia with its high cultural capital must make moves towards long lasting regional cooperation and integration. In this venture India must take the lead.