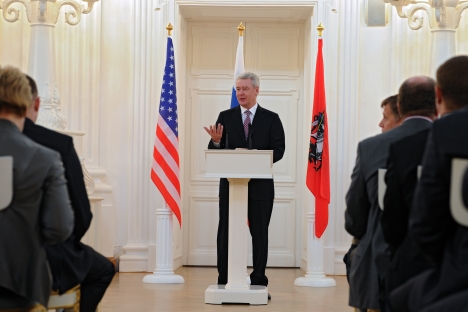 Moscow Mayor Sergei Sobyanin met with representatives of the American Chamber of Commerce in Russia at a historic palace in Moscow. Source: Kommersant

Moscow Mayor Sergei Sobyanin reached out to American businesspeople at a one-of-a-kind event he promised to repeat in the future.

Last month Moscow Mayor Sergei Sobyanin impressed members of the American Chamber of Commerce (AmCham) with an offer of cooperation at a meeting in a former imperial palace, an event that some of those in attendance described as unique.

Sobyanin proposed creating a working group in which city officials would consult with  AmCham about some economic measures. The mayor also highlighted other areas of mutual interest.

“This is the first meeting with a business focus that AmCham has had with a Moscow mayor this century,” said AmCham President Andrew Somers afterward. “It can lead to productive contributions by American businesses. It’s a unique event. Now we feel welcome.”

Sobyanin, a former chief of staff in Prime Minister Vladimir Putin’s cabinet, took charge of City Hall at the end of 2010. His predecessor, Yury Luzhkov, had previously spoken only at a ceremonial event with AmCham.

Undeterred by the heavy security, guests packed most of the 138 ornate gray-blue cushioned chairs in the domed second-floor hall of the mansion near the Dinamo metro station. They were there to learn one thing: How open Sobyanin is to foreign investors.

Paul Kiesler, PepsiCo’s general manager in Russia and one of the business leaders present in the hall, was upbeat about the interaction.

“What’s great about today is that it’s a demonstration of this administration’s commitment to work with industry to build a vibrant economic environment in Moscow,” he said. “I have been here for 20 years. It’s one of the first times that the city administration really opened up and invited businesses to participate in decision-making.”

AmCham initially invited Sobyanin to speak to the group at a five-star hotel, but the mayor then offered to host the meeting at the recently renovated Petrovsky Palace on Leningradsky Prospekt, according to Somers. Built at the end of the 18th century on orders of Catherine the Great, the palace briefly housed Napoleon’s general headquarters before the emperor fled Moscow in 1812. An imposing structure despite its modest proportions, the building now hosts City Hall receptions.

Opening the event, which included U.S. Ambassador Michael McFaul as a guest, Sobyanin stated that his administration has improved the conditions for doing business in the city. 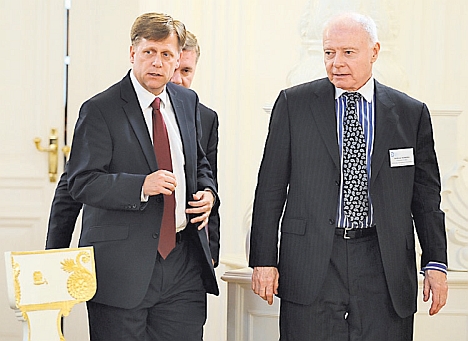 “It seems to me that it has become easier to make investments in Moscow compared to what was two or three years ago,” he said.

Sobyanin then made the proposal about consulting with AmCham on key decisions that could affect foreign businesses. In another idea, he said City Hall could send public tender invitations to foreign companies directly because it is often difficult for them to navigate the bidding terms and procedures. The measure would cut out the middlemen and broaden competition, Sobyanin said.

He pointed out that the city hired foreign consultants McKenzie & Company and Boston Consulting Group to help develop a transportation strategy and said there were opportunities for foreign architects in the planned expansion of the city.

Executives of four U.S. companies — Abbott Laboratories, PepsiCo, Hines and John Deere — followed with presentations about their business in Russia and calls for more transparency and clarity about bidding for city contracts and greater involvement in decision-making.

Sobyanin took three questions from the business leaders. In answering one of them, he said the city selected several former school buildings to offer as premises for any investor that would want to set them up as schools for the children of foreign executives or diplomats.

Somers said City Hall has been helpful in other ways. He accepted the invitation to sit on a committee that began work in February to defend the rights of business people and said there had been practical follow-up from his involvement, including meetings he was able to arrange for AmCham members with city officials. “It’s not just talk,” Somers said.

But Sobyanin has not managed to shake some of the trappings of his past, including an apparent dislike for the media. Journalists at the event were shepherded off to a first-floor room of the mansion, where they watched the speech on television.