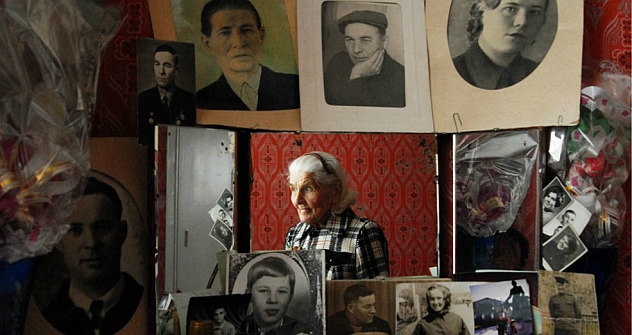 As Russia celebrates the 67th anniversary of the Soviet Union’s victory over Nazi Germany, Russia & India Report spoke to veterans about their memories of that time.

“I think I’ve stayed alive to retain the war in my memory,” said Nina Novgorodova.

When these veterans were at war, they were 17, or 19 or 21 years old. The war came for them during that period of their lives when people fall in love and make plans for the future. But for them, the burden of wartime forced them to grow up quickly. By their mid-20s, they were becoming experienced and worldly-wise, commanding soldiers or receiving decorations.

Today, despite their age and poor health they visit schools and colleges and speak at institutes. The audience listens to them as if charmed, accompanies them to the station in a crowd and asks them to come again. Their experiences make history more than a line of words in a textbook.

The Germans had a huge airfield near Voronezh. and our aviation at that time, in 1942, was very weak. Every single day there were 20, 25, 30 aircrafts in the sky. They begin at 9 in the morning, sometimes earlier. They would methodically make one, two, three circles, then they would strike the front line. Our task was to pick up the burned and the wounded. Every bombing gave you a feeling that it was the end. Logs, rocks, soil, sometimes even vehicles flew by. It seemed that nothing could escape destruction. But when the first stage of bombing ended, you looked around, began to move and there are wounded and burned people. And this repeated every two to two-and-a-half hours. When you work, you don’t notice any fear. And that was real work. A nurse at the front line was a person with her arms blood-stained up to the very elbows. Battles were fought in both summer and winter. When it was cold, it was much more difficult to bandage the wounded, because a soldier wears an overcoat, a quilted jacket and trousers – we had to rip all that open, to cut it with knives and dress their wounds.

At war I faced some amazing things – the hidden potential of man – for the first time in my life. Perhaps, it is called intuition. I’ll give you an example of it. It was daytime. There was a bombing in progress. The Germans bombed in circles – they’d make a distant circle, then make it closer and closer. It was nearly above our medical and sanitary platoon. To protect ourselves from bombs, we dug trenches in the ground and sat in those trenches during the bombings. So this day, when the aircraft go for another round, some incredible force raised me, I sprung out of the trench and ran like a deer across the clearing. There was a vehicle at the edge of the clearing. I dove under it and lay down. When I felt that the bombing was over. I turned back and saw that the trench has disappeared.

Here is a completely different story. Once we, the nurses, were given American all-weather raincoats. They were very thin, the fabric was good, but we didn’t know how to work with them on. One of us, I don’t know who, had the idea to make dresses out of those raincoats. At the corps headquarters there was a special workshop where they sewed and mended officers’ uniforms.” We went there; the tailors were men only. We took out our raincoats and asked whether they could be turned into dresses. The tailor laughed at first, but then said: “All right”.

We went out of the workshop with new dresses. We came to the village where we stayed. In the evening we put these dresses on, tied our headscarves in various styles. In our sanitary platoon we were often visited by scouts. They used to come to our place after they had come back from their missions, if they had come back. So they came, looked at us and didn’t understand anything. And then they said: “Oh, girls, you are so beautiful!”

At first it was scary. Once I looked at my companion lying nearby and saw that he had been killed. It’s terrible! Then I ceased being frightened. It’s like playing a game. Did you play war in your childhood? The same thing is there. Your heart gets kind of petrified. But, of course, you try to save yourself from a bullet, a shell. You run, entrench yourself with your shovel, hide your head. A shovel is a primary weapon for a soldier. As soon as it gets quiet, if you have time, you entrench yourself. Sometimes you make such a big trench that you can hide there standing straight. Some other time you can only kneel on all fours. Bullets and shells are flying by, but you’ve entrenched yourself. They command: “Go!”, and you abandon everything – they’ve begun an attack. But you mustn’t let your shovel and weapon out of your hands! And keep your machine gun ready. And when you put your machine gun in its place – you get a shield. Though, if an explosive shell falls, it won’t be stopped by this shield. If a German detects you, he has to get rid of this weapon. He shoots with a mortar. The first shot falls short. The second one goes over the target. You must leave the place before the third one – he will shoot right at the place where you are sitting. Once I had to run away, too. A sniper pinpointed me. I just looked out – and there he was for me. I was badly wounded and sent to the hospital.

Once I was at my post at the command dugout. I saw an enemy aircraft approaching and I told that to my chief in the dugout. He asked: “Where from?” I answered: there is a loaded aircraft flying in such and such direction. He answers: “But it is reported to be ours.” I say: “No! It is hostile.” I knew our signals, planes, engines, distance and height. They reported: it is our aircraft coming, but I insisted it was a hostile one! Finally, they destroyed it.

It gave me the shivers afterwards. I was sure I couldn’t be mistaken! We studied the engine noise, and all that stayed in my memory. Anti-aircraft reconnaissance is a complicated thing. Some time later the chief of the regiment headquarters came to our place and asked: “Where is your scout?” I was at my post at that very moment. He said: “Well done, I’ve brought you a commendation.” Later our scout girls wondered how it was possible that the aircraft was so close, but they still couldn’t make out that it was a fascist one.

We came to Nizhny Tagil, got onto the vehicles and went in the direction of Krakow. We had to take one of the cities on our way by storm, to go through it and consolidate a position at the other side, and near a house with a tunnel, a German hit right the side of the tank with a Faustpatrone. The tank caught fire. That meant that you had to run away. The tank commander jumped out, and a sniper killed him. The gun commander followed him, and the same thing happened to him. I was sitting inside the tank. It was hot, the oil was flowing at the bottom, it began to ignite. I opened the hatch a little to get a jolt of fresh air and saw that this German had disappeared; perhaps he thought that he had killed everyone. I opened the hatch wide – nobody is shooting. I jumped out of the hatch quickly and ran into the tunnel. I’m practically unarmed; I have only some German gun, which shoots within the range of 25 meters. I was lying in the tunnel and heard footsteps. I got quiet. I was holding this gun, ready to shoot. The tank is burning and lighting up the corner of the tunnel opposite me. I saw a shadow. A German was coming. When he came close to me, I shot. I took his assault rifle and two magazines; I put them on and became a hero. I went in the direction of our position to catch up with the tanks.

In 2000, in honor of the 60th anniversary of the victory, a delegation of war veterans went to Germany. I was among the delegates. We went everywhere, to burial grounds as well. They look after the graves of our soldiers so well. There are many tombstones with nameplates; all of them are protected by the state. And I noticed no hostility towards us. And I myself felt none as well.

Which day is the most joyful for me? Jan. 27 – the day the Leningrad Blockade was breached. I was a mechanic of Il-2 aircraft at 999 Air Assault Regiment. On Jan.  27, a salute was fired to announce that the blockade of Leningrad was over. The saddest day for me is Dec. 14. That day we were shot down. They made a hole in the glowplug. Oil gushed out. I was in the gunner’s place so I didn’t even have a parachute. I felt something warm flowing down my body. I was wounded, I was losing blood, and I felt giddy. But we managed to land somehow. They took the pilot away and I was taken to the field hospital immediately, they gave some shots to me. They didn’t give me a blood transfusion, though they had to. I stayed in bed for three days and that was all.

You ask me where we get strength now. We love our motherland. We were protecting it. My father was killed near Stalingrad, my uncle was killed. Why did I become a teacher of history after the war? To speak about the victory, heroic deeds, honor and dignity. I explain it to the children: “Our legacy is not houses, cottages or dollars. Our legacy is our own children whom we gave birth to and whom we’ve taught.” Soon we’ll pass away, and that will be the end. Therefore I tell my students again and again: “Soon there will be only one old man with decorations – the last war veteran. Look at them while you still can.”