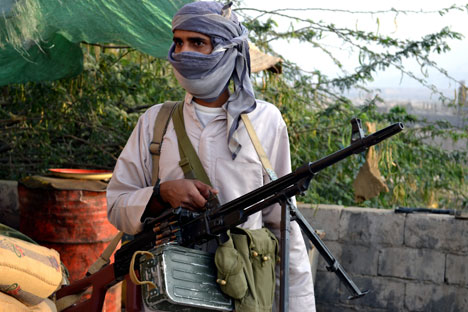 Farman Shinwari, a new head of Pakistan wing of Al Qaeda, engages the attention of all players in the South Asian region including India, Pakistan and Afghanistan.

While the international community is taking stock of the past one year’s developments in the annals of international terrorism and fundamentalism post-bin Laden, an interesting development takes place in Pakistan. A young man of 30 named Farman Shinwari, earlier active commander with Harkat-ul-Mujahideen known for its Kashmir activities, is appointed head of Pakistan wing of Al Qaeda. There is, it seems, a deeper plan to revive the old animosities and hatred in the Indian subcontinent and South Asia to the profit of this radical organization to further its entrenchment in regional politics. As the recently revealed information suggest, Al Qaeda after its post-Laden initial wilderness, has gathered strength and been consolidating its apparatus in the region. That Laden maintained close contacts with Taliban leader Mullah Omar and his deputy Ayman al Zawahiri from his Abbotabad residence, and devised various strategies for global operations did not go in vein; in fact the recent developments in the organization corroborate this view point.

Organizations like Al Qaeda can never remain behind veil. They must carry out their operations and at the same they must remain in news for their fear and intimidation factor. While the operations are conceived and concretized in secret meetings, the video tapes, CDs and phone calls to press to confirm their involvement in an attack gives them wider publicity. Shinwari’s emergence in the Al Qaeda ladder may be linked to this phenomenon. One of his ideological brothers, Baitullah Mehsud the slain former leader of Tehrik e Taliban Pakistan (TTP) symbolized youthful energy in broadening the organization and fomenting violent operations. In one of his noted statements he had assured his support to militancy in Kashmir, and further assured that in case of another war in Kashmir, he would fight against the Indian forces. Farman’s leadership of Pakistani branch of Al Qaeda will further this objective. Three of his brothers Rehmat Nabi, Matiullah and Raziullah were active in Harkat-ul-Ansar in Kashmir during heydays of militancy in 1990s. He was also a leader of this militant organization earlier, and had developed close links with Al Qaeda leaders like Badr Mansoor, who was killed in a US drone attack.

Farman’s native location, his grooming since childhood years in radical ideology, his intimate knowledge of geography and politics of the Pakistan’s federally administered tribal areas makes him suitable candidate for this top post in Al Qaeda. He also comes from a family which is steeped deep in radical ideology. All his brothers are associated with radical movements. The leader of Pakistani Al Qaeda will have immense responsibility in not only reviving and strengthening the organization and its operations, but also to further widen its networks. The organization has to revive militancy in Kashmir, ferment violent attacks in Pakistan (against the civilian government’s anti-radical approaches and policies) and Afghanistan (in order to strengthen the Taliban and its dream to become the ruler of the war torn country). Al Qaeda’s recruitment policy, which seeks educated and computer savvy young people, equally fits to this young cleric from Khyber agency. Shinwari did his BSc and Masters before becoming active in radical activities. He was particularly influenced by his mentor and close associate of bin Laden, Badr Mansoor. It was his close association with Mansoor, and his earlier roles in various capacities particularly in recruiting members to the fold of the TTP and Al Qaeda, and his grip over the local affairs makes Shinwari a much sought after leader in Al Qaeda.

Recently Pakistan allowed the dismantling of the three storied residence in Abbotabad in which bin Laden was staying for about six years. The contractor who won the bid to demolish the house received threats from the Taliban for this act. The broken bricks of the house have been prized and collected by many people in the locality as well as far from flung areas not only as souvenirs but also a kind a holy relic which felt the touch and the presence of the supreme Al Qaeda leader. The point that needs emphasis here is that the popularity of Al Qaeda and the ideas of its slain leader Osama bin Laden still reverberate in the sections of the population in Afghanistan-Pakistan region. It is also true that a significant section of the society has already been radicalized by Al Qaeda and its affiliates like Haqqani network, Taliban of Mullah Omar, TTP, Lashkar-e-Toiba and many well established organizations and many other mushrooming organizations in this poor belt. The revival of these organizations particularly Al Qaeda will depend how far Shinwari capitalizes on this radicalization of the population, and provoke them for more violent activities throughout the region.

Shinwari may also use his expertise and knowledge of Kashmir militant movement to mobilize sections of disgruntled Kashmiri youth to take up guns and challenges the Indian forces in the region. The violent protests in the Kashmir valley in 2010 by the youth might not have been unnoticed by him. The fact remains that the more the violence in Kashmir, the more the advantage to the radical organizations. The more the conflict between India and Pakistan, which is bound to happen if violence is escalated in Kashmir as India suspects Pakistani hand in Kashmir militancy, the more to the advantage of these radical organizations. Of late, after about sixty years of violent conflict, the nuclear powered India and Pakistan have realized the emerging imperatives of the post-cold war world and have sought to cultivate in peaceful bilateral relations than to invest in violence for resolution of contentious issues. The civilian government of Pakistan led by Asif Ali Zardari and the Indian government led by Manmohan Singh appear to have worked out a delicate balance in relations. The emerging Pakistani Al Qaeda under the leadership of Shinwari may strike this balance and aim to promote discord by fomenting violence in Kashmir, particularly by luring the disgruntled elements to the so called jihad.

Undoubtedly it will be an uphill task for Shinwari and his group to achieve so many tasks without necessary support. Hence, in the initial years the grouping may invest in enhancing strength by recruiting more cadres and raising funds. Various devious mechanisms looting and kidnapping for ransom may also rise in coming months. The kidnapping and murder of one Red Cross worker last month is a case in point. How far these mechanisms will actually work will be seen on the ground. Besides, the apparent known face of Pakistani Al Qaeda in the person of Shinwari will concentrate the attention of international forces, including the regional players to target and eliminate him. The newly emerging Shinwari phenomenon will engage the attention of all players in the South Asian region including India, Pakistan and Afghanistan.