Upcoming G8 forum and the objectives behind the looming Great War 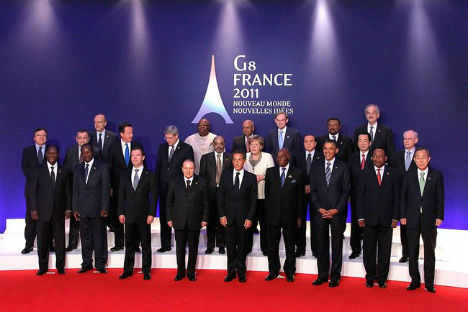 Traditional "family photo" at the G8 summit meeting in Deauville in 2011. Source: en.wikipedia.org

The world is entering a transition epoch, during which a big war over natural resources and spheres of influence, along with series of preceding regional conflicts, become a virtually inescapable.

The dynamics unraveling within the world system and driving deep transformations of the existing centre - semi-periphery - periphery layout is prone with a proliferation of serious armed conflicts.

This big war is looming on the horizon as the US is readying the scene for it in the Middle East. Far too many forces seem convinced that the war has to be the solution of choice to the lingering global crisis. In the meantime, watchers are trying to descern the objectives behind the brewing conflict. The first part of the agenda is not deeply hidden - the war should:

•   help switch the attention of the Western population from the crisis to the fight against a “global enemy”;

•    create conditions for writing off the sky-high sovereign debts;

•    stop the US slide towards a new great depression, revitalize the country's economy and give it a fresh start;

•    re-institute the US leadership within the world system;

•    perpetuate the existing financial order based on the broadly interpreted Washington consensus and the status of the US Federal Reserve as the global money-printing factory.

The same agenda, however, includes a taboo part – the plan is supposed to guarantee the survival of Israel which retains the occupied Palestinian territories and can only exist in the settings of permanent confrontation with its neighbors, provided that the West unwaveringly supports it and the Israeli military superiority in the region continues into the future. So far, Israel has had a potential to crash practically any coalition of Arab countries, while its regional nuclear-arms monopoly serves Tel Aviv both as  a means of containment and a safeguard in case an armed conflict does erupt and takes an unexpected turn. Israel absent the enemies surrounding it – a small state with no natural resources on premises – is a picture impossible to imagine. The reason why these days Israel desperately needs a great war are:

•    the outbreak of war would make it impossible for the crisis-ridden West, especially for the US, the country accounting for 22% of Israel's foreign trade and known to pour an extra $3.71b into it in direct aid, to terminate or to considerably reduce support for Israel. It is worth mentioning in the context that Germany paid the last portion of compensations to Israel for World War II crimes in 2011. Under normal conditions, propping up Israel alone may seem too heavy a burden for the US;

•    the war would put an end to Iran's nuclear program and spare Israel any potential regional rivalry in the nuclear arms sphere.

The third and, arguably, the top secret part of the big war agenda is the rebuilding of the global colonial system.

Classic colonialism dominated the world for over five centuries and was partially pushed off the global stage only in the second half of the XX century when the USSR established itself as a world power.  At the moment, one gets an impression that, due to the logic of the Western economic development, the brief post-colonial interregnum is nearing the end.  Under pressure from competitors, the Western economic system is sustainable only as long as it can draw additional resources from the outside. It's stability takes the existence of a subordinate periphery supplying the world system core at affordable costs.

The recent developments - from the seizure of Iraq and Afghanistan to the rape of Libya and the spill of the Arab Spring - leave no doubt that the world system periphery faces a new round of colonial conquests. The geopolitical process is likely imminent since a power capable of mounting serious opposition to it is completely missing in today's world, and the only aspect of the situation that currently remains unclear is whether the revival of colonialism will follow a bipolar pattern, with the US and the EU securing a grip on the rest of the world, or some sort of an alternative colonization model is going to emerge.

The world subject to a new wave of colonization will see a sweeping re-codification of the international law and a full scale-demise of its former Yalta-Potsdam framework. The transformation will include a definitive departure from the underlying principles of the UN charter, the elimination, on an institutional level, of the permanent UN Security Council membership, and radical adjustments to the notion that sovereign countries should be treated as equal partners in international politics.  In a not-so-distant future, occupation and colonization - if perpetrated in the confines of "recognized" spheres of influence - will be legitimized as substitutes for self-determination and sovereign nations' rights to stay insulated from meddling. The West is already restoring the two-level format of the international relations which allows complete sovereignty exclusively to the countries belonging to the world system  core and leaving the periphery with strictly the amount of decision-making freedom transnational corporations can painlessly tolerate.

Z. Brzezinski expressed with utmost clarity the view that the pillars of the new (colonial) order should be the Greater West (the US and the EU) and the Greater East (Japan, India, Turkey, and Saudi Arabia), meaning that no role is awarded to Russia in the future global politics. Even at present, for example, open talk about imposing international control on Siberia is no cause for embarrassment, and it will take little time before the concept surfaces that the contemporary Russia is the successor to the Russian empire which, in 1884, signed the convention which called for the "efficient occupation" of countries evidently unprepared to handle their own assets. It may happen sooner than anyone can expect that the "efficient occupation" gets a line in the adopted international code of conduct and Russia is confronted with the threat of seeing its right to its natural riches revoked.

NATO is an existing and successfully tested instrument of the new colonization.  The alliance's fresh strategic concept sealed in Lisbon in 2010 states in a thinly veiled form that maintaining the structure of the world system comprising the core and the periphery as necessary for the Western world's well-being must be a part of the NATO mission.  The above is the quintessential aspect of the new vision for NATO: the group of Western heavyweights is bracing for new crusades which have always been economically motivated, and the world's regions supplying commodities will imminently come under military pressure.

At the moment, the West cannot coexist with countries combining ownership of extensive natural resources with geopolitical might. The West may go on pretending to be unaware of the nuclear arsenals of Israel or Pakistan, a country with chronically poor governance that can't or doesn't try too hard to throw out the Talibs, but the spotlight sticks to the energy-rich Iran with its claims to regional leadership, even though the country is a signatory to the Nuclear Nonproliferation Treaty. By all means, Iran's nuclear program is nothing more than a casus belli - even with no trace of interest in nuclear technologies, the country would still be in big trouble.  Moscow should, in the meantime, keep in mind  that it  is destined to be the next target after Tehranas the same Brzezinski said that in the XXI century the US would develop against Russia, at the expense of Russia, and on the ruins of Russia.

Among other objectives, the big war planners obviously hope to prevent the rise of the Eurasian union. It is clear that their global design implies distributing the resources contained in the post-Soviet space among the Great West and the Great East, and the point of the current projects like Europe from the Atlantic Ocean to the Urals is to integrate Russia into the Western world while amputating its Siberian part. Russia will have to endure plenty of arm-twisting at the upcoming G8 forum in Camp David supposed to coerce it into giving up the support for Syria and Iran and the Eurasian initiatives, as well as to make Moscow subject its tactic nuclear weapons stockpile to deep cuts. Russia will be offered some perks in return, but cannot rely on China's standing by it, since the Russian comeback exposes China to unwelcome competition in Eurasia.

The lesson stemming from the entire history of the relations between Russia and the West is that Moscow's beliefs in the possibility of a partnership with it eventually prove to be illusions.  Similarly, the history of big wars convincingly demonstrates that the benefits are typically ripped by the countries which are the last to step in.  The approach clearly guarantees the wise a place in the ranks of winners. B. Borisov was absolutely right when he wrote in 2009 in his Damned World: "The creation of a geopolitical configuration akin to the Eurasian union that would make it possible - thanks to the aggregation of coalition might to the formation of buffer zones - to delay Russia's direct entry into the war (which will not necessarily span the metropolitan territory) should be regarded as a priority in Moscow.  Essentially, Russia's dilemma is to choose between putting together a bloc right now, while there's still some freedom of maneuver, or doing the same under the pressing circumstances of combat.  It must be taken into account immediately that the opportunities to reshape the political landscape on the territories and adjacent to the Russian borders - as it was done in the wake of the recent conflict with Georgia -  are evaporating day by day”.

Speaking of the reasons why Russia must not slash its tactical nuclear weapons, one can overlook the fact that for the country, which risks to be the weak side in the coming war, those may be an efficient instrument of damping that conflict at its early phase. Lacking the tactic component of the nuclear warfare, Russia will have to either capitulate or opt for an all-out nuclear nightmare.

Russia is being deliberately and persistently guided towards a big war. By the end of it, Russia will be irreversibly erased from history. Whatever decisions are being made by the Russian administration, the pertinent question should be how they are to help the country make it through the coming Big War and gain a decent position in the world after it. Above all, Russia should be mindful of the simple truth that its strategic and tactical nuclear arsenals are the only forces it can always rely on.

The views expressed in this article are the author’s and may not necessarily represent those of Russia & India Report.

The article is originally published in Stratecic Culture Foundation