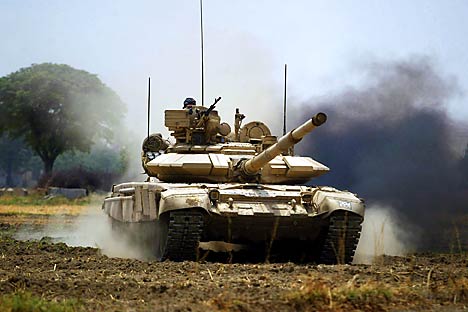 Some federally funded programs meant to improve the quality of life for Russians may be dumped in favor of higher military spending.

With concerns mounting over Russia's budget shortfalls, the government has been trying to maneuver its way out of some extravagant election campaign promises made by President Vladimir Putin. A major part of the government's effort is directed toward slashing entitlements and cutting social spending while increasing spending on defence and defence-related programs. In addition to pumping taxpayer money into the military-industrial complex, about a third of funds allocated to the federal targeted programs this year will be spent on the country's struggling space industry and the development of Siberia and the Far East, according to a priority list prepared by the Economic Development Ministry.

Items such as the development of the nuclear weapons, the space program and the military-industrial complex featured prominently on the list of 18 priority programs unveiled by the Economy Ministry last week. But while the ministry earmarked 30% of federal funds to such programs, it has also reduced spending on socially significant programs like healthcare, social security and housing, and pushed back the deadline for their implementation, the pro-Kremlin newspaper Izvestia reported last Wednesday.

The recent financial crisis has forced the federal government to slash about 1.1 trillion rubles ($37.3 billion) in its targeted investment programs in addition to freezing a number of federally funded projects, said the paper. But despite the prime minister declaring victory over the financial crisis in 2010, the government has been hard-pressed to compensate for the shortfall, the paper said.

In order to maneuver its way out of the situation, the Economic Development Ministry has proposed that the government should sub-allocate funds to certain federal targeted programs and protect such funds from being cut or eliminated. In addition to the nation's nuclear weapons and nuclear reactor programs, other priority programs whose funds should be sequestered according to the ministry are civil and marine engineering, the Russian Black Sea fleet and the Glonass satellite navigation system. The space agency Roscosmos announced on January 17 that Glonass could, for instance, consume up to 20.55 billion rubles ($698.5 million) as it prepares to launch three more satellites in the first half of the year.

In terms of socially significant projects, only the development of pharmaceuticals and the healthcare industry and the planned development of the Far East and Trans-Baikal made it onto the ministry's list of protected programs. Despite protests from the Finance Ministry, it is clear from the list that the government is steaming ahead with plans to create a controversial state corporation for the development of Siberia and the Far East. The corporation, which is expected to receive enormous powers and tax benefits, may control government holdings valued at more than 500 billion rubles ($17 billion), according to a proposal submitted last month by the Economic Development Ministry.

On the other hand, some previous national priority programs, including the money-gobbling North Caucasus economic development plan, did not make it onto the new priority list, together with a previous federal program for the restoration of the economy and social infrastructure in Russia's restive republic of Ingushetia and the Chechen Republic. The State Housing Program, which the government promised would solve the ever-pressing housing issue for Russians by 2015, was also crossed off the list. Along with it, a raft of other programs aimed at restoring soil fertility and developing the rural areas, the fishing industry, youth and sports were pulled.

But analysts say the prioritized federal targeted programs, which the ministry touts as a way to chip away at wasteful spending, would in fact slash social spending to the bone and hit hard at social services, including healthcare and education. In the past, the Russian prime minister himself has come down hard on state officials for failing to implement targeted federal programs, despite the huge state resources allocated for the purpose. "I often recall the ‘battles’ for budget resources at the budget preparation stage,” Putin told a March 26 meeting on the implementation and financing of federal targeted programs. “So what happens to all that zeal and enthusiasm when it comes to implementing the projects? After all, these resources were diverted from other sectors," Putin said, according to a transcript of the meeting on the government’s Web site.

The decision to reorient priority programs toward defense and the Far East was made during the election campaign period, said Yelena Matrosova, director of the macroeconomic research center at the BDO Unicon consultancy. "With the crisis raging in Europe, the growing interest in the Far East is understandable,” Matrosova said. "The future of the Russian economy lies over there. However, one can only wonder why some projects meant to support domestic manufacturers after the country’s WTO accession have failed to make it onto the Economy Ministry's priority list.”