Filatov: "Chess is a unique tool for promoting the country's culture" 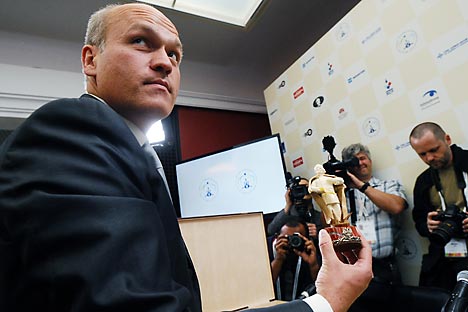 Last Thursday the State Tretyakov Gallery hosted the opening of the main chess event of the season: the match for the world title between Viswanathan Anand and Boris Gelfand. The initiator of this duel in Moscow and its main sponsor, Andrei Filatov, one of the shareholders of the N-Trans Group, told Kommersant correspondent Alexei Dospekhov why he decided to invest in chess, in what ways it’s going to change the economy, and how it’s linked to Russian art.

I am, of course, primarily interested in your motivation. Why are you financing the match for the world chess champion title? Is it a contribution to your image, a desire to help the sport that you were seriously involved in as a youth?

A country that is fighting for all the major international events – the APEC Summit, the Olympics, World Cup, Universiade – simply cannot miss a competition in which it was once one of the main symbols. Boris Gelfand, my student friend, when he won the Candidates Tournament in Kazan last year, told me that the venue of the match had not yet been determined and that there were different rumors about whether it would go to India or somewhere else… It became clear that Moscow hadn’t applied. I thought about it and decided we needed to try. If Moscow’s bid won, the country would get a serious competition that hadn’t been held in modern Russia. Then later this themeevolved from the perspective of the current status of chess, the new chess economy, the main points on which it can be based.

And what are the points?

The first big question was the return to state funding of chess. The match will be held at an iconic museum. Why? You know that Viswanathan Anand is a national symbol of India and an idol who, when he won the title, was met at the airport by 50,000 people, more than Yuri Gagarin in 1961. His match with Gelfand will be followed by a huge country, hundreds of millions of people. Holding such tournaments can attract the attention of millions of people, promote the culture of its city, its country, improve its image and attract tourists, increase interest in our art. Chess is a unique and cost-effective tool for promoting the country, culture and ideas, and I’d like to believe that the state will see that.

And, of course, it’s important that the match will awaken an interest in chess inside Russia. Children will start to play it.

The government may itself enter this sphere as an investor and hold a tournament, for example at the Battle of Stalingrad Museum. Then the whole world will learn that this battle took place: as sad as it may be, many do not know and do not remember it.

Good, that’s the first point. And the next?

I am confident that this is a big new economy for the tourist and museum business. Some cities improved their image so much with the help of international chess tournaments that they eventually received substantial financial dividends. Another point is the very history of the museum. We specially found the data: in Russia, the number of people who visited the museum in the past year was 81 million. This is an incredible figure, when you get down to it. If our museums develop their own brands, and if they draw attention, that means there will be an interest in our art in general, in our culture.

You really think that Russian and Soviet art is something that’s undervalued?

Of course! Not a single country experienced more serious upheavals in the twentieth century than Russia: the war with Japan, the revolutions of 1905 and 1917, World War I, the Civil War, the Great Patriotic War, famine, repression… all the experiences, these incredible emotions, are visible in the works of Russian artists. Certainly French Impressionism is beautiful. But when Russian Impressionists depict life, there is a different intensity of emotions. Think of “Bathing of a Red Horse” by Petrov-Vodkin. Or Laktionov’s “Letter from the Front” at the Tretyakov Gallery.

The development of museum brands is, in my opinion, mandatory, including in terms of drawing money to the country. The Louvre makes a billion a year. And the idea to promote them through an international competition seems very promising. As far as I know, a tournament is being planned for a museum in Liverpool…

Do you, as a pioneer, already have successors?

Rather, I am a successor. Do you know that this idea was already realized? And do you know by whom? Stalin. In 1935 a tournament was held at the Pushkin Museum. The Soviet government demonstrated to the world that the Soviet Union had not sold off Russian cultural heritage.

Again, I very much hope that we will make a breakthrough. That this event, the entire Russian art market will grow. What if weattract investors from Asia? Suddenly a picture from the match so touches the heart of some billionaire from India that he says, “I dream of having that Shishkin!” He’s never seen such woods as in those paintings—the Russian forest!

It’s hard to believe that you weren’t thinking about yourself.

No, of course I was thinking about myself. Who was I before the match? For the most part, an ordinary entrepreneur.And then The Times and Kommersant are asking me for interviews… For many entrepreneurs this may be some kind of example. We have thousands of wealthy people. And if those wealthy people did the same, we would be living in a different country. And society’s attitude towards entrepreneurs would change.

Besides the Tretyakov Gallery, did you have other options?

We thought about the Pushkin Museum––it’s marking its centennial this year. But we settled on the Tretyakov Gallery. It is this museum that holds Russian riches that were created in the twentieth century but of which the world knows little. For example, the artistic symbol of the match is Viktor Popkov’s painting, “The Team Is Resting,” which depicts workers playing chess. The artist Popkov, unfortunately, is not widely known. And he was the only one of our painters to win the Paris Biennale. He is the only artist whose student work was bought by our best museums during his lifetime. That’s genius.

I take it that this match won’t be a one-time event for you?

Let’s see what happens with this. But, I must admit, there are already other plans. For example, to organize a major French-Russian tournament, the Alexander Alekhine Memorial.

What, in the end, was the budget for the match? I’ve heard the figure is about $5 million. Is that true?

Alas, we capped it at that mark.

People from the chess community told me that you might become a candidate for the post of the head of the RCF Supervisory Council in the event that ArkadyDvorkovich for some reason leaves. Is this true? Do you have such ambitions?

I have no such ambitions. And a second point: it seems to me that the very model that is now used in the RCF, and in other federations, with boards of trustees isn’t right. There should be normal elections for the heads of the organizations, as there were before. The whole complex system needs to be simplified, to make the Federation a clear, democratic institution.

You admitted that you are still friends with Boris Gelfand. You’re not afraid that because of your friendshipViswanathanAnand, the world champion, will find himself in an awkward position in Moscow?

Our mission is to ensure a worthy organization of the match, not the victory of a particular chess player. And to make sure that no one during the match has any kind of advantages over his opponent, an honest competition will be held. During the match, I have no right to show any kind of sympathies or preference. To be honest, this is hard, but I promise that I will stick to this line.

Russian text is published in Kommersant