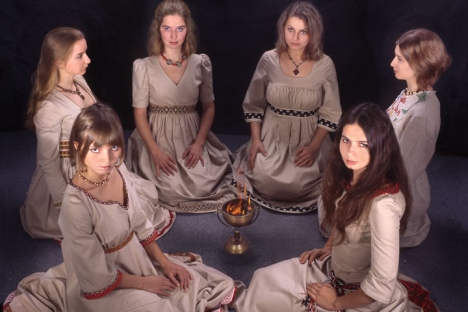 Six young Muscovites have teamed up to form White Light, a folk band that is attempting to resurrect a musical tradition that is now nearly extinct – the ritual chants of Russian peasants.

Yekaterina Rets, one of the founders of White Light, spoke with RBTH about the magic of Russian folk singing and the cultural revolution taking place in Russian villages.

Russia Beyond the Headlines: What kinds of songs do you sing?

Yekaterina Rets: We are trying to embrace central Russian traditional peasant music. The old ritual songs are genuinely interesting. Such music has a large number of harmonies. This actually makes it closer to ancient Greek music and sets it apart from classical music, which is based on a single modal system. The sound of the songs is old, and they are permeated with old imagery. They are absolutely strange to the ear of contemporary people and difficult to comprehend.

At first, I listened to them, but could not reproduce any. I simply could not remember the tune: it seemed to me that there was absolutely no logic to this music, only a subtle vague harmony. Now, after five or six years of studying them, I cannot imagine how one could not be moved by these sounds, and not follow them.

RBTH: Is there a similar singing tradition in the modern culture?

Y.R.: Russian folk music was related to the pan-European tradition, but a very old one. The music we now call classical actually originated from such tunes. With time, this music was dropped from everyday use, and ritual songs were forgotten nearly everywhere in Europe. Russia, conversely, largely due to its inertia, maintained its ancient way of life for a long time, which is why, possibly, the old Russian singing tradition has been preserved. Russian ritual songs can be compared to the tunes of wild African tribes, or ancient Indian chants. These traditions are of the same magnitude – absolutely ancient.

RBTH: How do your friends and acquaintances react to your hobby?

Y.R.: For most people – especially those living in Moscow – it’s fairly exotic. For a long time, the old Russian musical tradition was a monument to antiquity and was only studied by linguists and ethnologists. It was not available or known to the broader public.

The first question I usually get is: “What kind of music is that? Kalinka? Like the Igor Moiseyev ballet?” Unfortunately, contemporary Russians often tend to be as ignorant of the traditional Russian music as foreigners. For many of them, all they know about the origin of the Slavic musical culture is limited to a number of clichés that have little to do with the actual state of things. At our shows, we are trying to close this knowledge gap, at least for our friends and people who are interested in the subject. Luckily, our audience increases with every concert.

RBTH: Are you more like an archaeologist searching for artifacts, or a fan trying to revive an old culture?

Y.R.: Well, the old Russian singing tradition is not completely extinct. Its last practitioners, although they are now 70, 80 or even 90 years old, are still alive. You can still come to their villages, talk with them, and listen to them sing the songs. This is actually what we do. We have already traveled far and wide across the Bryansk, Kaluga and Kursk Regions of Russia.

When you come to a certain location, the tradition you had been studying from records suddenly springs to life. You are engulfed in serene happiness, and your emotions from singing become much stronger than before. Sometimes, however, when we come to the birthplace of a certain song we realize that the tradition is now gone with its last bearers. Nothing remains of it. In such cases, we feel devastated with a sense of irretrievable loss. So comparing the search for the origin of the singing culture with archaeological excavation is inadequate: songs, unlike fragments of pottery, disappear when the people who sing them die.

RBTH: Which of your folklore trips across villages left the strongest impression on you?

Y.R.: I was deeply impressed by our trip to the Ostroglyadovo village in the Bryansk Region. We came there searching, as we usually do, for singers of the local traditional songs. It turned out that none of them were still living. We were welcomed by their daughters, who themselves were 70 or 80 years old at that time. One of them asked us to sing a few local songs for the villagers. At first, we were received rather coldly, like strangers. But the songs gradually grew on the people. And, with frustration and desolation, they realized that they had overlooked an enormous part of their culture and wiped out the life of their ancestors when they settled down in front of their TV sets or plunged into their everyday routine. But you cannot really get away from your ancestral memory. As they listened to the songs that they knew from their childhood, they became aware of the magnitude of their loss.

RBTH: Why do you think we are so disconnected from the cultural traditions of our ancestors?

Y.R.: After the revolution, peasants were carried away with the promise of a “better future.” According to the communist theory, to achieve this new prosperity, they had to abandon their old way of life and shake off everything that reminded them of their past. So they cast away their old lifestyle together with their entire culture, aggressively and without regard. The complete change in lifestyle led that generation to renounce their ancient cultural traditions together with their old way of life.

RBTH: Is there a chance that we can preserve the traditional folk culture against the backdrop of rampant mass culture? What do we have to do?

Y.R.: What do you mean by preserve? Digitizing all songs, putting them in an online directory and opening up public access to them? This would be quite easy to do. How to go back to our roots, however, is a different matter; it means keeping the culture of old songs alive as an everyday practice. This is hardly possible. As our lifestyle changed, this tradition was not passed on by an older generation to a younger one. We could try to artificially instill it in our lives today, but that would not be proper preservation. On the other hand, if it could inspire young folk bands out in the countryside to learn and perform the songs of their grandfathers, it is really worth a try.

RBTH: Is it possible to popularize this music using contemporary arrangements or ways of presentation?

Y.R.: Personally I am against “embalming” this culture like Lenin in the mausoleum, and keeping it locked behind seven seals. That way of life and that culture are now gone. We can hardly be expected today to hitch up a plow and plow the soil. Changes in traditional culture are inevitable and even necessary. Tradition is not a lifeless thing. A contemporary urban society comes with a new tempo destined to have its own impact on tradition. Even every singer brings in his or her own perception of the songs. In the old days, any woman who sang the songs was permitted to make slight changes in the lyrics or the tune to her own liking. It was a very flexible musical tradition. Certainly, it also had some canons, but on the whole this singing culture was a living tradition, and therefore inconstant.

As for modern arrangements, they need to be very good. You can even mix them with Bossa Nova, provided that the musician deeply understands their connection with Bossa Nova. The main thing here is to avoid making it sound artificial.

Whooping is a very loud sound repeated now and then in ritual chants when the singer hits a very high-pitched note. If repeated at equal intervals, such sounds influence the mind and consciousness immediately and facilitate trance.

Singers of old ritual chants usually define whooping as a way of transcending into the world of ghosts. As old Slavic legends have it, interactions with the ghosts of the ancestors and nature require a certain state of mind, which was helped along by sacral signing. The whooping tradition in singing is characteristic of the Bryansk Region.