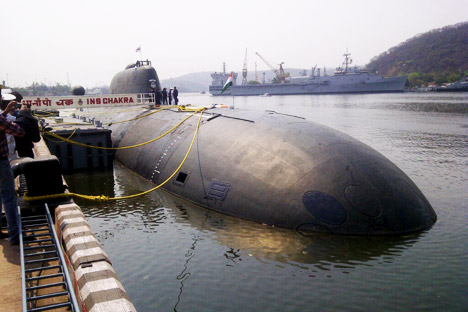 INS Chakra was inducted into the Indian Navy on April 4. Ambassador Kadakin graced the solemn ceremony at Vishakhapatnam. Source: Kommersant

In his third presidential term, Vladimir Putin, the architect of special and strategic partnership between India and Russia, is set to drive up bilateral defence ties to new heights.

As an architect of strategic partnership between India and Russia, President Vladimir Putin has been the driving force behind closer military-technical cooperation between the two countries. Ever since he became the Russian president after the transfer of power by Boris Yeltsin over a decade ago, bilateral defence ties have steadily climbed new heights.

In his third presidential term, Putin is keen to give a further boost to the military-technical cooperation between Moscow and New Delhi. This was evident from his campaign speeches during which he praised Russia’s closer defence ties with India than with any other country, including China, and promised to carry on cooperation in this sphere with full dynamism. “As far as joint defence projects are concerned, we have advanced farther with India than with any other country, including China,” Putin said at one of his campaign meetings with Russian defence and security experts, a week before the March 4 presidential polls. He was referring to the ever-growing number of Indo-Russian joint projects, including the BrahMos supersonic cruise missile, the Akula-II class “Nerpa" attack nuclear submarine, the multi-role transport aircraft (MTA) and the fifth-generation fighter aircraft (FGFA). “We are very actively working with Indians on the transport plane. They have joined us full swing in the work for the Perspective Aviation Complex for Frontline Aviation (PAK-FA), T-50,” he said.

A great champion of traditional friendly relations between India and Russia, Putin has always been stressing that India had been Russia’s strategic partner for decades by virtue of a near complete concurrence of the geopolitical interests of the two countries. Even in St Petersburg following the collapse of the Soviet Union, when Putin was serving as the head of the division of foreign economic relations, under the-then mayor Anatoly Sobchak, he virtually acted as the deputy mayor that had many major defence projects connected with India like submarines for the Indian Navy.

When he was Russian Prime Minister under Yeltsin, Putin handled much more important defence and security issues in relation to India directly.  That is why Putin understands so well India’s needs and the importance of bilateral military-technical cooperation as a key pillar of the strategic partnership in the fast changing global geopolitical landscape.

Only within a few months of becoming Russian president, Putin paid an official visit to India in October 2000, during which he signed the Declaration on Strategic Partnership, in addition to 16 other agreements, including the inter-governmental agreement on the establishment an Indo-Russian Inter-Governmental Commission on Military-Technical Cooperation (IRIGC-MT).

Since his first official visit to India, the first one in about eight years by a Russian president, Putin steadily steered the strategic partnership into a new trajectory, supplying India with the state-of-art defence technologies in building military aircraft, ships and submarines and most modern tanks, including T-90 main battle tanks (MBT).  Most important, Putin’s tenure saw the evolution of military-technical cooperation from the “buyer-seller” relations into jointly designing, producing and marketing of defence technologies.

In March 2010, Putin as the Russian prime minister paid his landmark visit to India, during which the two countries signed three multi-billion contracts on military-technical cooperation, including the sealing of the long-delayed renegotiated deal for the complete modernisation of the heavy aircraft carrier Admiral Gorshkov (renamed INS Vikramaditya), delivery of MiG-29/KUB carrier-based fighters, the fifth generation fighter aircraft project and development of multi-role transport aircraft.

It is due to this array of initiatives Russia continues to account for up to 70 percent of India’s total military purchase despite the emergence of new players like Israel, France and the US. The bilateral defence cooperation programme currently comprises about 200 projects.

In early April, Vyacheslav Dzirkan, assistant director of the Federal Service for Military-Technical Cooperation, told the media that India has placed orders for $10.8 billion of Russian-made military equipment to Russia. “Military-technical contracts totaling $6.5 were signed with India in 2010, while contracts signed in 2011 had the value of $1.8 billion,” he said.

According to Viktor Komardin, the Deputy General Director of Rosoboronexport, the increase in annual supplies of Russian weapons and military equipment to India accounts for between 22 percent and 38 percent of Russia’s overall arms exports.

On April 5, Defence Minister A.K. Antony formally inducted the 8,000-tonne Russian “K-152 Nerpa” (renamed INS Chakra) nuclear submarine into the Indian Navy, giving its underwater combat capabilities the much-needed muscle, and making it the sixth navy in the world to operate such a vessel. The long-awaited vessel is on a 10-year lease from Russia at a cost of nearly $1 billion.

The Indian Navy now awaits the delivery of the retrofitted heavy aircraft carrier Admiral Gorshkov. The sea trials of Gorshkov are scheduled to start on May 25 and the trials of all the carrier’s aircraft systems will be launched in June. Under the sea trials, the checks of the carrier’s aircraft systems will include landing tests of the MiG-29K fighters and Ka-31 and Ka-27 naval helicopters on the flight deck.

Under the initial 2004 contract, Admiral Gorshkov was to be delivered to India in 2008, but due to disputes related cost escalation it is scheduled to be commissioned into the India Navy on December 4. “In the early half of the next year, aircraft carrier INS Vikramaditya will sail to Indian shores,” Indian Defence Minister A. K. Antony said earlier this month.

The $1.5 billion deal envisages the construction of three warships.  Teg was laid down in July 2007. Two other frigates – Tarkash (Quiver) and Trikand (Bow) were laid down six months and a year later, respectively. They are to be handed over to India in the autumn of 2012 and the spring of 2013, respectively.

There are currently ten active contracts for the supply of arms to the Indian military, all of which are connected with the licensed production of armaments and military equipment in India.

Russian defence companies are also participating in a slew of major tenders for the supply of military hardware to the Indian Army, including the tender for the modernisation of T-72 tanks. Russian producers have entered tenders for Igla air defence systems, munitions for Smerch heavy multiple rocket launchers and supplies anti-tank rockets.

Putin is set to visit India later this year for the annual summit with Prime Minister Manmohan Singh, which is set to impart a fresh energy to the special and privileged strategic partnership between the two countries.