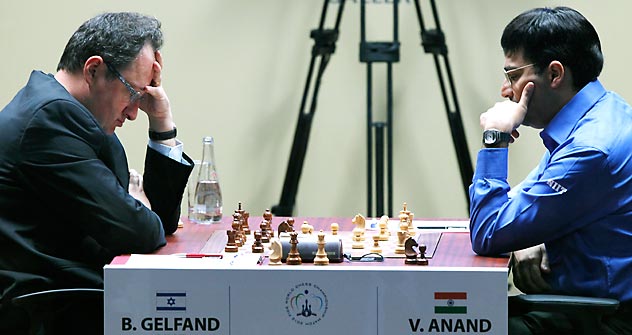 Gelfand and Anand are battling for $2.5 million in prize money in the competition hosted at the Tretyakov Gallery. Source: AP

Though it involves an Indian and an Israeli, the three-week-long World Chess Championship match now going on in Moscow also provides a glimpse of the weird and politically connected Russian chess scene.

The World Championship match features the reigning titleholder, India's Viswanathan Anand, against Boris Gelfand, the Minsk-born grandmaster who emigrated to Israel in the 1990s.

They belong to the old guard of modern chess, having played each other for the first time in 1989. Anand is characterized as the "tiger from Madras," Kirsan Ilyumzhinov, the head of the International Chess Federation, or FIDE, told The Moscow Times. He described Gelfand as a "seasoned cognac."

Speaking at a pre-match news conference, Anand, 42, denied that many years in the spotlight would make their upcoming battle predictable. "People are not static, they are constantly evolving," he said. "And, on top of that, we have both been training for a while."

Gelfand pointed out that the bulk of their professional encounters were in the 1990s and that they have played infrequently over the last decade. Anand, world champion since 2007, is the odds-on favorite to win, despite a recent spell of poor form.

The games, which will take place in the engineering wing of the Tretyakov, will all be streamed online. The challenging task of commentating has been taken on by a revolving team including British chess icon Nigel Short and Russian grandmaster Vladimir Kramnik.

Both Gelfand and Anand said they would try to keep their superstitious tics to a minimum, but Gelfand, 43, admitted that there was one thing he wouldn't be doing under any circumstances. "I definitely won't be eating omelets," he said.

Each game can last up to about four hours. Games are played on two consecutive days with a rest day every third. If the score is a tie after 12 games then it goes to a tiebreak. The pot of prize money, which will be split between winner and loser, is $2.5 million.

Anand began Friday by playing white and held Gelfand to a draw despite the latter's surprise Grünfeld Defense and habit of pacing up and down beside the board. Their second encounter Saturday was also a draw.

The most interesting games will come toward the end of the cycle, predicted Ilyumzhinov, who is famous for his claims to have been abducted by aliens.

"Experienced boxers don't plough straight into the fight, but they circle each other and test each other with blows," he said.

Neither Anand nor Gelfand are actually among the top three players in the world. Anand is No. 4 while Gelfand is No. 22, and the absence of top-flight participants has raised some eyebrows. For the first time, "the match between the legitimate champion and a legitimate candidate won't be a fight for the title of the strongest chess player in the world," former champion Garry Kasparov told 64 Chess Review magazine.

The world's No.1, Norway's 21-year-old Magnus Carlsen, pulled out of the candidate's tournament that Gelfand won to gain the right to challenge Anand.

But the venue was met with widespread praise among players and visitors. The choice of the Tretyakov Gallery was made by sponsor Andrei Filatov, a student friend of Gelfand's who also studied chess.

Gennady Timchenko, the billionaire owner of oil trading giant Gunvor who is rumored to be close to President Vladimir Putin, is also sponsoring the event. Timchenko told The Moscow Times that he backed the initiative because he wanted to see chess have the same standing as it did in the Soviet Union but admitted that he couldn't play. "I don't play chess, I play hockey," he said.

The Gelfand-Anand match will be one of the most interesting in the history of the sport, said Dvorkovich, who is also the chairman of the Russian Chess Federation. Medvedev himself keeps a chess set in his office, he added.