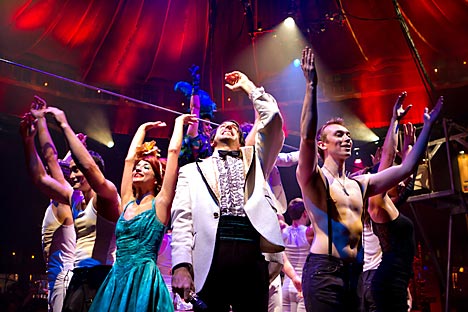 In April, I interviewed former Las Vegas Mayor Jan Jones, who is now senior vice president of communications and government relations for Harrahs Hotels & Casinos, which has its own circus show on the Strip. Absinthe, a tent circus show.

Kim Palchikoff: What do you think of the circus performers?

What's amazing is that if you look at the circus, it epitomizes all that is unique about Las Vegas: the diversity, the entertainment aspects, the talent, the vision, the evolution. Circuses have evolved the same way that the city has evolved, but then it broadens the way they provide the entertainment. People just love it, they're really amazed, it's really nice that our circus is right in the heart of the Las Vegas strip, and outside (not indoors). It’s in a tent; it's got all of the original elements of a circus, but then it goes broader and beyond.

J.J.: When I was mayor, we were more aggressive with our sister city. I thought they were absolutely great, if you look at the relationship that we had with ours, they put a lot of effort into coming and bringing a delegation, and trying to understand who we were, and we were trying to understand who they were, and when you go to their country the level of hospitality - they would show - I think it makes a huge difference.

K.P.: Can countries do that?

J.J.: I think it can. It opens the door for communication, understanding relationship. Everything is built on relationships, and if you've closed the door on building that relationship, how do you ever move forward?