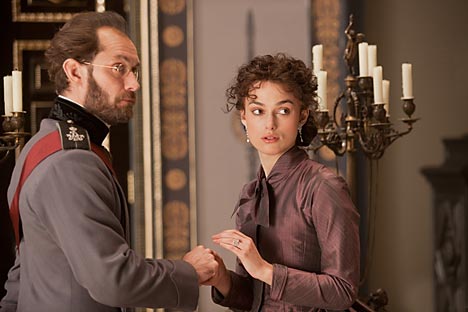 “Anna Karenina” seems to have been written according to a classic movie scenario. No wonder western directors, including Joe Wright of Great Britain, keep screening Tolstoy’s novel.

“All happy families are alike; every unhappy one is unhappy in its own way.” This is the opening of one of the most important 19th century Russian epic novel. Yet, unlike other epics, such as “War and Peace” (the 1812 war against Napoleon) and Mikhail Sholokhov’s “And Quiet Flows the Don” (the Russian Civil War), “Anna Karenina” is not set against the background of major historical events. On the contrary, “Karenina” describes such intimate matters as love, friendship and family values.

The plot revolves around the simple story of a married Russian woman who falls in love with a young officer who woos her and loves her deeply. Yet her growing insecurities and her spurned role in society lead to a tragic end. Anna leaves behind two small children, her husband and her love. She thought her love had become a burden and had spent itself. She thought her life was meaningless.

“‘Anna Karenina’ seems to have been written according to a classic Hollywood scenario: a beautiful 30-year-old woman, strong of spirit, breaks social taboos for the sake of love and gets what she wants, but ultimately pays with her life. The idea of immutable family values triumphs.

If Tolstoy had lived today, he may well have written the screenplay based on his novel and won an Academy Award. “His colleagues would be insinuating that he had cynically foreseen the success of his story and deliberately stuffed it with the right ingredients,” young playwright Nina Belenitskaya told RBTH. Zakhar Prilepin also admires Tolstoiy's novel: “The most important things that happen in life occur between a man and a woman (and between a parent and child, a person and his homeland and a human being and death). These themes are eternal and Lev Nikolayevich depicted them deeper, wiser and more accurately than anyone else without resorting to romanticism or misanthropy. That’s the big secret!“

“Anna Karenina” was published as a serial in a popular Russian magazine between 1873 and 1877. Russian critics were tough on the novel, calling it trivial, but it influenced generations of American writers, starting with William Faulkner.  To this day, universities all over the world teach the novel, and there are entire courses on Anna alone.

Indeed, “Anna Karenina,” so understandable and so philosophical, could not help but win global fame outside Russia. There were nine silent film adaptations of the novel, only two of which were Russian-made. The sound film era produced 15 films based on “Anna Karenina.”

The latest fantasy, directed by Joe Wright, which be released in September, stars Keira Knightley as the troubled heroine. Anna’s dour elderly husband is played by the personable Jude Law, whichcould be interpreted as a certain challenge to Tolstoy’s perception and the Soviet screen adaptation since his character takes Anna’s son away from her when she leaves for another man.

Writer Olga Slavnikova does not share the world’s admiration for Tolstoy’s novel, though she admits that the novel’s popularity is easy to explain:

“Honestly, I am not very fond of this work. I think it is too melodramatic. But perhaps the sentimentality is the secret of its popularity. Many women have sympathy for her hard lot, since Anna lost her child and the man she loved… How many of her peers were fantasizing about taking pills or jumping out of the window. These thoughts are interesting and one feels like watching how they will be put into practice.”

In addition to the heroine’s story, the novel has several overlooked plot lines. One is the story of the Oblonsky family, to which the novel’s opening sentence refers. Karenina’s brother Stepan “Stiva” Oblonsky, a man-about-town, is very fond of his wife, who has given him five children, but he keeps being unfaithful to her. His wife dotes on her children: one of the novel’s most vivid scenes shows her as a loving mother bathing her children. Another noteworthy character, Konstantin Levin, is in many ways autobiographical. Turning his Christian name (Lev) into his character’s last name, Lev Tolstoy portrays a Russian idealist who mows grass with a scythe together with his peasants (Tolstoy, a wealthy nobleman, joined peasants in doing farm work). Levin loves Kitty Scherbatskaya and the Russian soil, but harbors thoughts about suicide.

So the novel is not just about love between a man and a woman. It is a novel about love on a universal scale: love for a mother, children, one’s country and those who are dear to us. These are the lofty matters that engaged Tolstoy’s imagination and thoughts. Surely these thoughts are relevant at all times, especially in this sometimes cruel and cynical age?

“Pirates of The Caribbean” star Keira Knightley (Anna Karenina) is wrapped in fur from head to toe, and Jude Law (Alexei  Karenin) surprises with his dramatically receding hairline in a new adaptation of the classic, yet timely “Anna Karenina.” Directed by Joe Wright (“Pride and Prejudice,” “Atonement,” “Hanna”), the late- 19th-century drama will premiere in London and Moscow in September and in November in New York.

Based on one of the most treasured novels, it was filmed in both the United Kingdom and Russia. Russia’s Karelia and Kizhi Island, known for its ancient forests, were chosen as locations. Oscar-winning playwright Tom Stoppard may be one of a handful of living souls who can live up to the task of rewriting Tolstoy. Notable adaptations include a 1935 version starring

Greta Garbo; a 1948 film with Vivien Leigh; and the 1997 version featuring Sophie Marceau. It is Knightley’s third collaboration with Joe Wright, after “Pride and Prejudice” and “Atonement.”

“We’re always looking for something that’s going to be more difficult or more challenging,” said Knightley in an interview with Popsugar. “Taking on Anna Karenina is a massive challenge. Partly because it’s an 820-page

book and you’re trying to get it down to a 130-page screenplay.”