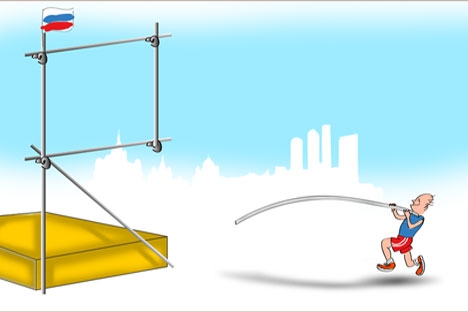 Vladimir Putin has determined his main economic goal for his new presidential term – for Russia to rise 100 places in the World Bank’s Ease of Doing Business rankings, from 120th to 20th.

Almost 10 years have passed since the International Finance Corporation launched the Doing Business report, and finally the Russian government has decided to take its assessments seriously. Both the creator of the report, current Bulgarian Minister of Finance Simeon Djankov, and the World Bank, which strongly supports it, believe the report has already largely achieved its goals of highlighting red tape and promoting reform. Russia has been very slow to address these issues, but now the country is preparing to head off in the right direction and, moreover, very quickly.

Is it realistic for the country to move up 100 places in the ranking in such a short time?

Why not? At the very least, there are precedents for it. And when speaking specifically about Russia, it is important to keep in mind several facts. First, when the 2007 report (representing data from 2005-2006) was released containing the first consolidated rankings, Russia came in the 96th place, so it isn’t unreasonable to think Russia could return to the top 100.

Additionally, in certain areas, Russia's position is already now significantly higher than its general 120th place ranking. In terms of the effectiveness of procedures related to financial insolvency, Russia holds the 60th place; in terms of property registration, it occupies 45th place; and in fulfillment of contracts, the plan has generally been over fulfilled, and Russia has risen to 13th in the world.

Then, there are large regional variations in the favorability of businesses conditions in Russia. In 2009, the World Bank tried to assess the regulation of entrepreneurship in 10 Russian cities across four indicators: company creation, receipt of construction permits, property registration, and foreign trade operations. In that year, Russia, which was represented by Moscow, came in the 120th place (out of 181) in the general rating, just like today. Moscow received the lowest result, the last place in the world, in the area of obtaining construction permits.

If Russia were not represented by Moscow, the picture would have been better. In all nine other cities, approval procedures were better than in the capital. In Moscow, the collection of all documents for construction on average takes 704 days, but in Rostov-on-Don it takes 194, which is closer to the average of 162 days for OECD countries. In Moscow, the number of necessary procedures and approvals is the largest in the world at 54; in Perm, Kazan, and Rostov they are 24, 23 and 22, respectively. In the OECD, there are 15 such procedures and approvals.

It turns out that in Rostov-on-Don (which received a conditional 129th place in the international ranking), it is no more difficult for an entrepreneur to build than Portugal.

Should Russia spend time and effort to increase its ranking? For all its shortcomings the rating is a useful tool for improving the effectiveness of state regulation. The main thing the government should keep in mind is the need to avoid the temptation to restrict oneself to half-measures in these 10 areas instead of pursuing systematic work on a continuous front. A rating can be greatly improved once, but it is only possible to stay on top through sequential continuous efforts.

The latest scientific research also provides additional arguments in favor of the special emphasis given to the ranking. For example, if the country, in the process of competing for a higher evaluation, reduces the registration period for a new business by 10 days, on average it can count on an increase of 0.36 percentage points in GDP growth.

Other experts see a strong correlation between a consistently high ranking, on the one hand, and the state of the business climate and the achieved depth and quality of measures for regulating the business environment, on the other. It turns out that in the final analysis, the Doing Business ranking is not at all a false target.

The economic history of Russia shows that the country has had success with symbolic national projects. Given the traditionally small institutional infrastructure, associated external effects by themselves are so significant that they exert substantial influence on the country's development. "The doubling of the GDP" began as such a project, but the professional community failed to embrace it, and the project's full potential was not realized. Hopefully the new project will meet a better fate.