Conflict in the South China Sea and India’s interests 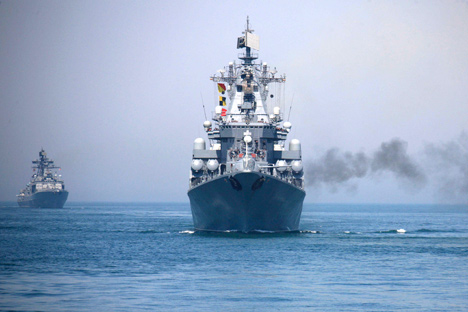 Russian expert discusses India's participation in territorial conflict between China and the Philippines in the South China Sea.

On Friday, India's Foreign Ministry voiced its country's position on the territorial conflict between China and the Philippines in the South China Sea, and called upon both parties to exercise restraint and to resolve disputed issues by diplomatic means.

The dispute between China and the Philippines about the territories in the South China Sea cannot be considered a strictly bilateral conflict. In fact, it is a reflection of a new and growing trend connected with shifting the focus of attention of the world geopolitics from the Middle East region to the Asia-Pacific region. The essence of the conflict lies not only in China’s disputes with its neighbors (which happened with practically all of them) about different pieces of land and the adjacent water area. The underlying reason is that the major focus of world politics - the confrontation between China and the USA, which has long been discussed by specialists in international affairs – is entering an obvious, open phase, thinks Boris Volkhonsky, an expert of the Russian Institute of Strategic Studies.

“The United States is taking active moves aimed at developing military cooperation with the countries of the Asia - Pacific region - stationing troops in Australia, building a base in the Philippines. And starting from the next year the US Navy ships will be permanently based in Singapore, i.e. in the narrowest place of the Strait of Malacca, which can be easily blocked off in case of an aggravation of the conflict and thus China will be almost completely cut off from the deliveries of hydrocarbons from the countries of the Middle East and Africa.

India's position is very important in this context. The thing is that the above-mentioned global trend in Asia is manifesting itself in a confrontation between the two leading powers of this part of the world - China and India. At the same time both parties, loaded with a lot of unsettled contentious issues, are trying to avoid direct confrontation, demonstrating commitment to cooperation and friendly relations. However, the confrontation still exists - it has shifted to some "remote grounds", and manifests itself with all the force there.”

During the last several years China has been actively occupying the Indian Ocean, surrounding India from the sea with a chain of its ports and monitoring stations in the neighbouring countries (the so-called "string of pearls" strategy). India is giving an "asymmetric response" to these actions of China and actively develops relations with the countries of the South China Sea basin, primaring place with Vietnam and the Philippines, i.e. the countries that have the most burning problems in their relations with China.

Boris Volkhonsky reminds that in the recent past India’s activity in the South China Sea led to clashes with China.

“Last August an Indian military ship on its visit to Vietnam was stopped by the ships of the Chinese naval forces and was forced to retreat. At the beginning of this year, China made a resolute protest against an oil field development, which India together with Vietnam had started on a continental shelf, which China considers to be its property. And just the other day the newspaper “Hindustan Times” reported that India's Foreign Ministry had recommended the Ministry of Oil Industry to stop the work on the block No 128 in the South China Sea.

It should be taken into account that the difference in economic and military potentials between China and India is so great, that today it is impossible to speak about parity. That is why India will continue to actively indicate its presence in this and other regions vital to its interests, but it will not start a direct confrontation with China.”

This is a fundamental difference between the positions of India and the USA. Washington’s strategists would very much like to see India as one of its closest allies regarding the policy of China’s deterrence. However, pragmatic reasons are taking the upper hand in the Indian foreign policy so far. And Washington is unlikely to rely on India’s abandoning its line for the sake of supporting the US policy.